P225-A1: Sig’s Single Stack Classic Comes to the US

by Doug Larson
in Guns, Handguns
0

The P225 established a strong following in Europe, where it was issued to a number of government and police forces. Now Sig Sauer is making the P225-A1 9mm in America with a number of upgrades to suit today’s shooters.

A few decades ago, there was a strong trend toward double-stack handguns that carried more rounds than revolvers or single-stack pistols. Some called these guns “wonder-nines” because their chamberings tended to be in 9mm. But times change.

Double-stack handguns are still popular, particularly for military and law enforcement applications. But these days, because many states offer permits for non-sworn citizens to carry a gun out of sight for personal protection, the demand for smaller single-stack handguns has increased. They are easier to carry discreetly than double-stacks.

Back when the double-stack frenzy almost consumed American gun buyers and law enforcement, Sig Sauer continued to produce the single-stack P220 in Europe. It’s a large-framed double-action/single-action (DA/SA) pistol, but customers wanted a smaller, more compact version for situations when carrying the larger gun would be less desirable. So Sig Sauer developed the P225, a single-stack 9mm with the same action and controls.

The P225 was adopted by several governments and police forces in Europe, including the West Germans, who designated it as the P6. Eventually, the P6 was phased out and replaced by another handgun, and lightly used—but carried often—surplus P6s began to appear in the United States. Some people quickly recognized their quality and handiness, and found them to be nice guns for discreet carry.

Now that demand for smaller single-stack 9mm handguns has increased, Sig Sauer has brought production of the P225 to the United States and called the improved version the P225-A1. It’s essentially the same gun with some subtle design improvements, a Short Reset Trigger (SRT) and, according to Sig Sauer, parts that are made to higher quality standards because of improved manufacturing techniques that were not available when the original P225s were manufactured.

The new P225-A1 comes with two 8-round, steel, single-stack magazines with witness holes and steel followers. Their baseplates are polymer and sit almost flush with the bottom of the grip when seated. The magazine well has a wide opening created by the grip panels, which extend below the bottom of the sides of the frame. As the magazine is inserted, it eventually encounters a ledge inside the grip panels and is funneled into the well, making magazine changes fairly fast.

Made for Sig Sauer by Hogue, the G10 grip panels have aggressive checkering on the sides and backstrap to encourage a slip-resistant hold. G10 is an extremely durable synthetic material that consists of layers of fiberglass fabric that are thermally bonded together under pressure with an epoxy resin. The grips are then machined into a desired shape and texture. Each grip panel is held in place with two screws and has a handsome silver Sig Sauer medallion imbedded at the center. The grip panels, combined with the single-stack frame, make for a gun that’s easy to anchor solidly in your hands.

The triggerguard is generously sized and is undercut at the rear where it connects to the frame. This lets you grasp the gun a bit higher, putting the bore axis just a little lower in the hand, which helps control recoil and muzzle flip.

True to its name, the SRT has a short reset that is distinct in sound and feel. The long initial DA trigger press on the test gun was smooth with no noticeable stacking, allowing the hammer to fall after a clean break of about 14 pounds. The subsequent SA stroke broke at about 6 pounds after about 0.25 inches of take-up and just a little creep. In experienced hands, the trigger is no hindrance to accurate shooting. In fact, a skilled shooter with a DA/SA pistol can hold his or her own against another shooter of similar skill using a gun of the same capacity with an SA or striker-fired action. It just takes practice.

The controls are what you’d expect to find on a vintage Sig Sauer and are located on the left side of the frame. The takedown lever is above the trigger, and the decocking lever is just below the slide at the front of the grip panel. Stroking it down when the pistol is cocked lowers the hammer but does not permit it to strike the firing pin. This is a much safer way to decock the pistol compared to riding the hammer down with your thumb after pulling the trigger. Nonetheless, safety dictates that even when using the decocking lever, the gun should be pointed in a safe direction.

The slide lock is to the rear of the decocking lever, and both are easy to reach with the thumb of your firing hand for right-handed shooters. The only other control is the magazine release, which is a checkered button in the usual place behind the triggerguard, where it joins the frontstrap. Because of the single-stack design, most right-handed shooters will have no trouble reaching it with the thumb of their firing hand.

The alloy frame is nicely finished with black anodizing that matches the color of the slide. The frontstrap is finely checkered. Not being steel, the frame is lighter to make the gun a bit more comfortable for long periods of carry. The stainless steel slide rides on full-length rails within the frame and has a black, extremely corrosion-resistant Nitron finish.

The slide has almost vertical rear serrations for a solid grip to cycle the slide by hand. The sights are what Sig Sauer calls “contrast” sights, but tritium three-dot SIGLITE sights are also available. These are excellent, especially in a gun that might be needed for defense in dim light, where most lethal-force encounters happen. The contrast and SIGLITE sights are drift-adjustable for windage.

Unlike earlier versions of the P225 and P220, the P225-A1 has an external extractor. The one on my test gun functioned perfectly during testing, tossing fired brass well clear of the ejection port. 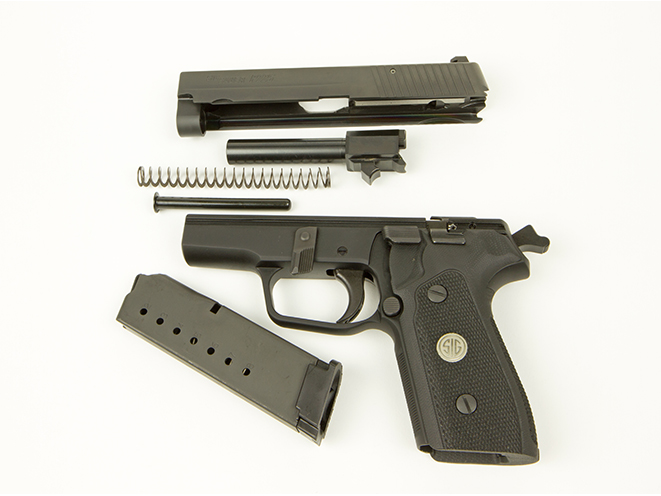 The disassembly process for cleaning or maintenance is familiar to anyone with experience cleaning most other modified Browning locked-breach, tilt-barrel designs. After making certain the gun is unloaded and the magazine is removed, the slide is locked to the rear with the slide catch. The takedown lever is rotated clockwise 90 degrees, and then with a solid grip, the slide is pulled slightly to the rear to release the catch and then allowed to move forward and off the frame. That solid grip must be maintained at all times so the slide does not launch under spring pressure.

Turning the slide assembly upside down, the recoil spring assembly is removed, and then the barrel is separated from the slide. Assembly is in reverse order. The recoil spring is not the familiar braided-coil spring found so often on Sig Sauers. Instead, it’s a flat coiled spring.

The test gun was accurate. At 7 yards, my groups averaged less than an inch. Of course, at greater distances, groups would undoubtedly increase in size but would still be well within acceptable limits for a self-defense handgun. As with all guns, especially those used for protection, you must shoot lots of the same make and type of ammunition to be used for self-defense to make certain it functions without flaws. Only then should that gun and ammo be put into service. A malfunction in a life-or-death situation can cost a life.

Some have criticized Sig Sauer for bringing back the P225, saying the P239 is almost the same. True, the 9mm P239 has a price that’s about $130 less, and it’s of similar size and weight. However, the P239 is not a classic like the P225-A1 and doesn’t have the consumer following the P225 developed. Time will tell if Sig Sauer made a good decision to bring back the P225, but odds are that the gun will be a winner.

This article was originally published in ‘Concealed Carry Handguns’ 2017. To subscribe, visit outdoorgroupstore.com.