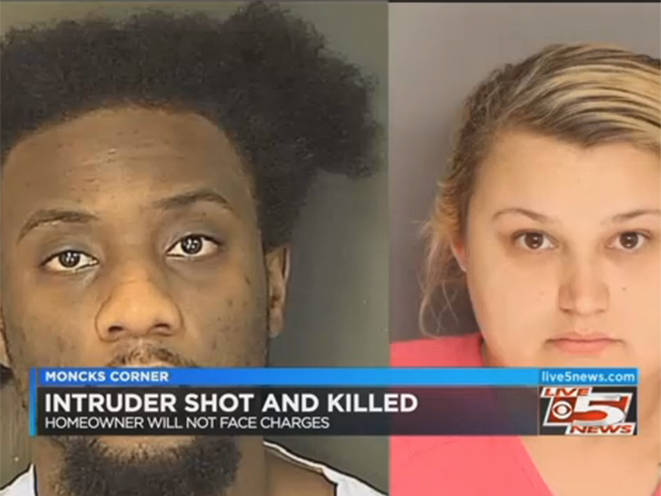 A bad guy wearing a mask and gloves and wielding a handgun with a laser sight ended up getting pumped full of lead by the armed homeowner during a botched home invasion last week.

According to police, a woman later identified as Juanita Marie English showed up at a home in Moncks Corner, South Carolina just after 8 p.m., posing as a representative of a homeowner’s association. She asked a few questions to the female resident about the neighborhood, then signaled to 30-year-old Elijah White Jr., who ran up to the door and tried to force his way in.

The woman attempted to close the door, but White kicked it in and entered the home. At that moment, the woman’s husband came downstairs armed with a gun and opened fire.

White was shot four times and was later found by police dead in the front yard.

“We also retrieved from him rope, which I believe he was going to tie up the victims if he got into the residence, so there was no doubt he was there to do some serious harm to this family,” Moncks Corner Police Chief Rick Ollic said.

English was busted after she was stopped by police for driving erratically later that night. When they stopped her, police didn’t know she was connected to the home invasion, but the homeowner positively ID’d her and a search of the car yielded evidence that linked her to the crime.

English has been charged with first-degree burglary and criminal conspiracy.

Meanwhile, the shooting death of White has been ruled a justifiable homicide.

“In Berkeley County, if you kick someone’s door in and you get shot, as long as I’m the coroner, that’s going to be a justifiable homicide,” Berkeley County Coroner Bill Salisbury said.

“[The victims] are absolutely traumatized,” Ollic told the judge during English’s bond hearing.”The female victim, it’s unbelievable what she went through last night.”

Ollie added that the woman’s two children were home at the time and witnessed the entire thing.

As it turns out, White had an extensive rap sheet that included arrests for drugs, breaking into motor vehicles, armed robbery, attempted armed robbery and inciting a riot while incarcerated. 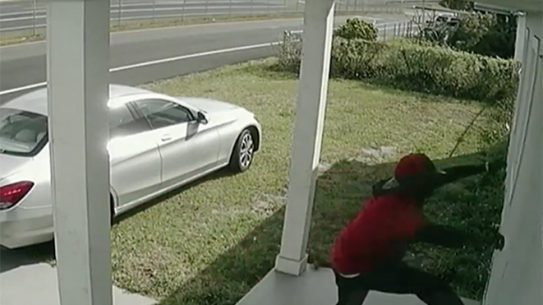 A Florida home invader fled the scene after finding himself on the business end...