High-ranking officers were issued Colt Model 1903 Pocket Hammerless pistols in .32 ACP for WWII duty, and now U.S. Armament is offering quality replicas in the same wartime configuration, with a Parkerized finish, walnut grips and "U.S. Property" stamped on the frame.

As you probably already know, famed firearms inventor John Moses Browning collaborated with several manufacturers, including Colt. After patenting a design for a compact semi-automatic pistol that was produced by FN in Belgium, he offered a similar design to Colt—the only stipulation was that the FN pistol would be for European markets and the Colt model for the U.S. market.

Colt’s version, called the Model 1903 Pocket Hammerless, was designed in 1899 and chambered for the .32 ACP cartridge. This small pistol was a blowback-operated design—the “hammerless” moniker is actually a misnomer, as the pistol had a hammer that was concealed inside the receiver and slide. It soon became Colt’s most popular pocket pistol, with 572,215 made over 42 years, from 1903 to 1945. Although production officially ceased in 1945, there were enough parts on hand to build more of these pistols until 1953. Another 200,000 were made for the U.S. military and issued to general officers in the Army and Air Force as late as the 1970s.

For its era, the Pocket Hammerless was considered rather small with a 3.75-inch barrel, an overall length of 6.5 inches, a height of 4.36 inches, a width of 1.16 inches (at the grips) and an empty weight of 24 ounces—quite good for an all-steel handgun. As a single action, the slide had to be fully retracted to cock the internal hammer.

This pistol featured a grip safety that only allowed the trigger to be pulled when the pistol was properly grasped, and the manual safety lever doubled as a slide lock. It utilized a box magazine that held eight cartridges, with the magazine catch located on the heel of the pistol. Miniscule fixed sights adorned the top of the slide. The front sight was a small, rounded blade and the rear sight had a small U- or V-shaped notch that was fitted into a dovetail cut and could be moved laterally for windage adjustments. The gun was offered with a blued or nickel finish. The standard grips were made of hard rubber, but there were a number of other grip and finish options available from the factory.

With the start of World War II in 1939, the government began procuring Pocket Hammerless pistols. They were marked “U.S. Property” and had a gray Parkerized finish and checkered walnut grips with the Colt medallions. Some of these pistols went to the British Home Guard via the Lend-Lease Program while others were used by the U.S. Navy, the Pentagon and the Office of Strategic Services (OSS).

In the field, general officers wanted to be armed, but most did not want to be weighed down with a large, heavy handgun like the 1911. The Army and Army Air Corps began to issue these high-ranking officers the “government” Pocket Hammerless, where it was known as the “General Officer’s Pistol,” or GOP. Special belts and holsters were procured, and later the Colt Model 1908 Pocket Hammerless in .380 ACP was also issued, though in much fewer numbers.

There was practically no military record keeping on who or when the pistols were issued until the mid-1950s. The .32 ACP cartridge was generally loaded with a 71-grain FMJ bullet with a velocity of around 900 fps. From what I have been able to determine, military-issued .32 ACP cartridges were indistinguishable from civilian ammunition except for a “U.S. Property” stamp on the boxes. The M1903 Pocket Hammerless was popular with law enforcement, especially plainclothes officers and detectives. Outlaws took to it as well, and two were in the possession of Bonnie Parker when she and Clyde Barrow were shot by Frank Hamer and his men in May of 1934.

At a recent trade show, I noticed what appeared to be a brand-new Model 1903 Pocket Hammerless in the GOP configuration in a Colt Custom Shop display case. I immediately spoke to Curtis Wolf, the president of U.S. Armament Corporation, who explained that his company was going to start making licensed copies of the pistol for Colt. Production began months later that year, and 3,500 were scheduled to be made. Of those, 2,000 were to be GOPs with matching “GOP”-prefix serial numbers, 500 were to be given custom serial numbers and presented in special packaging, and the final 1,000 would be blued and could also have some special features.

It wasn’t long before I had my hands on one of the earlier GOP configuration models. The compact autoloader came in a brown carton with a colorful outer sleeve. Inside, the gun and extra magazine were wrapped in the tan wax paper of yesteryear. Also inside the box was a new owner’s manual, a reproduction of the original information sheet and a U.S. Navy Ordnance information sheet. It was a very nice package indeed. The original information sheet has the instructions for taking the gun down for cleaning and maintenance. The wording is a bit antiquated, but I managed to do the deed well enough.

Unwrapping the Colt Model 1903 Pocket Hammerless, I was immediately impressed with its well-executed Parkerized finish. All of the markings on the exterior were crisp, and the metal-to-metal and wood-to-metal fit was outstanding. The fully checkered walnut grips, with their gold Colt medallions, were attractive, and the gun just felt good in my hands, lighter than its 24-ounce weight. All of the metal is a flat gray color with the exception of the barrel, which is visible through the ejection port and left “in the white.”

The sights differed from my original, commercial, circa-1910 Pocket Hammerless in that the test gun had a V-shaped rear sight notch, while my original has a U-shaped notch. Both guns have small front sight blades. Back in the day, I believe sights were just a reference point, as this gun was meant for close-in work.

The GI-style trigger on the test gun exhibited some creep with a heavy pull. And, unlike later Colt semi-autos designed by Browning, the Colt Model 1903 Pocket Hammerless reproduction has a heel-mounted magazine catch.

To carry the Pocket Hammerless, I found a flap-type military holster from World War Supply. The flap is stamped with “U.S.” inside an oval, and a pouch in the front of the holster can carry the supplied cleaning rod. It’s put together with lock-stitched, white linen threading and will fit on a belt up to 2 inches wide. I paired it with a leather 1911 Military Belt from El Paso Saddlery. It’s made of top-grain leather with similar lock-stitched white threading. All of the hardware is solid brass, including the “U.S.” belt buckle. It is adjustable via a notch-and-hook arrangement and is 1.75 inches in width. 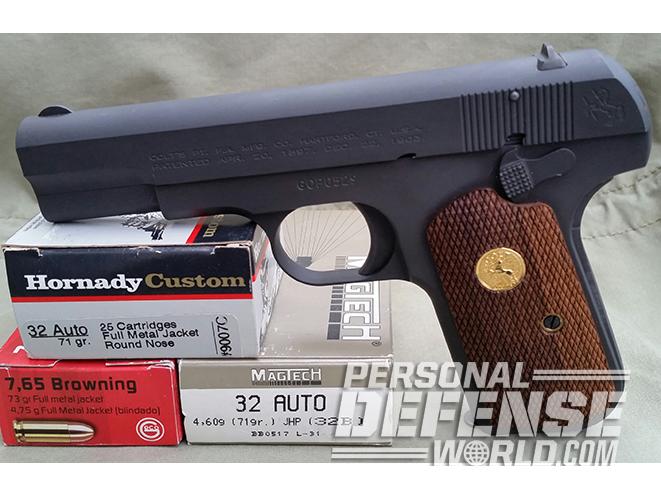 For test ammunition, I chose two FMJ loads from Geco and Hornady as well as Magtech JHPs. The pointed shape of the Magtech bullet allowed it to feed reliably in this pistol, but other JHP loads I tried did not function as well.

I first fired a box of JHP ammunition that I knew wouldn’t feed well, but this was mainly to break the gun in. Surprisingly, the blunt-profile bullets did OK after the first two rounds out of the magazine and were surprisingly accurate. I proceeded to do some shooting from a sandbag rest at a distance of 7 yards. The miniscule sights were a bit hard to use, but a light-colored target made it easier to aim.

The best five-shot group of the day measured 1.12 inches using the Hornady load, with four shots in a 0.56-inch cluster. The overall average for three 5-shot groups with each cartridge came to 1.79 inches, and the pistol shot very close to the point of aim using a dead-center hold. No malfunctions were noted, and the 24-ounce pistol was easy to keep on target. The brass ejected without a hitch, and I didn’t have to chase all over the range to pick up empty cases.

With the two factory magazines and an original that I had on hand, I decided to do some practical shooting. I loaded the magazines with eight rounds of mixed test ammo and put up a B-27 silhouette target at 3 yards. I chambered a round, replaced the cartridge in the magazine and, raising the gun to shoulder level, triggered all nine rounds into the center of the target sans sights. I exchanged my magazines and then moved the target to 7 yards.

This time I fired a series of double-taps using a flash sight picture and again emptied the magazine and reloaded. I moved the target to 10 yards and did some barricade shooting. I fired three shots from the left side, three shots from the right side and two shots from the right side while kneeling. I was rather surprised when I brought the target back in to see that none of those 19 shots had strayed any further out than the 10 ring—and I’d had zero malfunctions. The sights did just fine on the red target center, the weight of the pistol and its checkered grips aided in rapid-fire control, and even magazine changes weren’t that difficult with the heel-mounted magazine release. The manual safety is checkered and easy to use, and the grip safety took no conscious thought.

In the end, I believe U.S. Armament’s copy of the Colt Model 1903 Pocket Hammerless General Officer’s Pistol is deserving of the Colt name and “rampant Colt” emblem. Yes, this licensed copy is a bit expensive, but for the quality it exhibits and the fact that it’s made is the U.S.A., I’m inclined to believe that it’s worth it.