Colt Detective Special: Looking Back at a Classic Wheelgun

by Will Dabbs MD
in Guns
0

Henry Ford once bemusingly announced that his customers could buy his Model T in any color they wanted so long as it was black. While the car had previously been available in several hues, and polychromatic variations were offered later on as well, black was indeed the only color on the lot when he penned those words in 1922. Black paint dried more quickly and subsequently offered faster, more economical production. Mr. Ford was all about fast and economical production.

Henry Ford introduced the world to the concept of the assembly line. His cars subsequently mobilized the planet while simultaneously making him fabulously wealthy. Ford contrived a reliable design and then optimized it for mass production.

For decades, something similar could be said of American pocket pistols. There was admittedly a modest selection of slim semi-automatics available. However, for the most part, if you wanted a decent backup gun, you could have anything you wanted so long as it was a .38-caliber revolver. 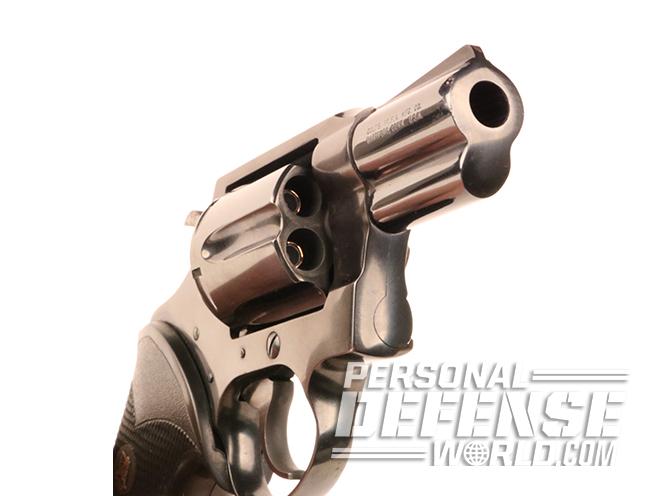 The world’s first snub-nosed revolvers were adaptations of the Colt Single Action Army in the late 19th century. These stubby variants were alternately called “Shopkeeper Specials,” “Banker Specials” or “Sheriff’s Models.” While their shortened barrels did indeed make the otherwise full-figured wheelguns more concealable than their service counterparts, the heavy chamberings and classic frame still lent the weapons a great deal of bulk.

In 1927, Colt introduced the compact Colt Detective Special. Typically sporting a 2-inch barrel and chambered for the then-novel .38 Special cartridge, this carbon-steel revolver entered terms like “snubbies,” “snub-nosed” and “belly gun” into the American vernacular. The Colt Detective Special rendered fine service for decades as either a backup gun for uniformed police officers or as a primary weapon for plainclothes detectives. One of the local law enforcement agencies in my town still issues snub-nosed .38 revolvers as backup guns today.

The Colt Detective Special is a double-action/single-action (DA/SA) design that weighs 21 ounces unloaded. Variations were also chambered for the .32 New Police and .38 New Police cartridges, and there were versions with 3-inch barrels as well. The cylinders held six rounds, and the sights were fixed and open. With the exception of a seven-year period between 1986 and 1993, the Detective Special was in production from 1927 until 1995.

There is a well-attended religion that orbits around the nuances of collecting old revolvers, and I am not qualified to expound on the minutiae that define that particular gospel. Should I hazard such an attempt, I fear I might inaccurately describe some widget and find myself burned in effigy by angry Colt collectors incensed that such a rank amateur might ever have been unleashed behind a word processor. The topic I am now fully qualified to orate upon, however, is what these delightful little guns look like on the inside. 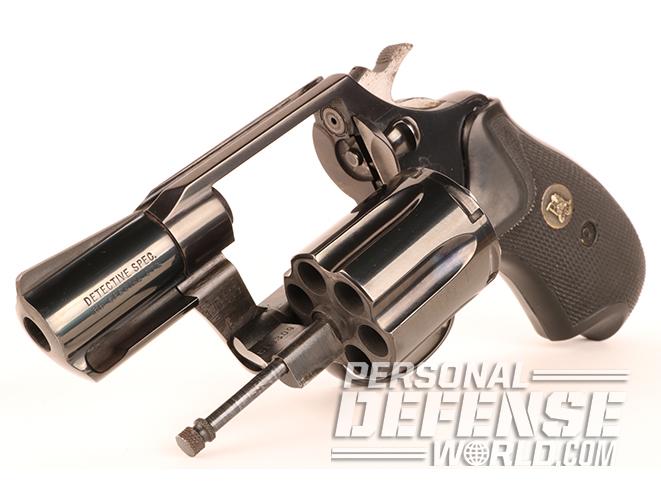 When you write for gun magazines, there is this false assumption that you know everything there is to know about firearms. In this vain, a dear friend recently brought me a sick Colt Detective Special with a plaintive request to “fix it.” The gun was produced in 1972 and was in splendid condition. However, the cylinder would not close. Upon closer inspection, the cylinder assembly had ridden backward ever so slightly on its axis pin and jammed the action open. Intrigued, I settled down at my bench, fetched my tools and performed a bit of mechanical surgery.

The fix was straightforward enough. A bushing of sorts had unthreaded slightly with repeated reloadings and allowed the cylinder to slide backward just enough to deadline the gun. Absent the special wrench required to rectify the problem properly, I danced around this component with a pair of jewelers’ screwdrivers until I got everything back the way Colt intended. What made the exercise so interesting, however, was the subsequent glimpse into the way folks used to make these handguns.

The voluptuous curves of this tidy little pistol lack the harsh geometry of modern utilitarian service pistols. The engineers who designed this gun deigned to square a corner when something rounder and more elegant might do. After a little research, I found that many of the parts on these old guns are not interchangeable absent a bit of hand fitting. These components were intentionally made slightly oversized and then hand-finished by professional firearms assemblers at Colt who had studied since their apprenticeships to build these revolvers. 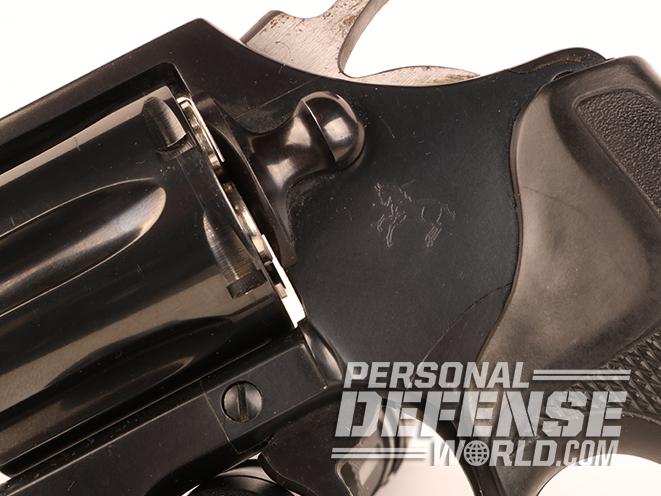 While this approach would undoubtedly imbue Henry Ford with some post-mortem anger, the end result with this old Colt pistol is a fit and finish that exceed the capabilities of modern machinery to reproduce. The bluing is deep and sensuous, and steel glides across steel like greased glass. The cylinder spins like it is magnetically levitated, and the action is inimitably crisp and sharp. The firing pin is fixed to the hammer, and the SA trigger breaks like crystal. However, the DA trigger pull, while still glassy smooth, is long and heavy enough to make for safe pocket carry. The little gun demands a certain intentionality to make it discharge, something that is immeasurably important for a deadly firearm that might end up loose in a purse or in a pocket alongside your most sensitive anatomy. (That’s why you always carry it in a holster!)

The gun packs a full six rounds in a geometric envelope not much larger than a competitor’s gun that carries five. To break open the action for reloading, the release must be pulled to the rear. Compared to the Smith & Wesson version that presses forward, this seems a bit unnatural. However, greater men than I have won many a gunfight armed with weapons so designed. Who am I to judge? 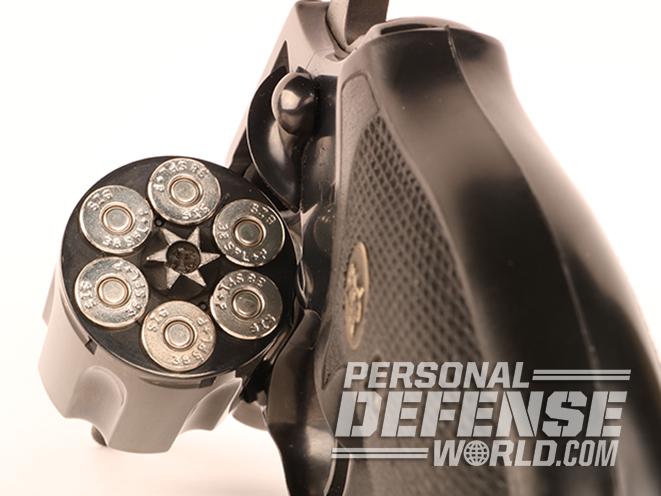 The ejector rod on this particular version is shrouded underneath the barrel. There are others wherein the rod is left free. Once the action is open, pressing this rod backwards drops the empty cases cleanly. The rod is naturally spring-loaded and returns to its resting position automatically. I got familiar with that aspect of the design while I had the little gun dissected as well.

The Colt Detective Special shoots plenty straight for defensive use. I never can seem to drop my rounds to precisely the same spot in both SA and DA modes, but that is undoubtedly a training deficiency. I should always practice more. There are scads of holsters available that pack the little wheelgun into most every anatomical crevice that is geometrically large enough to admit it. 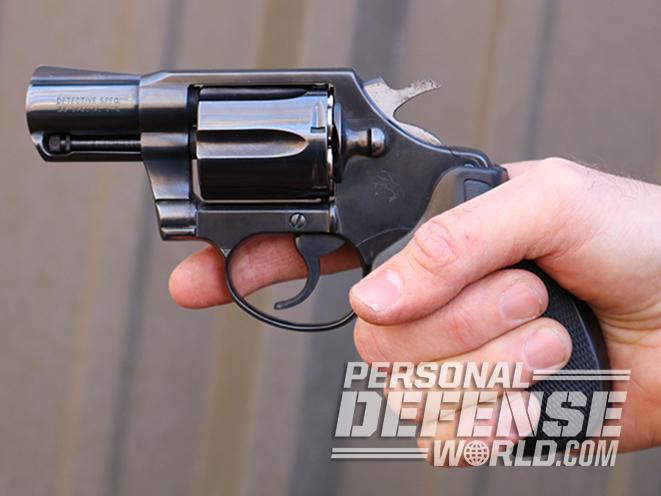 Modern CNC milling machines are great, and I drool over the latest and greatest in firearms just as much as the next gun nerd. However, they just don’t make them like the Colt Detective Special anymore. There is a certain antiseptic sameness to your typical Glock, Sig or S&W service pistol. Fit and function are monotonously identical, and every single component will fit every single gun. Not unlike an iPhone or a Big Mac, every example of the species looks exactly like every other. For an off-the-rack weapon used in combat, universal interchangeability is certainly a desirable trait. But for a time, mass-produced guns were still finished by hand. It was that final interplay between flesh and steel that made the gun perfect, polishing out its eccentricities and imbuing it with its own unique personality.

Such stuff as this brought us Georg Luger’s P08, the Mauser C96 and the Thompson submachine gun. Nowadays, this deep into the 21st century, more human beings around the world have cell phones than regularly use toothbrushes. We expect our machines to take care of the monotonous things so we will have more time to do whatever it is we actually do these days. In a world awash to its gunwales in identical devices, it can sometimes be fun to tear down an old pistol like the Colt Detective Special and see how our forebears in simpler times skinned their cats.