If you’re flying with Delta and you plan on transporting a firearm in your checked baggage, be advised that the airline recently and discreetly rolled out a new policy that adds an extra layer of security when you’re picking up said baggage.

Sources told NBC affiliate WTVJ that baggage containing a firearm will be marked with special tags in order to alert ground handlers not to place it on the general carousel when the plane lands at the airport. Instead, the baggage will be taken to a service agent who will run an ID check on the passenger that picks it up. The agent will then secure the bag using zip ties.

The entire process will be monitored by a police officer who will be on site to watch the passenger pick up the baggage and leave the building.

WTVJ reached out to Delta to get a comment. They received a response that doesn’t touch directly on the new policy.

“Delta is committed to the safety of our customers and employees,” the airline said. “Every day we look for ways to refine processes and procedures with the goal to improve safety and the overall travel experience.”

Thus far, Delta is the only airline to roll out this new policy. TSA rules for transporting firearms and ammunition still apply.

So what spurred this change from Delta? Reports suggest the move was prompted by a gunman who, in early January, allegedly killed five people and injured six others at Fort Lauderdale-Hollywood International Airport. The suspect, 26-year-old Esteban Santiago, reportedly went to the restroom to retrieve his gun and ammo from his checked luggage after picking it up when he got off his Delta flight. It seems a safe bet that the new policy comes as a result of this incident. 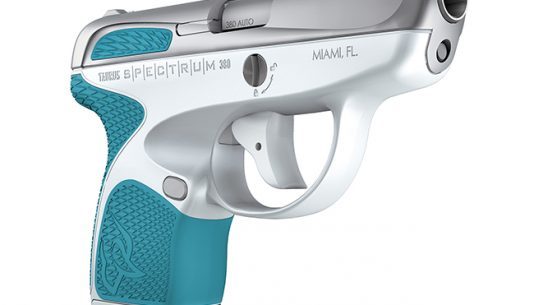 Boasting soft-touch panels integrated into the grip and slide and available in several color...