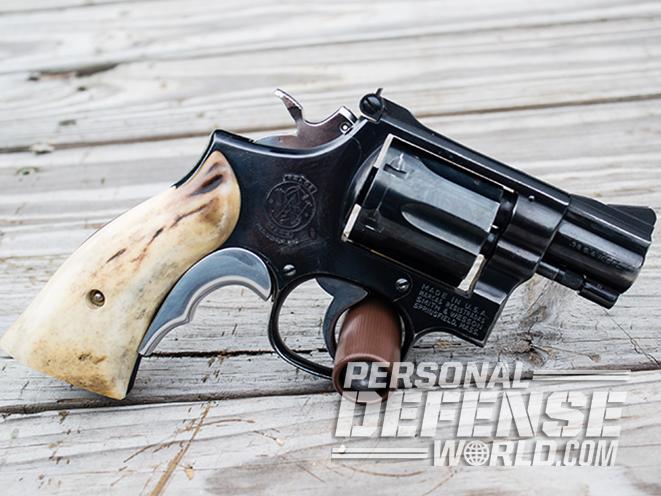 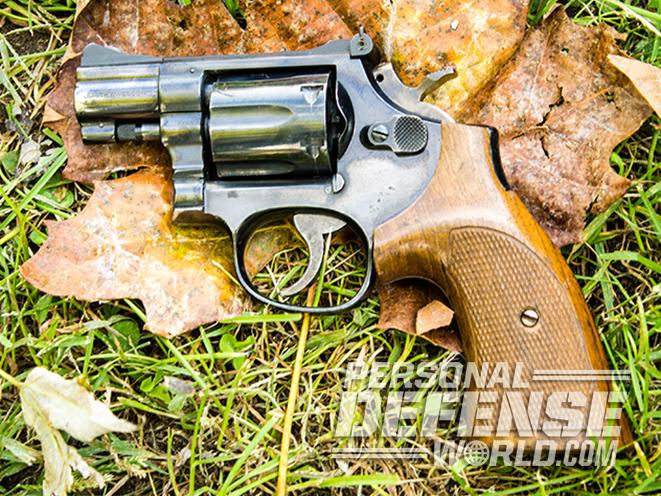 2 of 7
Custom Classic: Rebuilding a S&W Model 15-4 Snubbie for EDC
The original Model 15-4 before the work done at Sand Burr Gun Ranch. 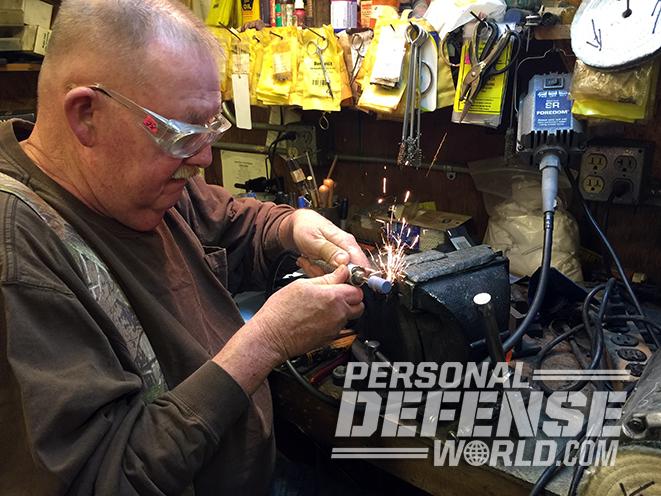 3 of 7
Custom Classic: Rebuilding a S&W Model 15-4 Snubbie for EDC
Denny works his magic at his bench. 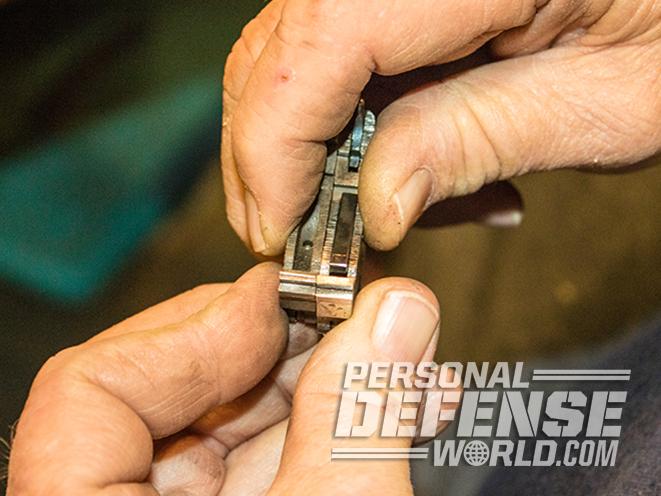 4 of 7
Custom Classic: Rebuilding a S&W Model 15-4 Snubbie for EDC
Note the differences between the standard hammer at left and Sand-Burr-modified DAO hammer at right. 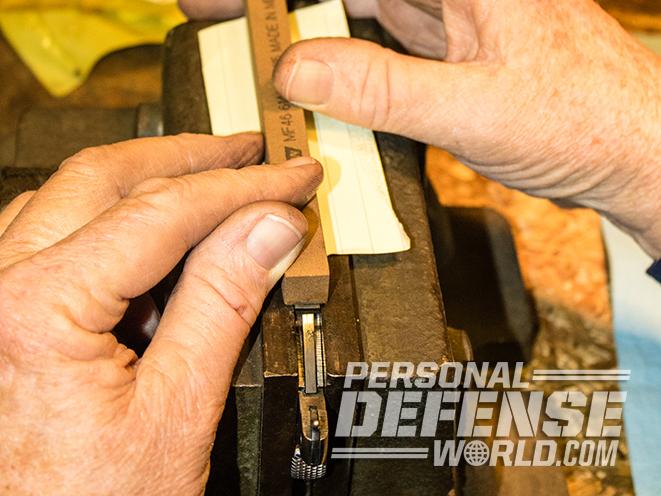 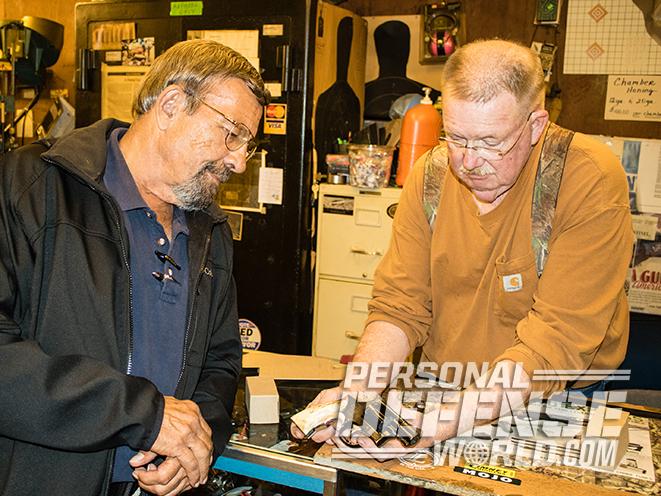 6 of 7
Custom Classic: Rebuilding a S&W Model 15-4 Snubbie for EDC
Reichard shows off the refurbished revolver, which has Eagle Sambar Stag grips, a DAO hammer, a Tyler T-grip and more. 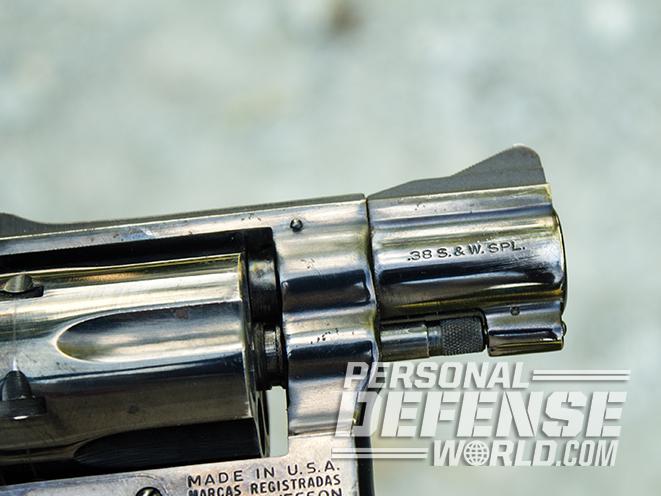 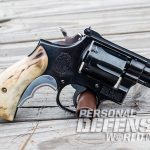 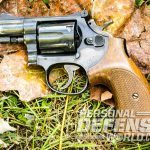 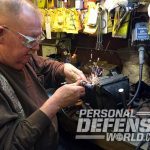 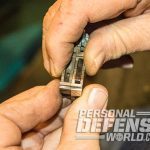 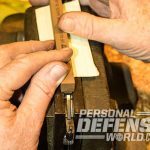 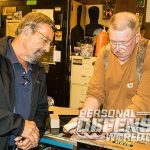 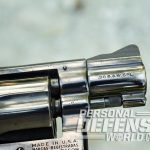 It was one of those moments we firearms enthusiasts have in gun shops where you spot a gun in the showcase and you’re like a kid making eye contact with one particular puppy at the kennel. The firearm catches your eye, and the next thing you know, you get a strong sense that it wants to come home with you.

In this case, the venue was the Pro Arms Gun Shop in Live Oak, Florida. The gun was a Smith & Wesson K-Frame fitted with worn, brown Herrett’s stocks. I asked to see it. The revolver was a Model 15-4 in .38 Special, its blued finish distinctly holster-worn and freckled with tiny rust spots. A very cursory function check showed it to be in decent shape with a smooth double-action pull, and a quick glance at the price tag showed a very favorable price. Overall, I was reminded of Colonel Jeff Cooper’s comment about guns that were “carried much but shot seldom.” And this one had a 2-inch barrel, a rarity for the gun Smith & Wesson dubbed the “Combat Masterpiece.”

After a little haggling, I reached for my credit card. I got home, where my significant other and I were desperately packing for a three-week training tour, and showed it to her. She said, “What are you going to do with that?”

Sand Burr Gun Ranch was founded in 1996 by Dennis O. Reichard, known to his friends as Denny or D.O. The facility went full-time in June of 2004, with his daughter Ashley as its manager. Denny went into it full-time himself when he retired in 2010 after 36 years in law enforcement. The ranch houses a great little old-fashioned gun shop, Denny’s workshop and a shooting park that has hosted classes by John and Vicki Farnam, Mike Pannone, Henk Iverson, Frank Sharpe, Pat MacNamara, yours truly and more. Denny and Sand Burr’s own teaching crew do their own regular classes there as well, focusing on revolvers and compact semi-autos. It was also my first stop on the training tour.

Denny works on more S&W Model 686s than anything else these days. J-Frames are second in popularity among customers, with N-Frames coming in third. Denny gets a lot of K-Frame Model 19s, too. He works on about 350 to 400 guns a year. As you might have gathered, he confines his work to double-action Smith & Wesson revolvers.

While he can provide you with fancy cosmetic stuff, Denny focuses on action work that enhances the revolver’s functioning. I’ve owned several Reichard-tuned S&Ws over the years, and have been delighted with all of them.

He had previously honed the action on a 4-inch-barreled Model 15 of mine, and in 2010 I used that gun to win First Master in the Stock Service Revolver division at the East Coast IDPA National Championships, coming in second overall to Craig Buckland. Craig was the national champion at the time, and just a short time out from becoming world champion, and I don’t think I could have beaten him with Excalibur in gun form. Suffice it to say that I was happy with Denny’s work on that Model 15.

When I brought the Model 15-4 to Denny, his much more practiced eye spotted some more issues I had missed. He found the gun had slight timing issues on two chambers, and a little cylinder shake. I had stupidly neglected to check the barrel/cylinder gap, and the cylinder was touching the forcing cone. The forcing cone was not flush. According to Denny, “The forcing cone had concaved areas top and bottom, which is common. They used to cut them on a broach, and when the broach was worn it would no longer cut flat.”

Then he went to work on it. “I did my deluxe action, where I line everything up, smooth sharp edges and radius the edges on the inside of the hammer, trigger and rebound slide,” Denny said. “Then I polished those parts to a mirror surface on the contact surfaces. That takes more time, which is why I charge more. Then I used the yoke stretcher to stretch the yoke to the proper length, and tightened it up. I measured the hand to ascertain its width, and put one in that was a thousandth larger, and fitted that, correcting the timing. I used my tool with a brass barrel liner to cut the forcing cone flat. I removed the trigger serrations, and radiused and polished the trigger surface. The same was done with the hammer.”

Reichard continued, “I weighed the mainspring and rebound spring, which means cutting away and bending. I had the privilege of doing Smith & Wesson’s basic and advanced armorer’s courses under the great John Contro, who used to say, ‘God dammit, we don’t cut and bend—we ‘weigh’ it!’ I put it back together and checked everything, test-fired 12 rounds, and fitted Eagle Sambar Stag grips.”

I asked Denny to make the Model 15-4 a double-action-only (DAO) revolver. Why? Because, going back more than 30 years, I’ve been involved as an expert witness for the defense in cases where a cop or citizen defending himself either cocked the hammer and, under stress, unintentionally discharged the revolver or was falsely accused of having done so. Back in the early 1970s, the LAPD became the first major department to render all of its service revolvers DAOs to keep either of those things from happening. The NYPD, Miami Police Department and Montreal Police Department followed suit, among others. In self-defense applications, you want a controlled DA pull anyway.

Denny’s approach to this is worth noting. He explained, “We set up the hammer in the mill vise that Ray Saltzman showed me how to use for this. We used an India stone and placed it on a double thickness of paper atop the mill vise with the stone traveling over the single-action sear portion of the hammer notch. We simply moved it back and forth until the notch was gone, and that area was smooth with the rest of the hammer surface.”

The rationale behind this particular method? As Denny put it, “This makes a very clean, precise cut removing only a small amount of metal with each pass, and adds to the polished effect.”

While Denny will often dehorn the hammer by removing the hammer spur when he turns a revolver into a DAO model, I asked him to leave the spur intact so it would secure under the safety strap of some of my revolver holsters. Denny obliged, polishing the hammer for maximum action smoothness and taking the sharp edges off.

Why A K-Frame Snubbie?

When I was young, I thought a K-Frame revolver with a 2-inch barrel, a square butt and target sights was just clueless. Too big to hide in a pants pocket, top-heavy in a holster, a short ejector rod that might slow your reloads down—what was the point?

The years taught me otherwise. K-Frame M&Ps with fixed sights and 2-inch barrels have been around for a very long time. True, adjustable sights have long been seen as the province of the competition handgun, which is why the 2-inch-barreled Model 15 always struck me as a sawed-off target revolver. However, going back to the turn of the 20th century, S&W offered the adjustable-sighted M&P Target, normally a 6-inch-barreled gun, with a seldom-if-ever-catalogued 4-inch barrel. In 1949, a 4-inch-barreled version of the K-38 Masterpiece target revolver officially joined the line and was named the “Combat Masterpiece.”

With a sleek ramped Baughman front sight, the Combat Masterpiece was a strikingly graceful revolver and an instant hit, soon becoming the standard service weapon of the LAPD, the Los Angeles County Sheriff’s Department (LASD) and many other law enforcement agencies. Around 1957, when S&W went to numeric model designations, the Combat Masterpiece became the Model 15 in .38 Special. The .22 LR training version became the Model 18. The 2-inch barrel became an option in the early 1960s. Still later, the company introduced a stainless version—which I’ve personally seen only with a 4-inch barrel—designated the Model 67.

So, why a 2-inch-barreled revolver with adjustable sights? The K-Frame allows you to get a full-hand grip.

The adjustable sights do give a slightly better sight picture, and they make it easier for you to zero the gun for your preferred ammo. If you’re at a backup gun-type match where a 2-inch barrel is the maximum length allowed, this snubbie Model 15-4 is simply the ideal piece of equipment if you’re going for the win. And if there were a national championship of handgun retention (i.e., defeating disarming attempts), this short Model 15-4 would be high on the list of guns I’d consider using. The full-sized grip frame gives the user a very solid hold, and the very short barrel affords much less leverage to the thug who grabs your gun and tries to wrench it out of your hand.

I ordered the deluxe action job ($120). For more ergonomic contact between my finger and trigger, Denny radiused the trigger ($60). The polished hammer was $34, removing the single-action cocking notch was $50, and adding the overized cylinder hand was $28. Denny chamfered and honed the chambers ($60) for faster reloading.

As mentioned, Denny installed a pair of Eagle Sambar Stag grips for the stake of style as well as a silvery Tyler T-grip. Now the gun is as concealable as possible for a square-butt K-Frame, yet it retains its old-school look. The cost of grips like this today is sort of like lobster in a fine restaurant: price on request, or POR. Availability issues mean you’ll be paying in the hundreds, and prices can vary quickly and wildly. I considered having the gun refinished with IonBond but decided the salty look of the Model 15-4’s worn bluing gave the old gun character, and left it as is for now.

The S&W revolver now has a 9-pound DAO trigger that rolls under your finger like you’re caressing a piece of crystal. It will easily shoot a 100- percent qualification score. And it’s got plenty of old-school style! 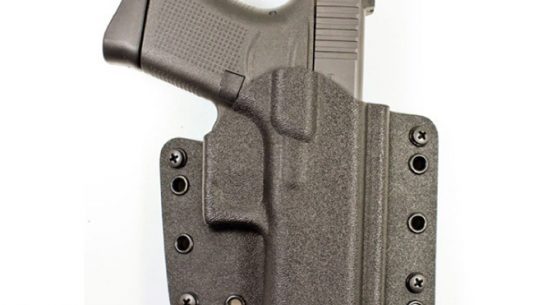 DeSantis has announced that its Raptor and SL Raptor holsters now fit the Glock...