The brand-new Springfield XDE pistol has finally arrived. We were given a sneak preview of it in mid-April at a new product launch in Las Vegas.

We were sworn to secrecy before we even arrived. Springfield Armory had invited 20 some writers, bloggers and Internet gun gurus to see the company’s latest product. We had dinner the night before the event, and we each had a guess as to what the new gun might be. One writer speculated that it would be an XD chambered for the .380 ACP while a couple others thought it might be a .308 Winchester version of the new Saint semi-auto rifle.

I spotted Rob Leatham, an old friend and a professional shooter for Springfield Armory on top of being one of its oldest employees. Leatham holds more championships and world titles in multiple shooting disciplines than most people have socks. After saying hello, I casually asked him what we’d be shooting tomorrow. His only reply: “Something fun.”

The next morning found us at the Clark County Shooting Facility outside of Las Vegas. After a quick breakfast, we were introduced to Dennis Reese, the CEO of Springfield Armory, and Steve McElvain, the company’s new president. We still didn’t know what the gun was going to be. We were all looking for clues, and the anxiety was killing us.

Then the PowerPoint presentation began with a picture of a hammer and the words, “There are some tools so basic you can’t imagine being without them. But even essential tools can be refined and improved.”

The next screen said, “That’s the principle behind the new XDE: the best elements of the world-renowned XD series, condensed into a pistol so intuitive, comfortable and accurate, you can’t imagine being without it.” 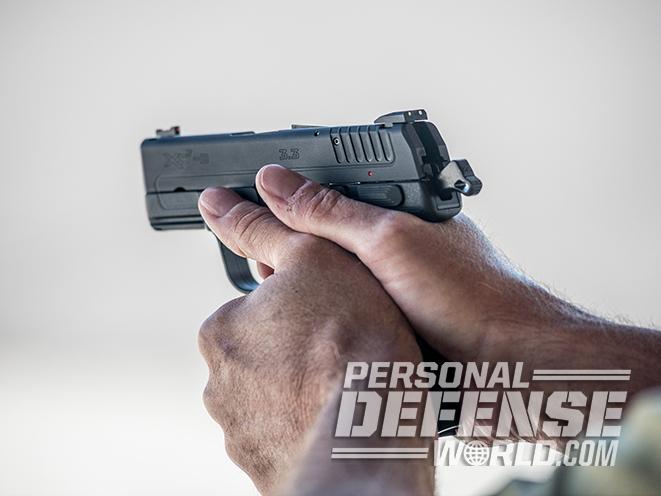 Finally, we saw an image of the brand-new Springfield XDE pistol. It looked like an XD-S, but with a long double-action trigger and an external hammer. The presentation continued, “The XDE sculpts unmatched ‘Point and Shoot’ ergonomics into a sleek frame just an inch wide for a hand and holster fit so satisfying you’ll take it everywhere. The Low-Effort Slide practically racks itself, so handling is a pleasure. The exposed hammer clearly shows the gun’s mode, and the DA/SA trigger shows respect for your shooting style.”

Springfield personnel began passing around the new XDE for us to inspect while the presentation continued. While I looked at the gun, I was immediately impressed with just how slim it is—just an inch thick! Its ergonomics were great for instinctive pointing, and Springfield’s GripZone provides secure texturing. It also has a high beavertail and an undercut triggerguard to put the shooter’s hand as close to the bore axis as possible.

The double-action trigger pull was heavy, about 12 pounds, but smooth. The single-action pull was much better at about 4.5 pounds. I noted the bilateral manual safety was conveniently located in the Browning-inspired location. This allows the gun to be carried hammer down or cocked with the manual safety applied. Depressing the thumb safety past its “off” position decocks the hammer. The magazine release is also ambidextrous and can be activated from either side of the frame.

Springfield is going to ship the gun with two magazines. The eight-round, flush-fit magazine will have two floorplates: One low profile for concealability and another with a grip X-Tension. The extended nine-round magazine also has the grip X-Tension so shooters can get a full grip on the subcompact.

One of the more intriguing features of the XDE is the Low-Effort Slide (LES), which Springfield claims requires 27-percent less racking effort. This feature alone will make it desirable for those who find it difficult to manually chamber a round with other autoloaders.

Finally, we got a chance to hit the range. Want to know how the Springfield XDE performed? For a full test and evaluation, make sure you keep your eyes peeled for the next issue of “Combat Handguns.”

For more information on the Springfield XDE, please visit Springfield-Armory.com.