by Jay Pinsky
in Guns, Handguns
0

I also absolutely love to hunt. I hunt just about anything and everything I can, mostly in my home state of Virginia. I like to hunt with a rifle and a bow. I tend to do more bowhunting these days and enjoy the challenge of getting as close as I can, and then one more yard, before I shoot. This philosophy would serve me well after I decided to learn to hunt whitetails with .45 ACP pistols. 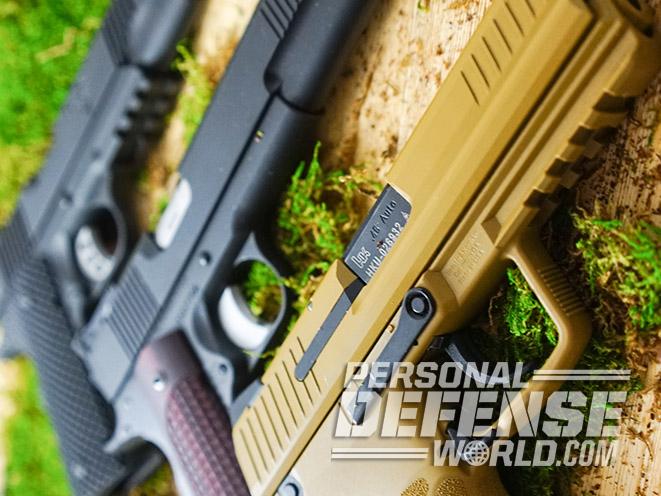 Within a nanosecond of this idea, I did a reality check by reaching out to a few industry experts. Neal Emery at Hornady was the first person I talked to, and he had a lot to say. For hunting deer, Emery recommended I use the caffeinated stuff, or +P loads, that Hornady developed.

What is +P ammunition? It’s ammunition that has been loaded to pressures above industry standards but below the redline of SAAMI “proof” pressures. In short, +P loads give you more velocity. For example, the fastest .45 ACP load I shot was Hornady’s 220-grain Critical Duty FlexLock +P, which screamed out of my 6.3-inch-barreled Dan Wesson Bruin at a chart-topping 1,130 fps, which is 158 fps faster at the muzzle than Hornady’s standard 200-grain XTP load, which of course is a lighter bullet.

Emery suggested the loads with more speed to help me get better penetration with such a big bullet, stating that the lower velocities of a round like the .45 ACP, with such a big frontal area, limit penetration even before accounting for bullet expansion. His final words of advice: “I wouldn’t hesitate to use [the .45 ACP], but I definitely wouldn’t stretch the shots out very far.”

On that note, I decided to set a personal limit of 25 yards regardless of the gun, ammunition or my skillset come hunting season on whitetails here in Virginia. I’m sure many of you will say that’s still too far, and still others will boast about clean kills at double or even triple that range. Virginia’s Department of Game and Inland Fisheries, the good folks who set and enforce our local hunting regulations, have their own standards for handgun hunting: “Pistols and revolvers are lawful for deer and bear hunting only in those counties where hunting deer and bear with rifles is lawful. Cartridges used must be .23 caliber or larger and have a manufacturer’s rating of 350 foot-pounds muzzle energy or more.”

Based on the tested and verified velocities of the best hunting loads in all three of the guns I tested, I was well within the legal requirements even out to 100 yards, with the best performance coming from the Hornady 220-grain Critical Duty FlexLock +P rounds out of the Dan Wesson Bruin, providing 624 foot-pounds of energy (fpe) at the muzzle and still arriving at 100 yards with 475 fpe at 986 fps. The least powerful performance came from the shortest barrel in the HK45, which shot the Hornady 230-grain XTP +P rounds at 950 fps and 461 fpe at the muzzle and 871 fps and 388 fpe at 100 yards. While other hunting loads were faster, the Hornady 230-grain XTP +P grouped very well from the HK45 at 0.59 inches at 25 yards, and I’ll choose accuracy over speed whenever I can. Still, 25 yards was the rule for me. Not only did I keep this promise, but it changed the way I think about hunting overall. But more on that later.

You’ll notice that the first thing I talked about were my bullet choices. Why? Because when you’re talking about hunting with a .45 ACP—and really any hunt with any caliber—what bullet you choose and how well you place it matters far more than the manufacturer’s name on the boom stick you have in your hand. What gun you choose does matter, though. And I’m all about a handgun’s fit and feel for hunting.

The first handgun I decided to use was a superbly built 1911—DoubleStar’s C2G. The company had dazzled me with a silky-smooth AR-15 a few years back, so when I found out DoubleStar made a .45 ACP, I knew I wouldn’t be disappointed. And I wasn’t, as the full-sized 1911 instantly became my carry gun. It’s what inspired this whole story.

The DoubleStar C2G sports a match-grade, stainless steel, 5-inch barrel, Novak three-dot sights, VZ Gunner grips, a forged steel frame, a Picatinny rail and an eight-round magazine. My pistol’s trigger broke reliably at 4.5 pounds according to my RCBS trigger pull gauge, and the gun has never failed to cycle anything I’ve fed it. The single-action pistol is black and coated in what DoubleStar calls its Dragon Hyde DLC finish. I’ve put thousands of rounds through this gun, and it still looks like new. I’ve drawn and holstered it hundreds of times, banged it against brush, trees and dirt and hunted with it in the rain with absolutely no problems. The best part of the pistol for me—and the part of the gun I remember the most—are the sharp, aggressive VZ Gunner grips. They really keep my hands glued to the pistol and on target, whether I’m shooting light duty rounds or +P loads. The gun’s clean shape, solid fit and reliable accuracy make me a very confident shooter.

The next pistol I tested was the Dan Wesson Bruin, which sports a 6.3-inch barrel. The longer barrel gives shooters a better sight radius and adds a little pep to your ammunition. That 1.3-inch difference in barrel length translated to higher velocities over the DoubleStar C2G. For example, the 220-grain Hornady +P load clocked in at 1,062 fps from the C2G and a whopping 1,130 fps on average from the Bruin. Remember, Neal Emery recommended the most speed possible for the .45 ACP, and this is where the Dan Wesson Bruin shines.

The Bruin holds eight rounds in its magazine just like the DoubleStar, but its grips are made of G10, and it has tritium sights, a forged stainless steel body and a tough “Duty” finish. The trigger on my test model was just as crisp and equal to the DoubleStar in pull weight at 4.5 pounds, but it shot the tightest groups on average out of all three handguns. The best group came with the Black Hills 230-grain FMJs, measuring 0.57 inches for three shots at 25 yards with an average velocity of 930 fps. Hornady’s 220-grain +P load clustered three shots into 0.94 inches at an average of 1,130 fps.

In all, the Bruin is a silky-smooth handgun designed to give hunters the maximum benefits a 1911 platform will allow with a long, slick barrel, clear sights and a trigger crisper than Kentucky Fried Chicken. That extra inch of barrel matters in more ways than one, though, as its balance, holster fit and pointability differ considerably from what most folks know a 1911 to be, so make sure you’re ready for it.

Last but not least, I added my favorite polymer-framed pistol to the mix with Heckler & Koch’s HK45. While both the DoubleStar and Dan Wesson 1911s are well-machined works of art, the HK45 is the gun I carry the most, shoot the most and beat on the most. Why? It fits my hands like a pair of Isotoner gloves and shoots softer than the other two guns, although they weigh more. The pistol’s slide, decocker, exposed hammer, gorgeously bright sights and wide, easy-to-feed magazine well all pull me to this gun time and time again.

The HK45 wasn’t the most accurate overall, but it was accurate enough, and it shot the tightest group with a hunting load of all the guns, which surprised me. With the Hornady 230-grain XTP +P ammo, the HK45 created a best three-shot group measuring 0.6 inches at 25 yards with an average velocity of 950 fps. It wasn’t the fastest, but it was fast enough. This gun fed and shot everything I could find, and it worked well covered in mud, soaking wet, above freezing, below it. As long as I fired the gun in single action, the trigger was just fine with its 5.25-pound pull.

For two months, I rotated each of the three guns through hunting opportunities to allow Lady Luck to choose which gun landed my first handgun harvest. I got hold-your-breath close during the rut when I played hide-and-go-seek with a mature buck. I grunted the deer to within 50 yards and even drew the DoubleStar 1911, but that old, wise buck kept circling me until I flinched, making a mistake on wind and getting busted before he met my requirement of being within 25 yards. It was still a great hunt. A few weeks later, I pulled my HK45 out on a doe who never let me see her vitals despite being only 10 yards away in the woods.

Hunting deer with a handgun where you set a limit to 25 yards or less means you have to hone your stealth as much as your shot. I’m still working on both, so the only happy ending for this story is for the deer—for now. The deadline for this story came before the end of deer season here in Virginia, so I am hoping to add an author’s note about which gun got me my first deer with a handgun. If not, there’s always next year.