A gunfight between an armed carjacker and an armed citizen at a gas station in Elmwood Park, Ill. ended with the shooting death of the suspect, and the whole thing was captured on video which has just been released to the public. Check out the footage above.

According to the Chicago Tribune, 43-year-old Ronald Morales had just exited the BP gas station convenience store at around 4:52 p.m. on Saturday, April 8 when he made eye contact with a man who was pumping gas into his vehicle. For some reason, this prompted him to walk over to his car and get his gun.

The footage clearly shows Morales—gun drawn—walking back toward the man, who by this point realized Morales was armed and had gotten back in his vehicle along with three other people.

Morales can then be seen yanking open the passenger side door and shutting it as the driver starts getting out of the car armed with a gun of his own. A shootout ensues over the top of the car, with each side firing multiple rounds. The whole thing takes place in a matter of seconds. In the end, Morales is shown running off while the driver speeds away.

Morales was hit multiple times. Police arrived at the scene and transported him to Gottlieb Memorial Hospital, where he was pronounced dead later that day.

The armed citizen, meanwhile, was uninjured. He and the three other people in his car gave video-recorded police statements of what went down that day, which were corroborated by the surveillance footage you see above. After an investigation by Elmwood Police and the Cook County State’s Attorney’s Office, the man has been cleared of any wrongdoing. There’s no mention of it in any articles, but based on the outcome, we can surmise that the gun he used was legally-owned.

“This was an unfortunate and isolated incident,” Elmwood Park Police Chief Frank Fagiano said. “But in the end, it was determined that the individual acted in self-defense. We are happy that no innocent citizens were injured.” 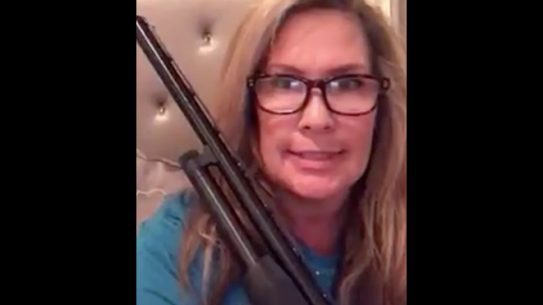 Texas mother Maria Luce took to Facebook to issue a stern warning to an...