Colt Cobra: The Legendary Revolver Strikes Back in .38 Special +P

The Cobra builds on Colt’s long history of concealable double-action revolvers that goes back some 90 years. This new .38 Special +P variant arrives in stainless steel.

The last decade of Colt’s history has been one of slowly regaining the place in the market that was once rightfully its own. While this may sound a bit bold, note that between the AR-15, Model 1911 and Model 1873 Single Action Army, there are very few major firearms manufacturers that do not make at least one clone of a Colt product. Several make more than one, and at least one makes all three. Colt’s resurgence has begun with the dramatically increased quality of its Model 1911 pistols and has included the increased availability of Colt AR-platform rifles. To this, add the reintroduction of the Colt Cobra double-action revolver. 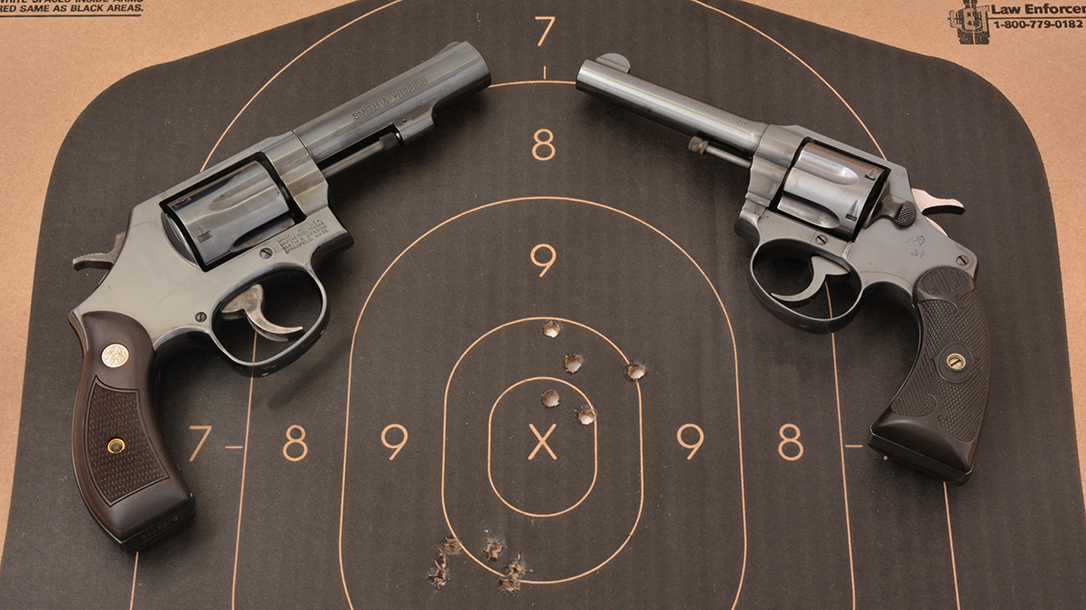 Update as of Jan. 2, 2020 — Colt just reintroduced an updated version of the Colt Python. Now, back to your regularly scheduled programming.

The stainless steel Colt Cobra is more than just a reinterpretation of the classic Detective Special snub-nose, though. It’s an entirely new pistol with its own scalable architecture that we can expect to see in other revolver models yet to be introduced. But first, a few words on how we got here.

The snub-nose Colt revolver properly begins with longtime Colt employee John Fitzgerald, who was renowned for taking Colt’s bulky New Service .45 revolvers and lopping off their 5-inch barrels to around 2 inches, along with their hammer spurs and triggerguards, to create stout, concealable defensive pistols known as “Fitz Specials.”

Sometime around 1920 or 1922, he turned his attention to the smaller Police Positive Special, a version of the Colt Police Positive lengthened to take the longer .38 Special cartridge.

The snub-nose Detective Special (which retained both its spur hammer and triggerguard), was introduced in 1926. It stayed in production in its original form for nearly 50 years, to the tune of some 400,000 guns. Later versions included the lightweight Agent and Cobra, the latter of which fit into Colt’s “Snake” series, including the Anaconda, Boa, Diamondback, King Cobra and Python.

In addition to its popularity for police and civilian use—not to mention a fair number of Humphrey Bogart movies—the U.S. Army adopted the Detective Special. Primarily issued to CID agents according to former infantry officer Timothy Mullin, who included it in his book “100 Greatest Combat Pistols,” contemporary military manuals cover things such as the qualification course for the Detective Special, which extended to 50 yards, and even the tracer variants authorized for use in it!

This may seem a bit ambitious in our world of mini semi-autos. The wheelgun, however, still has an edge when it comes to simplicity of use and reliability, especially in close quarters.

Viewed from a combative approach, shootings often occur at contact distances, something you may have little or no control over. While a contact shot creates a truly devastating wound, it may also stop a semi-auto from firing at all, and again, the shooting options available to you are largely up to an attacker, not you. Not to mention that a revolver can be fired from inside a pocket. A semi-auto can typically only do that once.

Envisioned as a pragmatic defensive pistol, the current Colt Cobra has an easy-to-replace front sight—a red fiber-optic unit comes standard, but other options are forthcoming—and is currently available only in .38 Special +P.

While a revolver chambered for the .38 Special may seem unusual in world where we’re used to magnum snubbies (Colt offered the Detective Special in .357 as the Magnum Carry nearly 20 years ago), those guns have serious drawbacks for self-defense.

It’s not a matter of velocity loss, which is a mere 100 fps or so between 4- and 2-inch barrels. Rather, the blast, flash and recoil of full-power .357 Magnums, which are especially savage with a lightweight frame, are very difficult to manage for most shooters, making crucial follow-up shots slow at best. The combination of a steel frame and .38 Special +P chambering, however, makes the Cobra much easier to handle than the lightweight magnums, which feel a lot like getting hit in the hand with an axe handle.

In addition to focusing on the handling qualities, Colt also sought to reduce the amount of hand-fitting required to build the guns; it was long a source of frustration for those who have tried to work on Colt double-action/single-action (DA/SA) revolvers. Currently, the hand is the only part of the mechanism that has to be fitted by hand; that will soon be supplanted by machine fitting.

The triggerguard has also been made substantially larger and given a distinctive profile more square than the earlier guns, which allows more room for those wearing gloves and for the trigger to reset. And you shouldn’t expect the new Cobra to fit in holsters designed for the older model; by the time this hits print, however, both Blade-Tech and Galco should have holsters available.

The Colt Cobra does maintain the six-shot capacity that has long been a Colt trademark, giving it one extra round over its five-shot competitors while still keeping the cylinder only 0.1 inches larger in diameter. Yes, speedloaders for the earlier guns will fit.

Critics of the triggers of classic Colt DA/SA revolvers say they tend to “stack” near the end of their strokes. Even Geoffrey Boothroyd, after whom Ian Fleming patterned Bond’s Q, complained about it in his 1970 book “The Handgun.”

The tightly curved trigger of the original guns could also be quite unpleasant on the trigger finger. Colt has gone to great lengths to remedy this on the Cobra. It revamped the trigger system to use a linear leaf spring and a much straighter trigger (which has also been moved rearward, along with the entire grip frame) to increase the finger’s leverage on the trigger system. The end result is a different trigger than what I’m used to feeling on DA/SA revolver. It’s also far better than the typical Colt trigger, dispensing entirely with the traditional stacking.

The stacking itself is not entirely bad, as it lets an experienced shooter “stage” the trigger for precise shots, something that may cause other shooters to jerk the trigger. For defensive work, though, smoother is better.

Blast From The Past

For me, the Colt Cobra revolver represents a certain symmetry. My first revolver was a Detective Special, and customizing that gun became the first article I wrote for this magazine. I’ve never met Harry Kane, then-editor of “Combat Handguns,” in person, but he very kindly allowed me an opportunity by accepting and publishing that piece. That was 17 years and a couple hundred articles ago. I wrote for him, off and on, until he retired several years ago.

That pistol, which I still own, had the front sight modified with a tritium insert. It also had both the face of the trigger and the action smoothed to make the trigger pull more manageable. These are readily accessible with the new Colt Cobra, but on that gun they represent permanent changes, ones I might not have made had I realized the significance of its military markings. The ex-Army .38 proved surprisingly accurate. It posted 7-yard groups around an inch and a handheld 25-yard group of 3.5 inches; this made those 50-yard qualifications suddenly seem a lot more realistic.

I had the chance to shoot the Colt Cobra this past November while at a press event at Gunsite; it likewise proved quite capable. Although I only shot the new Cobra at 7 yards, I spent quite a bit of time with it. I shot it right-handed, left-handed and with both hands from a modified Weaver stance.

If anything, it was more accurate than my early gun—so much so that when we got tired of shooting improbably small groups with it, we just started shooting the staples holding the target up.

To the folks at Colt who worked so hard to improve on the past instead of being content to repeat it, well done. And to Harry Kane—thank you. Without you, I wouldn’t have been there at Gunsite with a Colt in my hand; and this article, like so many others, never would have been written. I’d also like to thank Dr. Chris Coulter, Gary Paul Johnston and Nathan Tippins. MSRP comes in a $699. For even more info, visit colt.com.