The mighty .357 Magnum has been a thing of legend since its introduction in 1935. Able to stop cars with a single round, drop game at 1,000 yards and leave criminals shaking in their boots, the .357 Magnum is surrounded by mythology. Often referred to as the king of the “one-shot stop,” its reputation has permeated the gun industry for decades.

Much like the unstoppable .45 ACP and .44 Magnum, it’s true value is often overshadowed by the hype. The truth is, the .357 Magnum can be an excellent self-defense and hunting round, and, in the right handgun, it’s nowhere near as punishing to shoot as reputed. Sure, featherweight revolvers loaded with heavy, high-power loads are punishing. But steel versions with the same load are not unpleasant, especially with longer barrels. It’s all about using the right tool for the job, and that is critical with this caliber. 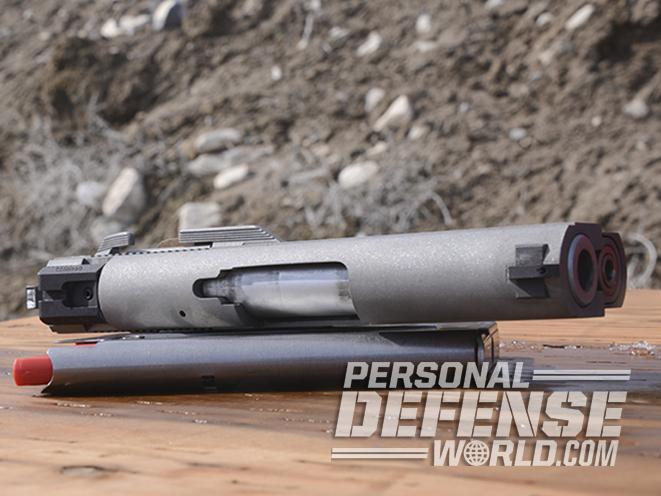 The value and effectiveness of the .357 Magnum has resulted in numerous attempts to replicate it for use in a semi-automatic. Most attempts have been somewhat less than successful, and those that are tend to be rather large and heavy. The .357 Magnum’s case is long by comparison, so it’s difficult to make it work in most recoil-operated pistols. While the Magnum Research Desert Eagle in this chambering has garnered some attention, it weighs about 4.5 pounds thanks to its gas-operated rotating bolt—hardly viable for daily carry.

AutoMag even experimented with a .357 AutoMag Pistol (AMP) version that was a necked-down .44 AMP case using a .357 Magnum bullet. The ballistics were impressive, but the gun was 11.5 inches long and weighed in at just under 4 pounds. It never went beyond the prototype stage.

Only Coonan Inc. has provided .357 Magnum semi-autos that are viable for self-defense and everyday carry. Patterned off the 1911, the Coonan designs use pivoting triggers, link-less barrels and external extractors. These guns also use slightly large magazines. Originally a full-sized, 5-inch-barreled gun, the new Coonan Compact provides a powerful pistol in a size that can be carried every day.

The slide and frame of the Coonan Compact are both CNC-machined from 17-4 pH stainless steel. The slide houses a 4-inch, carbon-steel, link-less barrel that has been chrome plated. Also, unlike the full-sized pistols, the Coonan Compact is designed to run .357 Magnum rounds only using a 24-pound recoil spring along with the stainless steel guide rod within the full-length dust cover.

The external extractor works in conjunction with a longer ejection port shaped to accommodate the longer .357 Magnum rounds. On top of the slide, my test pistol came with snag-free, three-dot sights, though tritium models are available from Coonan.

The grip frame has been bobbed for easier concealment, yet it offers a full grip. The grip portion itself is still longer front to back than a standard .45 ACP 1911’s. The smooth frontstrap is cut high, and the triggerguard is squared to offer plenty of room for shooters wearing gloves.

Coonan has adorned this stainless steel version with smooth walnut grip panels that look really nice. An extended grip safety is mated to the smooth mainspring housing (checkered versions are available), and the Coonan Compact features a single-sided thumb safety. The slide release is extended for easy operation.

While much of the internals are compatible with .45 ACP 1911s, the Coonan uses a pivoting trigger. Most modern pistols, including the Browning Hi-Power, use similar designs. My test pistol’s trigger pull weighed approximately 4.31 pounds.

Coonan lists several companies that make custom leather holsters for this pistol. Blade-Tech lists a few in Kydex. As far as custom pistols go, there is quite the selection here.

I have an assortment of 1911 holsters, and I found one that worked with the Compact: a Sourdough Pancake rig from Simply Rugged Holsters. It worked nicely despite being a little tight. I didn’t have any magazine pouches for the gun, so I carried spare magazines in my pocket, which isn’t uncommon for me.

I received a few extra magazines for the testing so I could practice reloading. After firing 100 rounds of Hornady’s 125-grain Critical Defense FTX ammo to ensure it worked properly, I loaded the Coonan Compact and carried it for a few weeks. Simply Rugged’s Sourdough Pancake holster can be carried either IWB or OWB, so I tried both. I carry a 1911 most of the time, and the Coonan carried like many of my Commander-sized pistols. It was comfortable, concealed well and easy to draw. It turned out to be an excellent carry pistol with a clean and predictable trigger.

I know the recoil of the 10mm and .357 Magnum all too well, and that’s partially why I typically carry 9mms today. So I fired my first few rounds through the Compact with some care. But after the first magazine, I thought, “What happened to the recoil?”

Sig Sauer’s 125-grain FMJs—listed at 1,450 fps by the company—chronographed at 1,401 fps out of this pistol, and they were an absolute joy to shoot. Every 125-grain load was the same: controllable, accurate and anything but punishing. It really was a ton of fun to shoot this gun time and time again. The recoil was a bit more noticeable with the hot 158-grain loads, but it wasn’t anything out of the ordinary. The Compact actually makes for a very controllable and accurate .357 Magnum with a 4-inch barrel.

My hands are pretty big—so much so that even my 1911s with full grips are a bit small. Here the extended length of the grip allowed me to wrap both of my hands around this pistol, providing excellent control. In fact, the gun felt as if it was built for me, allowing my trigger finger to naturally fall into the right spot. I don’t think the gun will fit this way for everyone, but I loved it. Even the most powerful loads were comfortable to shoot, which allowed for some respectable rapid-fire groups at 7 yards. At 15 yards, all of my rapid-fire groups were about the size of a fist—perfect for a carry pistol.

The accuracy was excellent, with the Sig Sauer load producing my best 25-yard group of the day at 1.5 inches. For this portion of the evaluation, I fired five-shot groups over the hood of my truck using a Wiebad bag as a rest. Every group was near 2 inches, even with the heavier loads. Moving back to 50 yards, the Compact was still very flat-shooting using the Sig load on an IPSC silhouette steel target. My best five-shot group at 50 yards was only 4 inches. At 100 yards, I was able to get five shots out of seven on the center-mass of a steel target. No, that’s not something you’ll need to do in the real world, but it’s not a bad thing to have in your pocket.

The pivoting trigger resets like a typical 1911’s. It felt excellent, like a properly tuned Hi-Power’s. It facilitated rapid fire at close range as well as controlled accuracy at distance.

While the thumb safety is just like a 1911’s, the extended slide release did provide an issue for me initially. My tendency is to shoot with what is considered a standard thumbs-forward grip—something I have been doing for over three decades now. My support-side thump would occasionally ride the slide release during rapid fire, preventing the slide from locking open after the last round. Once I found the right spot, the issue stopped, but it might be something to consider for those of us with big hands and thick fingers. Conversely, it was possible for me to release the magazine and slide with my strong hand without shifting the pistol, so once I was dialed in, the gun was very fast.

I’ve preferred checkering for years, so I assumed the smooth front- and backstraps would create an issue at first. But I was wrong, maybe because the grip fit so well. You can get a checkered mainspring housing, but the gun never felt loose in my hand, and the grip helped in the concealment department. 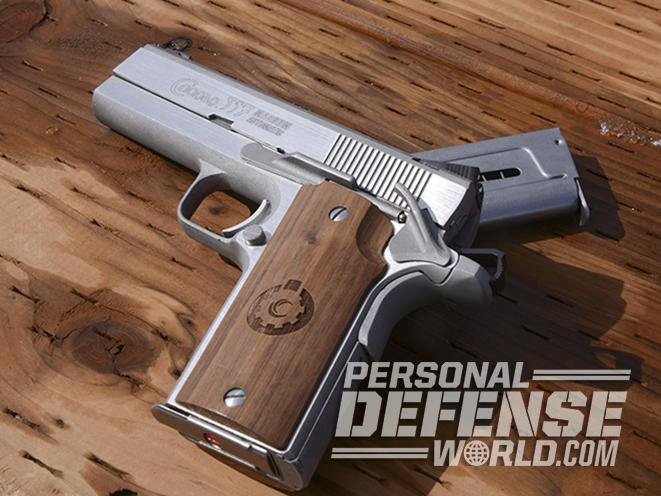 Most of my time these days is spent testing rifles, so it was nice to venture back into the handgun world. Having carried concealed since the mid-1980s, usability is always at the forefront of my mind when I test pistols, and the Coonan Compact is all that and more. My first duty revolver was a .357 Magnum and my Smith & Wesson Model 627 is often close at hand, so it’s a caliber I believe in and have experience with. This just adds to my choices while providing a pistol more suited for concealed carry. The fit and finish are great—what you’d expect for a 1911 in this price range.

This is one of those pistols I had a hell of a time putting down. In fact, I depleted a large portion of my .357 Magnum stock. I also chose it for concealed carry a few times. All I need is a holster and magazine pouch for it. If you are looking for something a bit different in a venerable concealed-carry caliber, make sure you take a close look at the Coonan Compact. It might just be the ticket.