A video of an armed robbery at a Jimmy John’s in Kansas City, Missouri is currently making the rounds, and we couldn’t help but notice a couple of details: first, the clerk behind the counter remained amazingly calm throughout the entire ordeal, and second, the bad guy isn’t exactly competent when it comes to handling firearms.

At the beginning of the intense surveillance video, the clerk is busy working when a man in a light blue hoodie and a hat walks up and places an order. All appears normal, when suddenly the man pulls out a handgun, points it inches from the clerk’s face and starts demanding money.

The clerk appears completely unfazed, opening the register and handing the cash over to the suspect, who then takes the dough and leaves the restaurant.

While we were definitely impressed with the clerk’s demeanor, we also couldn’t help but notice another critical detail about this clip: the bad guy failed to properly rack the slide on his pistol and thus was actually pointing a jammed gun at the clerk.

Given the vantage point of the surveillance camera, the jammed gun was easy for us to notice after the fact, but it’s something the clerk probably wouldn’t have seen in the heat of the moment.

According to the Kansas City Star, the suspect — later identified as 54-year-old Terry K. Rayford — was arrested after a retired police officer who recognized him from the robbery video reported seeing him to local authorities.

Police discovered an EAA Witness .45 handgun and a Jimenez 9mm semi-auto in Rayford’s car when they pulled him over. Rayford told police he had stolen both guns from his crack dealer to whom he owed money.

Rayford — who’s been busted for armed robbery multiple times and was on parole at the time of his arrest — is now facing one count of being a felon in possession of a firearm.

The Jimmy John’s clerk has been identified as 24-year-old Tuker Murray. Murray, who is actually an assistant general manager at that Jimmy John’s, told KCTV that Rayford had walked in to the store, ordered a sandwich and asked about what type of cheese and chips they have when he pulled out his gun.

Murray said he didn’t notice that the gun was jammed. He also said he was “amused and disgusted,” but not scared.

“I never really felt threatened,” Murray said. “I’ve been saying that all day and it feels like something stupid to say when there’s a gun pointed at your head, but I never really got the feeling that he was actually going to do anything.”

When police told Murray that Rayford has a long rap sheet with multiple armed robbery arrests on it, Murray said he “was actually really surprised, because it seemed like it was his first time.”

“If I would’ve known the gun was jammed, I would’ve tried to grab it since he was all the way over the counter,” Murray told TMZ in a separate interview. 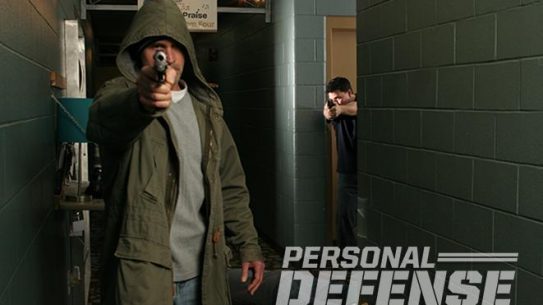 Active shooters can strike anywhere at anytime, so preparing and knowing the threat could...