Pedersoli Howdah: Fun to Shoot, But is it Good for Home Defense?

"It is a lot of fun to shoot, is beautiful and can quickly start up a friendly conversation at the range."

To paraphrase the immortal words of Sheriff Buford T. Justice, having a sawed-off, double-barreled shotgun pointed at you is “an attention getter.” Movies and pulp fiction have played this style of gun as the ultimate man-stopper for decades. A true short-barreled shotgun is only available to the general public after going through the additional paperwork and taxes required by the National Firearms Act (NFA). There are, however, alternatives that may fulfil your desires. The Pedersoli Howdah .45/.410 is a pistol with just such an alternative design. This breech-loading handgun has the look of the sawed-off shotgun, but is completely legal to own. It accomplishes this by having rifled barrels chambered for .45 Colt cartridges. The fact that it will also chamber .410-bore shotshells is just a happy coincidence.

Doubling Down with the Pedersoli Howdah

Designed by Davide Pedersoli, the Pedersoli Howdah is imported into the United States by Italian Firearms Group. The gun is based on the Ithaca Auto & Burglar pistol that was sold roughly 90 years ago. The original pistols were subsequently classified as “Any Other Weapons” (AOWs) under the NFA in 1934. Consequently, they are subject to the registration and tax provisions of that legislation. Combining the resistance to gun registration with the fact that few of the guns were manufactured, it can be difficult to find one of the original guns that is transferrable.

While clearly influenced by the Ithaca gun, the Pedersoli Howdah .45/.410 is definitely not the same handgun. As mentioned, the new handgun has rifled barrels and is chambered for the .45 Colt. This makes the gun a standard handgun under all of the current federal laws. The barrels are 10.25 inches long, and the pistol is more than 17 inches in total length. Because of this, existing import restrictions do not preclude Italian Firearms Group from bringing this gun into the U.S.

If you are familiar with double-barreled shotguns, you will feel at home with the Howdah. On top of the gun, and just behind the barrels, is an unlocking lever. When pushed to the right, this lever allows the barrels to tilt down and expose the chambers. The chambers accept standard .45 Colt round and both 2½-inch and 3-inch .410-bore shells. An integral extractor helps you to remove fired shells.

The Pedersoli Howdah has a double trigger—one for each barrel. A forward moving safety is located behind the unlocking lever.

The pistol grip is checkered for good control of the gun. A curved horn at the top of the grip prevents your strong hand from sliding over the top of the pistol. The forend is also checkered to provide a good grip when breaking open the gun. I also found the forend was a good place to support the handgun when shooting. That may be intuitive for a long gun, but it’s a bit different when shooting a handgun.

Pedersoli uses a receiver with a color-casehardened finish that is quite attractive. It is matched nicely with the deep bluing on the barrels and the semi-gloss finish on the stock. Up front, the gun has a ramp with a bead sight. The rear sight is a folding leaf with a V-notch. I’ve found that this kind of sight is fairly fast to employ in many circumstances. 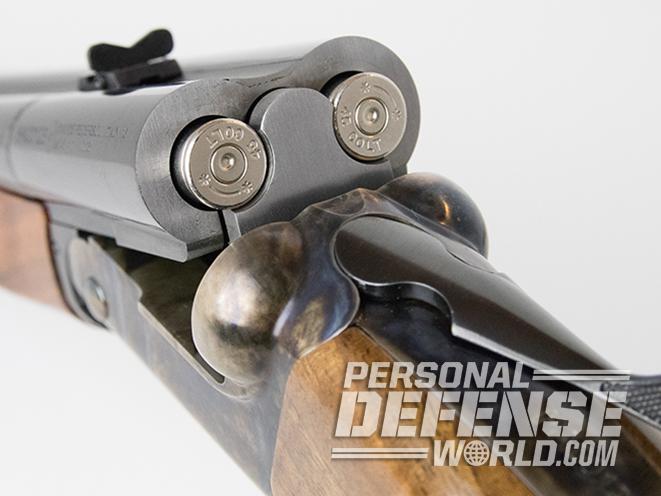 One thing is certain: When you are shooting the Howdah, fellow shooters at the range notice. The attention is not because the gun is especially loud or makes a big fireball. Rather, people notice its unmistakable resemblance to a short-barreled shotgun. Everyone is curious about it, and people will walk over to ask about it. Truth be known, when I had this one on the range, I think other people shot it more than I did. Universally, people loved it.

Compared to more traditional .45 Colt handguns, the recoil and blast from this gun are mild. Think about it. You are shooting standard handgun rounds from a 4-pound gun with barrels nearly a foot long. Even though the gun felt front-end heavy, I could aim and shoot it with one hand and not feel like I was struggling. When using my second hand, I preferred to support the gun under the barrels rather than with a traditional two-handed pistol grip.

I found the double trigger to be slightly less than ideal. The forward trigger seemed a bit too far forward for my hand. Every time I would prepare to fire, my finger would hit the side of the front trigger instead of landing nicely on the trigger face. If you have longer fingers, this may not be a problem.

Aiming the Howdah was simple when held either one- or two-handed. The front dot drops into the V of the rear leaf sight and you are on target. At very close ranges, 3 yards and in, the accuracy was good enough with .45 Colt loads to make consistent headshots. Move out to 7 yards and the double-barrel problem begins to show itself.

Similar to how a scope and bullet trajectory are only aligned at a specific point, the projectiles leaving a double-barreled gun also suffer from different impact points at different distances. The barrels can be regulated, which is to say the barrels are designed to hit the same point of impact at a set distance. However, no double gun can produce the same point of impact at all ranges.

I clearly saw this issue with the Pedersoli Howdah at a distance of 7 yards. Shooting with a support hand for maximum accuracy, I found the right barrel would hit the X-ring a little high, while the left barrel would hit left and slightly lower. This is not a mechanical error or design problem unique to this gun; rather, it is an example of how double guns will not hit at the same place at every distance.

Reloading the gun is easy but slow. The extractor does a good job of pulling a fired case from the chamber, but you still have to manually remove it. It is not well suited to reloading under pressure. If used for self-defense, spare ammunition would likely have to be carried loose in a pocket or dump pouch. 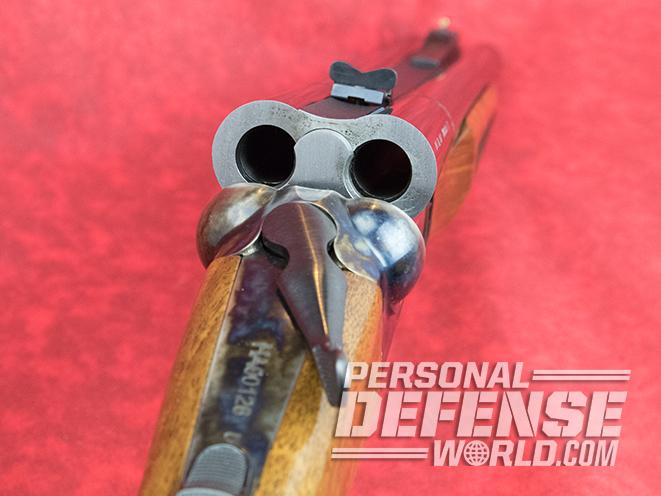 There are some guns suitable for home defense and others that are range toys. To me, this gun is better suited for the hobbyist. A shooting enthusiast will have a lot of fun with this pistol; I know I enjoyed shooting it quite a bit. But for the realities of combat, it leaves a lot to be desired. Even though the gun is large for a handgun, it suffers from being a two-shot pistol.

While good defensive rounds can be found in .45 Colt, the selection is much more limited than rounds in .45 ACP, 9mm or .38 Sepcial. A lot of shooters like the gun’s ability to fire .410-bore shotshells. But let’s be completely honest: The .410 is not the top choice for self-defense. Yes, it can get the job done, but there are other more efficient ways of putting down a violent attacker. Many .410 loads lack consistent penetration to reach vital organs, advertisements with exploding watermelons notwithstanding.

A lack of practicality for self-defense doesn’t mean this gun isn’t a great buy. It is a lot of fun to shoot, it is beautiful and can quickly start up a friendly conversation at the range. If you are looking for a home-defense gun, a modern striker-fired pistol or an AR-15 is a better choice than the Pedersoli Howdah. However, if you like the slick look and sheer fun of a double-barreled pistol, the Howdah is just the ticket.

For more information, visit the Italian Firearms Group at italianfirearmsgroup.com.