"For a closer look at modern pistols chambered for the .380 ACP, I recently tested the new Ruger LCP II and Beretta Pico side-by-side for this “Tale of the Tape.” Both pistols are interpretations of what each company believes to be the ideal, modern, concealed-carry .380 for today’s shooters."

One of the most prolific and innovative firearms designers of the 20th century, John Moses Browning brought a host of inventions that revolutionized the firearms industry. His designs were so pivotal that many are still in use today.

His biggest contribution to the industry was the development of semi-automatic and fully automatic firearms, bringing to market the Browning Auto­matic Rifle (BAR), the .50-caliber Browning machine gun, the Browning Hi-Power, the Browning Auto-5 shotgun and the highly celebrated Model 1911.

His influence extends beyond these legendary arms, though, and his efforts are still reflected in a significant segment of today’s products. One example is the still very popular .380 ACP round. Yes, the man who brought us the venerable .45 ACP, the stuff of legends, also brought the somewhat diminutive .380 to the world via handguns that were a bit more discreet and imminently easier to carry. 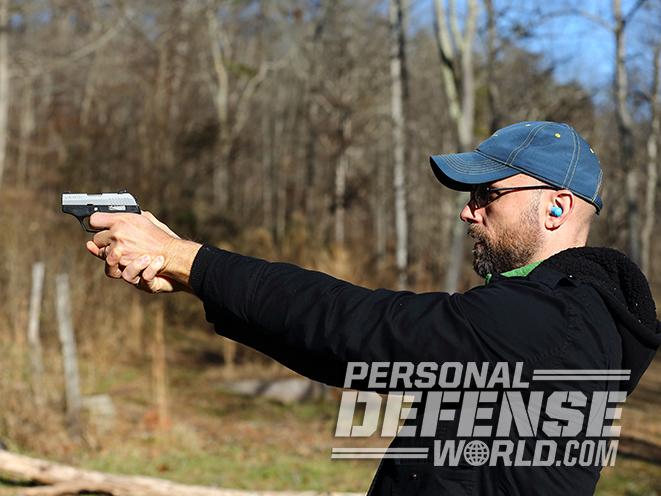 Introduced in 1908, the .380 ACP round was designed to be fired from the new Colt Model 1908 Pocket Hammerless. Soon after, the caliber became a huge success and was used not only by consumers, but also militaries and police agencies around the world for decades to come.

By today’s standards, especially here in the states, the .380 ACP round is eschewed by some experts as being anemic in comparison to more powerful offerings like the 9mm, .40 S&W and .45 ACP. Even the most ardent supporters will admit that the .380 ACP is the absolute floor for a reliable defensive weapon.

With advances in metallurgy and today’s polymer technologies, new life is continuously breathed into the century-old caliber by making pistols that fire the round lighter, more compact and easier to conceal. Additionally, the improvements made to modern ammunition, specifically hollow-point rounds, have enhanced the .380 ACP’s terminal performance, making it a more viable defensive round than ever.

For a closer look at modern pistols chambered for the .380 ACP, I recently tested the new Ruger LCP II and Beretta Pico side-by-side for this “Tale of the Tape.” Both pistols are interpretations of what each company believes to be the ideal, modern, concealed-carry .380 for today’s shooters. 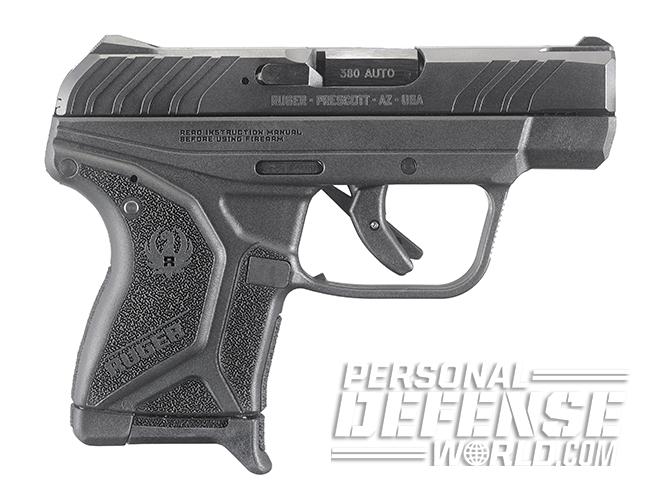 Ruger set the concealed-carry market on fire several years back with the introduction of the LCP in .380 ACP. Some believed the .380 ACP had run its course, however, once the 9mm version, the LC9, was released, but Ruger revisited the issue by changing the original pistol and bringing an improved version online in late 2016.

The specifications for the Ruger LCP II include a weight of 10.6 ounces (helped by the glass-filled nylon frame), an overall length of 5.17 inches and a barrel length of 2.75 inches. The LCP is also just 3.71 inches tall and 0.75 inches wide. Both the barrel and slide are blued, and the included six-round magazine has an extended finger rest just long enough so shooters can comfortably control the pistol.

Probably the most significant change with the LCP II is the inclusion of the new single-action (SA) trigger versus the double-action-only (DAO) trigger of the original. Still a hammer-fired pistol, the LCP II’s SA trigger pull is quite impressive indeed. With a smooth pull and clean break, my test sample’s trigger weighed between 4.5 and 6 pounds depending on where the trigger scale’s “finger” was placed on the trigger and integral safety. The average weight came in somewhere around 5.5 pounds, and you really have to try it to fully appreciate how good the trigger is for a pistol of this type.

The LCP II comes with an integral set of low-profile sights. They are all black and not easy to pick up quickly against dark backgrounds, though they are certainly better than just a groove and a front sight. Both the slide release and the magazine release are unobtrusive but still easily activated without shifting the small pistol around in your hand. Ruger also worked in a good amount of texturing into the grip to ensure a secure purchase on the pistol. The LCP II ships with one magazine and a nice, grippy pocket holster. 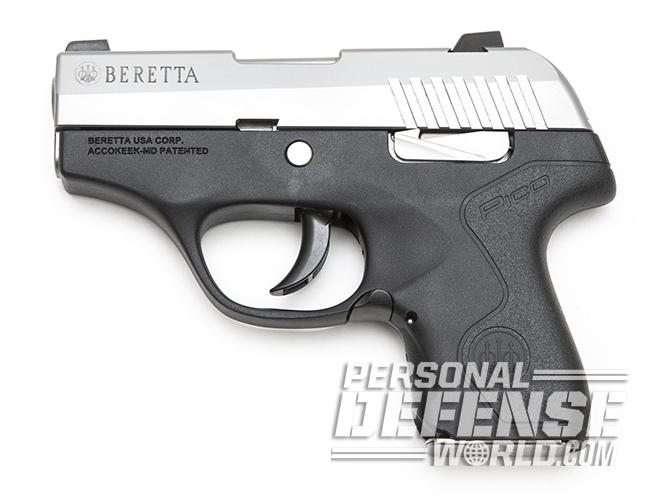 Despite being a micro .380 like the Ruger LCP II, the Pico has many design differences that definitely set it apart from Ruger’s offering. Beretta kept maximum concealability in mind while creating the feature set and specifications list for the diminutive pocket pistol.

Coming in at just 0.73 inches wide, the Pico is the thinnest .380 ACP pistol I’ve had a chance to handle and shoot. To achieve this measurement, both the magazine release and the slide release are flush with the slide and frame. The Pico is perfectly flat on both sides with no protrusions at all. Other specifications include an unloaded weight of 11.5 ounces, a stainless steel barrel and slide, an overall length of 5.1 inches, a barrel length of 2.7 inches and an overall height of 4 inches.

The Pico’s operating system is a DAO affair, meaning every shot requires a long trigger pull, and there’s no option for cocking the hammer for an SA shot. The average trigger pull of my test Pico was approximately 11.5 pounds. Of course, some may favor the heavier trigger pull for safety reasons.

The Pico is slightly taller than the Ruger LCP II because it comes with three-dot front and rear sights that are replaceable, though the factory sights are excellent for a pistol of this type. The pistol ships with a sturdy, zip-up carry case and two 6-round magazines. One magazine is flush-fitting while the other has an extended finger rest large enough for the entire grip to accommodate all three of my fingers, though that may vary for individual users.

I put both of these pistols through their paces at the range with Speer’s 90-grain Gold Dot hollow points and Winchester’s 95-grain Defend JHP ammunition from the Train & Defend line. As expected, both pistols were extremely reliable, and neither experienced a malfunction with a total of 300 rounds being fired between the two.

As mentioned, the Pico has a set of extremely nice three-dot sights, and the very first five-shot group from a standing rest at 7 yards was one hole measuring just 0.63 inches. The average of five 5-shot groups for the Winchester and Speer loads came in at 1.62 and 1.41 inches, respectively. Shooting did get a little problematic the more groups I fired because of the heavy trigger pull, which was exacerbated by my trigger finger rubbing against the inside of the triggerguard and eventually developing a blister after extended use.

The Ruger LCP II’s accuracy was almost as good from the standing rest with average group sizes of 1.63 and 1.67 inches for the Speer and Winchester rounds, respectively. I attributed the accuracy difference to the LCP II’s rather small and basic black sights, which were difficult to pick up against the dark targets. If this were my personal pistol, I would remedy the issue by putting some fluorescent paint or fingernail polish on the front sight.

The Ruger’s advantages include the smoother and lighter trigger pull and the larger triggerguard. These factors, despite the factory sights, allowed me to stay on target more easily and maintain better control during rapid follow-up shots.

There were differences between the two pistols in terms of handling characteristics as well. While the Beretta Pico is easy to conceal with its thinner profile, the flush-mounted slide release was difficult to engage and not an ideal arrangement for quick combat reloads. The magazine release on the Pico is ambidextrous, but because of the pistol’s small size, I was not able to engage the release effectively without taking my hand almost off the grip entirely and hitting the release on both sides with my thumb and forefinger.

Though the LCP II is slightly wider than the Pico, both the magazine and slide releases were easily engaged quickly without significantly shifting the position of the shooting hand. Giving up a few hundredths of an inch in width for this operability under stress is worth the sacrifice in my opinion.

Both pistols are similarly priced if you take into account the cost of a second magazine for the Ruger LCP II. The dimensions of both handguns are almost the same, with the Pico weighing an ounce more and being a few tenths of an inch taller with the sights.

The Pico offers great sights, a corrosion-resistant stainless slide and barrel, and the relative safety of a heavier DAO trigger. Conversely, the Ruger is lighter and more compact, has an exquisitely clean-breaking trigger, and sports controls that are easier to manipulate under stress.

As for the final verdict, I can’t make the call. Everyone is different, and it’s up to the end-user to decide what they value most in a 21st century .380 pocket pistol. Hopefully, advances will keep being made and these questions will continue to be debated for another century to come.