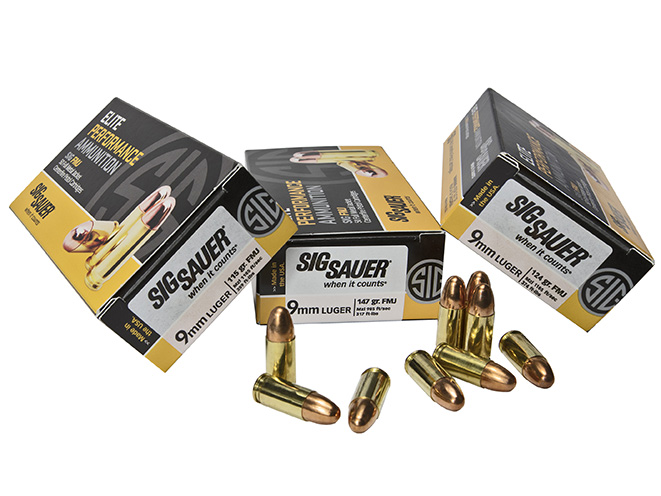 Sig Sauer may be best known for its high-quality pistols and rifles, but its Elite Performance Ammunition line is nothing to sneeze at, either. The New Hampshire-based manufacturer announced it has added 124gr and 147gr bullet weights to its 9mm FMJ (Full Metal Jacket) offerings, giving customers a choice of three 9mm bullet weights—115gr, 124gr and 147gr—in both the V-Crown jacketed hollow point (JHP) personal defense ammunition and SIG FMJ target loads.

Touted as being affordable and consistent, Sig FMJ ball ammo approximates the performance of corresponding JHP loads, ensuring a smooth transition from target ammo to carry ammo. The copper-coated lead bullets in the Sig FMJ ammo line have a precise and uniform style, resulting in reliable accuracy, the press release says.

“SIG FMJ ammunition is designed specifically for practice and competition shooting, and given the sheer popularity of the 9mm caliber, expanding the FMJ line to mirror the V-Crown offerings was an important next step,” said Dan Powers, Sig’s ammunition division president, said. “These premium target rounds feed as smoothly as our V-Crown JHP rounds and perform and feel almost identical to the V-Crown loads when shooting, making them ideal practice rounds.” 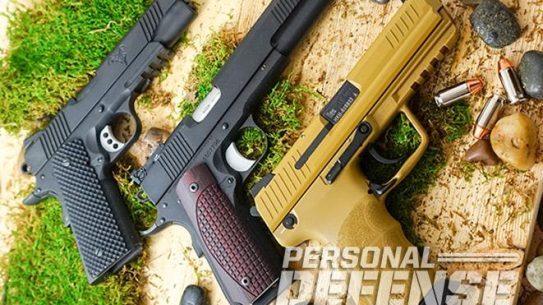 Scoff if you must, but these three .45 ACP pistols are ready to buck...