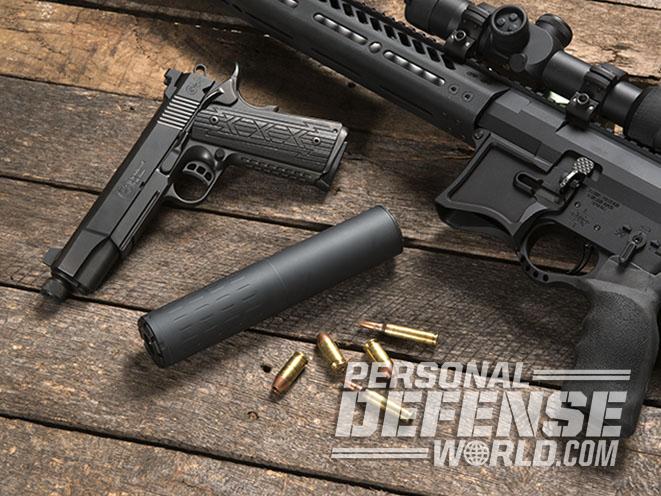 1 of 10
SilencerCo Hybrid
To maximize your capabilities in close quarters, you need to invest in a quality sound suppressor, and SilencerCo’s Hybrid allows you to suppress a variety of weapons with just one silencer. 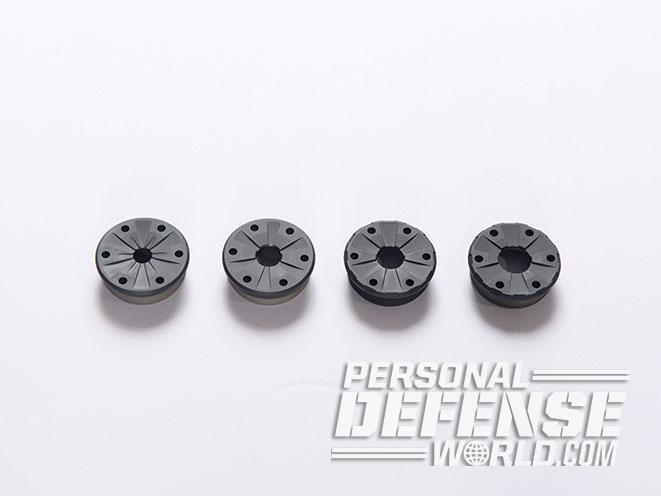 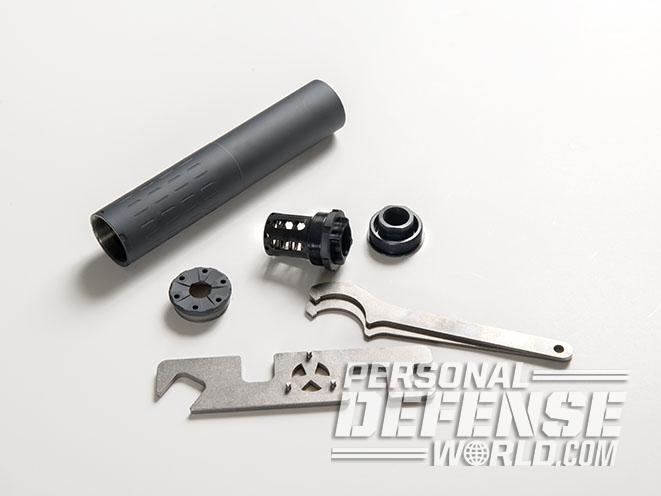 3 of 10
SilencerCo Hybrid
The Hybrid comes with a .46-caliber front cap, a 5/8×24 direct-thread mount, a piston housing and the required tools. 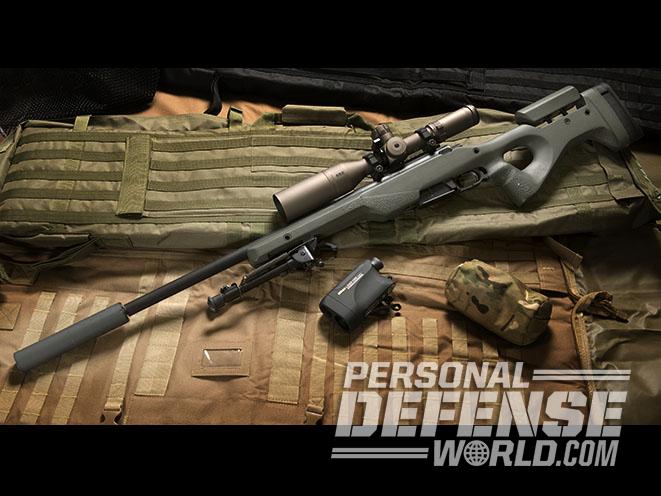 4 of 10
SilencerCo Hybrid
With its heat-treated stainless steel baffles and Cerakote-finished housing, the Hybrid is durable and consistent enough for use on duty rifles and carbines as well as bolt actions built specifically for long-range marksmanship. 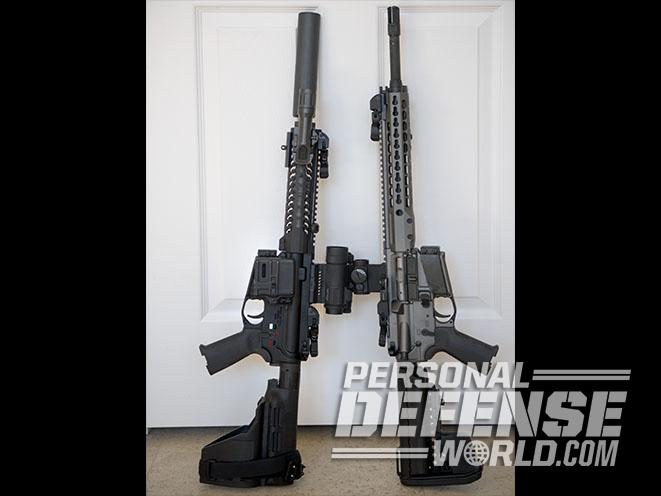 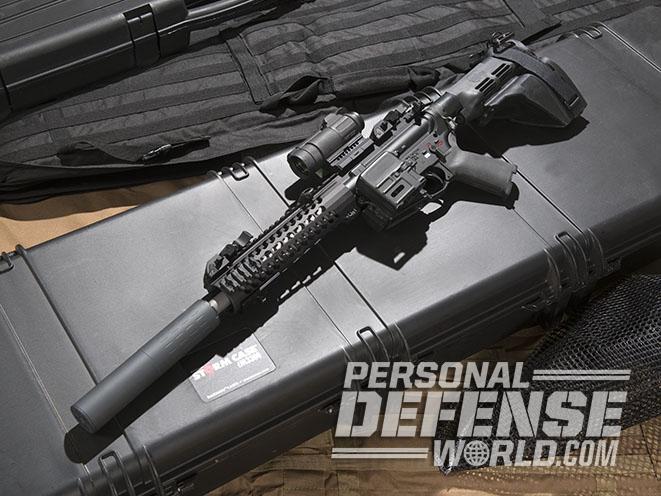 6 of 10
SilencerCo Hybrid
The author mounted the Hybrid on his 10-inch-barreled 300 Blackout pistol. 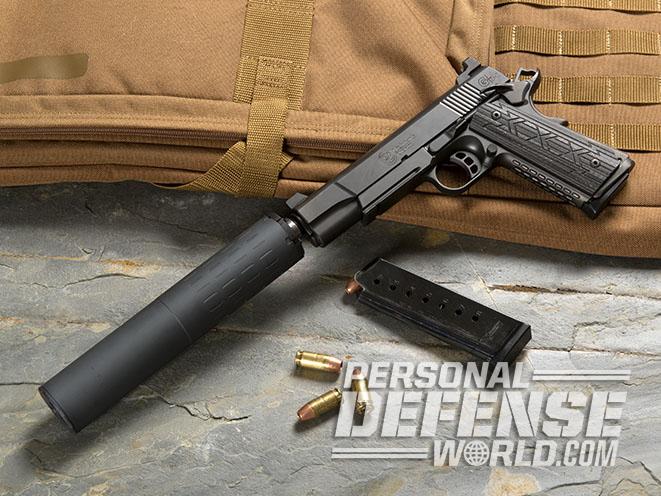 7 of 10
SilencerCo Hybrid
The suppressor also works well on handguns. 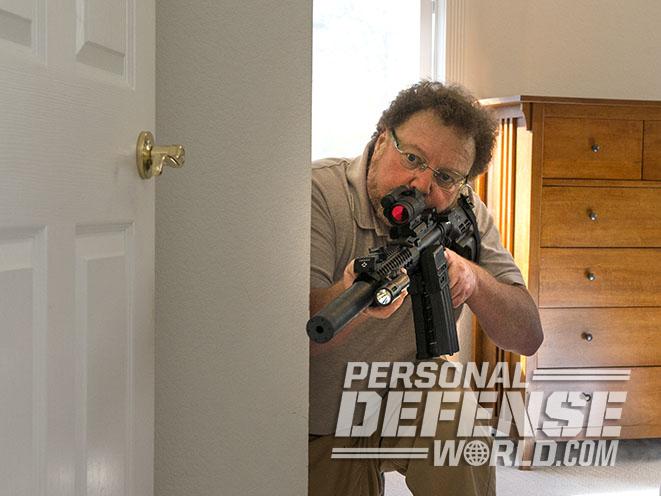 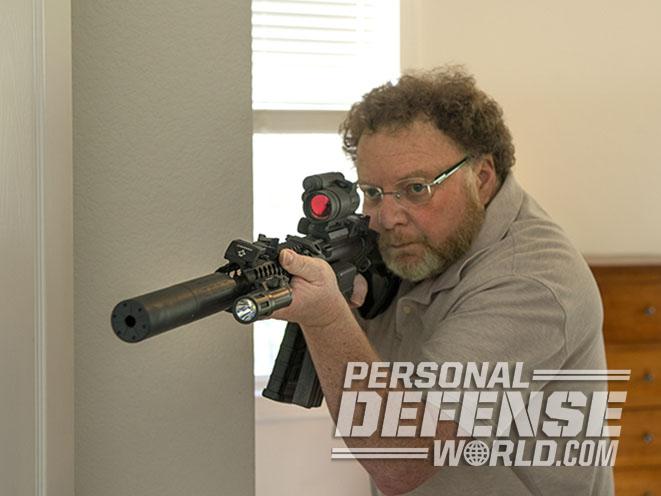 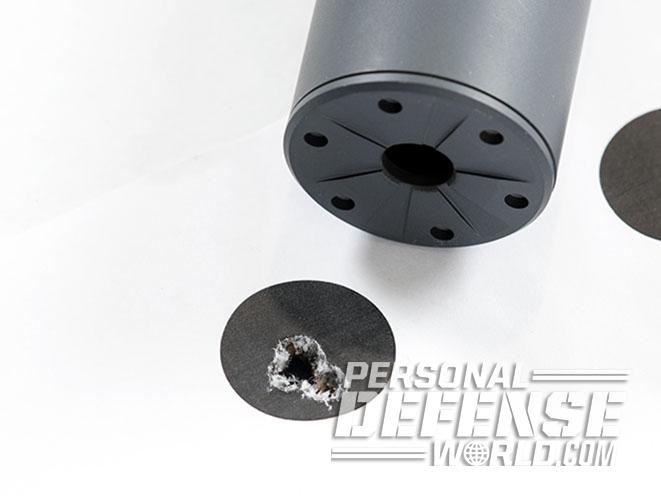 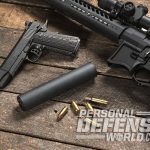 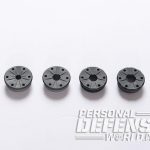 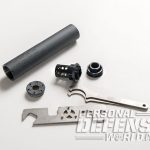 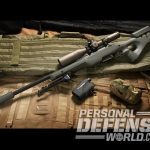 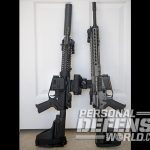 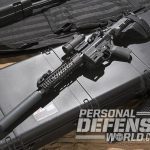 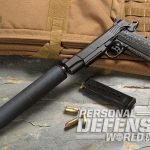 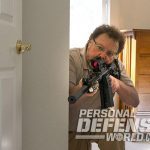 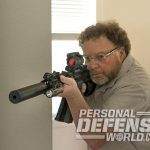 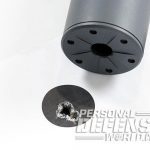 My working theorem for home defense is to use a handgun to gather my family to a safe room, then guard the safe room with a long gun. While it can certainly be useful, a safe room does not need to be fortified, nor does it have to be fancy. It just needs three things: 1) a location where all family members know to gather in an emergency; 2) has a continually charging cell phone, and perhaps also a land line, to call police; 3) contains a long gun. Eye and ear protection for the family and extra ammunition are also good to include.

I prefer using a handgun when navigating my house because it requires only one hand to effectively aim and shoot. My support hand is available to work door knobs and light switches as needed, physically deal with family members to get them to the safe room and to use the telephone to dial 911 if there is no one else available to do it. It is also much easier to navigate hallways and “pie” openings with a handgun than with a long gun. If you doubt it, just try traversing your house while shouldering, aiming and dry-firing a long gun with just one hand.

While a shotgun certainly has all the stopping power needed, I prefer a rifle to defend my safe room due to its lighter recoil—which translates to faster follow-up shots—and much higher capacity. The downside to using a long gun indoors, whether it be a shotgun or rifle, is the tremendous noise. If you think shotguns and rifles are loud outdoors, they’re much worse inside, and small rooms compound it even further. The noise level is so loud that it can actually stun you, reducing or possibly even eliminating your ability to respond to the threat. If you think about it, it’s the same concept as the flashbangs police and military personnel use to gain advantage over their adversaries.

My solution to the deafening noise problem of is to add a suppressor to my rifle. My weapon of choice is either a short-barreled rifle (SBR) or a pistol in 300 Blackout. I chose the 300 Blackout over the 5.56mm NATO because the former is designed to reach its full velocity within a 10-inch barrel, so a short barrel won’t give up much in terminal ballistics. The firearm’s short length also allows me to add a suppressor and still maintain a very usable, overall weapon length. A 10-inch SBR or pistol with a suppressor is approximately the same length as a standard 16-inch-barreled AR.

If you want to suppress various weapons without becoming a BATFE stamp collector, having a sound suppressor that works on several platforms and calibers is just the ticket. Given the expense for a quality suppressor, the added cost of the tax stamp and the agonizingly long wait for paperwork to clear BATFE jail, a single suppressor that serves multiple purposes make a lot of sense. To that end, SilencerCo has answered that call with the aptly named Hybrid suppressor.

The SilencerCo Hybrid’s modular design is not only multi-caliber—it’s also multi-platform, working on both handguns and rifles. Rated for 9mm ammo all the way up through the .45-70 Government, it is also suitable for submachine guns. The Hybrid is rated for use with .45-70 and .458 SOCOM barrels as short as 16 inches and all magnum calibers up to .338 with barrels as short as 18 inches.

The SilencerCo Hybrid achieves its flexibility through a series of interchangeable front caps and mounts. Front caps are available in 9mm, 5.56mm, 7.62mm and .46. SilencerCo offers four direct-thread mounts, two quick-release mounts for use with flash suppressors and muzzle brakes, and 10 piston options, making the Hybrid one of the most flexible suppressors on the market.

In addition to the suppressor itself, the SilencerCo Hybrid is supplied with a .46-caliber front cap, a piston housing with a spring, a 5/8×24 direct- thread mount, two spanner wrenches, a Hybrid multi-tool and a soft sock for storage. The pistons and other modular components are available as separate options. Rather than including all of the available accessories with the suppressor, purchasing the components separately allows the shooter to only pay for the parts that they need. This can be a huge cost saver.

The Hybrid’s housing is made from titanium and finished in a grey Cerakote. The baffles are made from heat-treated stainless steel. It is 7.8 inches long with a 1.57-inch diameter. It weighs in at 13.8 ounces with a direct-thread mount. SilencerCo states that average sound ratings at the muzzle are:

Assembling the SilencerCo Hybrid for pistol use requires inserting the correct piston into the piston housing, screwing the piston housing into the rear of the suppressor housing and installing the appropriate front cap. For rifle use, install the correct direct-thread or quick-release mount along with the corresponding front cap. The process is simple and takes less than a minute. Front and rear threads on the suppressor housing are different so it is impossible to mount the components in the wrong location. Given its modular design, it’s important to take your time to ensure that both the front and rear component choices are correct for the chosen caliber.

When I test a firearm, functioning and reliability are my first concerns. When it comes to suppressors, my first test is making sure the devices are ear safe. To test this, I shoot with my hearing protection slightly ajar, so one ear is not 100-percent covered but mostly protected. If the volume is acceptable, I expose a little more of my ear with each shot until I am confident that the suppressor is ear safe.

I installed the .46-caliber front cap and the 0.578×28 piston into the SilencerCo Hybrid suppressor and threaded it to my 1911’s barrel, making sure it was tight. I loaded the magazine with some Federal 230-grain FMJs and blasted away. There wasn’t any excessive sound. In fact, the pistol was amazingly quiet. Shooting the suppressed handgun was a blast—in a good way!

After removing both caps, I installed the 7.62mm front cap and the 5/8×24 direct-thread mount and added the Hybrid to my 300 Blackout SBR. As expected, the Hybrid remained ear safe, with no problem with excessive sound. Replacing both caps once again, I tested it on my 5.56mm rifle with the same positive results.

Even though combat accuracy is more relevant than supreme accuracy when it comes to self-defense, I tested the Hybrid for point-of-impact shifts and accuracy changes. Due to the weight attached to the end of the barrel, all suppressors will lower the point of impact, but I was looking to see if my group sizes increased or if the groups shifted sideways.

I mounted the SilencerCo Hybrid to my 6.5 Creedmoor bolt action, which was built by Terry Cross of KMW Long Range Solutions. With its Surgeon action, Krieger barrel and Hornady ammunition, it is my most accurate rifle system. And I’m happy to report that I was able to match my personal best—a 0.38-inch group at 100 yards—with the Hybrid with no horizontal point-of-impact shifts. This proves that the sound suppressor doesn’t create any negative accuracy-robbing effects.

It is important to note that when manufacturers measure sounds and deem their suppressors to be ear safe—meaning that the noise level will not cause permanent hearing damage—that sound rating is for shooting outdoors in an open location. A suppressor will certainly be louder, and most likely no longer ear safe, when used indoors. The smaller the space, the louder it will be. If you have time during an indoor altercation, it is advisable that you use electronic hearing protection in addition to your suppressor. The advantage that electronic hearing protection offers over passive designs is that it amplifies ambient noises, allowing you to hear better than you would normally. Given the speed at which lethal confrontations can happen, ear protection may not be an option. In that case, the suppressor will keep you in the fight and do far less damage to your hearing than shooting indoors without one.

The SilencerCo Hybrid’s modularity allows you to keep one suppressor if you change calibers on your defense rifle or move it from gun to gun. From 9mm handgun to magnum rifle shooting, the Hybrid allows you to play on the range during the day with lots of different guns and remount to your rifle to defend your home when you’re done.

I typically shy away from multi-purpose products because, most often, they are good for a lot of uses but not great for any of them. I found the opposite to be true with SilencerCo’s Hybrid suppressor. Its multi-caliber and multi-platform abilities, matched with its great performance, make it a top choice with lots of versatility.

This article was originally published in ‘Personal & Home Defense’ Spring 2017. To order a copy, visit outdoorgroupstore.com. 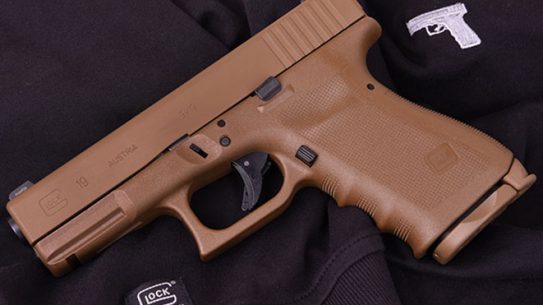