Beyond the Basics: Safer Gun Handling Tips for the Range

Keep the gun pointed away from your body, and do not cross your support hand.

The mandates of gun safety are vital. But to be completely safe, our gun handling skills must go beyond just the basics.

Probably one of the most dangerous and common gun handling mistakes is “lasering,” also known as “crossing,” “muzzling” or “sweeping.” Many shooters seem to forget that bullets have a very long reach, and that everyone who is placed in front of a muzzle is in mortal danger. The term “lasering” illustrates the concept that we can visualize a powerful laser that destroys anything that is in front of it, at any distance—in reality, not unlike a firearm. Take special care not to point the gun at yourself or others. When walking around on the range, or back and forth to the shooting line, always make sure that your gun’s muzzle is pointed in a safe direction downrange.

Unsafe movements and lasering are all too common while manipulating a firearm’s action. Many people like to turn a gun sideways to work the action, but this potentially points the gun in an unsafe direction. When racking the slide of your semi-auto or opening the cylinder of a revolver, it is important to pay close attention to both your body’s movements and the movements of the gun. Don’t keep your body stationary and then rotate the gun in a dangerous direction. Instead, turn your body, in relation to the gun to keep the muzzle pointed safely downrange, away from others.

Lasering is not just an issue for bystanders—it’s also a major concern for shooters themselves. When drawing a gun or reholstering, never point the muzzle in toward your body. If you can’t get the gun into the holster without wiggling it back and forth, or using your support hand to hold it open, that’s a sure sign that you need a better-quality holster.

While everyone knows the rule about treating all guns as if they are loaded, people consistently laser themselves and others with the muzzles of their “unloaded” guns. It seems that people feel that if the gun is unloaded, they no longer need to be concerned about where it is pointing. There are two vital reasons why the “all guns are loaded” mandate is important. 1. The assumption that “it is unloaded” may be mistaken. 2. If you always treat a gun as if it is loaded, you will permanently imprint proper gun handling techniques in your mind and won’t mistakenly handle a loaded gun improperly. An astounding number of gun accidents happen with “unloaded” firearms.

The drawing of a firearm is potentially one of the most dangerous areas of gun handling. Make sure that your support hand follows or parallels the gun during the draw and does not get ahead of the muzzle. Make sure you don’t laser your legs or feet as you bring the gun forward.

Do not release the external safety (if your gun has one) until you are on target and ready to fire. And never place your finger in the triggerguard or on the trigger unless you are prepared to destroy whatever the gun is pointing at.

Many accidental discharges happen while reholstering because the shooter has left his or her trigger finger in the triggerguard. Every instant that you are not firing your weapon, your trigger finger must be high against your gun’s frame.

When you have finished shooting on the range, lock the slide back on semi-autos or open the cylinder on revolvers. Keep them that way until you are ready to shoot again. This allows you and everyone else to see that the gun is empty. If you hand your gun to someone else, give it to them open, grip first, pointed downrange.

When checking to see if a semi-auto is loaded, some people use the “pinch” technique, which I find scary. This entails gripping the slide from underneath, just behind the muzzle, and pulling the slide back slightly in order to see if it’s loaded. If an accidental discharge happens, I don’t want my fingers that close to the muzzle. If you need to rack or pull back the slide, get into the habit of griping it from the rear of the pistol.

When unloading, be sure to remove the magazine first, then rack the slide to clear the chamber. Doing it in the reverse order leaves a round in the chamber. When you shoot to slide lock, don’t assume the gun is empty. Always check because a semi-auto’s slide could also lock through vibration or because of a mechanical problem, leaving you with a live round still in the gun.

Just because the safety is “on” does not mean the gun is safe. See the first mandate.

When racking the slide to unload, the first instinct for many people is to grab the slide from the top with the entire hand, but that is very unsafe. While it may offer a strong grip, it is inherently dangerous because your flesh covers the ejection port. Open the slide of a semi-auto and look inside towards the back. Does the ejector have a resemblance to a firing pin? Many people have learned the hard way that when a live round is dislodged, the primer can get pushed back against the ejector. The resulting detonation will destroy the flesh that covers the ejection port. Resist the temptation for a stronger grip, and keep your hand and face far away from the ejection port while unloading or clearing a jam. 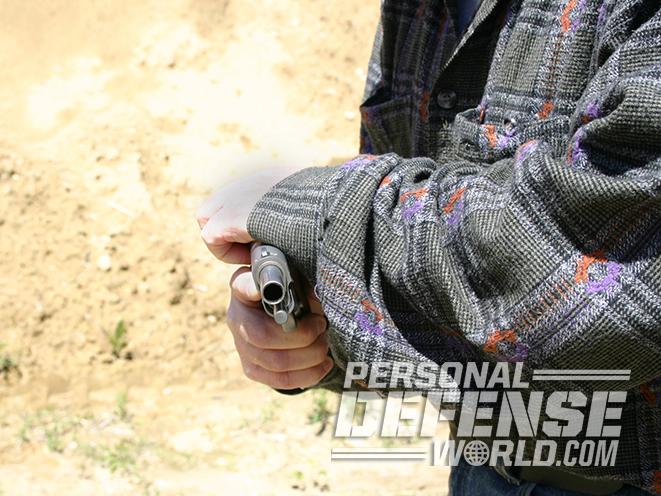 Whenever you practice with a new gun, a new holster or a new technique, always start at a slow and safe speed. Increase the tempo in steps only when competence and muscle memory are achieved.

With familiarity comes complacency. The more we train with our firearms, the more we owe it to ourselves to be extra cautious. If you see someone on the range demonstrating unsafe gun handling skills, approach them politely and explain how they can conduct themselves in a safer manner. The life you save may be your own.