by Fred Mastison
in Guns, Rifles
0

Carbines make sense for home defense because of their handling characteristics, ease of use and ammunition capacity. With the right gear and training, you can effectively stop a home invasion.

It’s 3 a.m. and you are comfortably in bed. You sit straight up, however, as you hear the one sound you hoped would never happen—breaking glass.

In a flash, you are thrown into a home-invasion situation. But you are responsible and have done your homework. You have trained with professionals and even worked with your family to develop an action plan should this event occur. Now is the time to act and you reach down and grab your…?

One of the oldest arguments in the firearms world—short of debating the effectiveness of the .45 ACP over all other ammo—is what weapon works best for home defense. There was a day when “shotgun” was the end of that sentence almost everywhere. The almost mythical power of the 12 gauge was understood by everyone. As skills with handguns grew, they quickly became the “go-to” weapons for home defense. They are easy to maneuver and much more enjoyable to shoot. There is another option, though. I am here today to ask you to consider carbines as a solid choice as well. But before you start chiming in with the “overpenetration” argument, let’s take a real look at the pros and cons of using a home defense carbine. 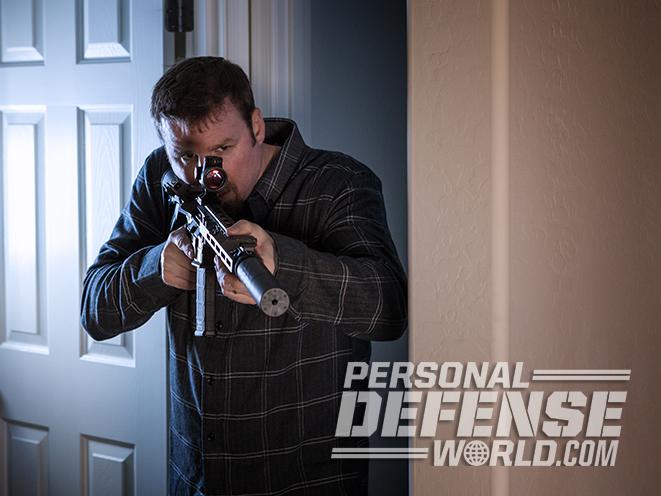 More keyboards have seen diatribes on the ineffectiveness of the 5.56mm NATO round than most other topic in the industry. Claims of low stopping power and overpenetration are the main tags associated with the round. While this discussion alone could fill hundreds of pages, let’s just cut to the quick and draw a distinction between personal-defense ammunition and military ball ammo. This can be said really for any defensive load. You would not load standard ball ammo into your defensive carry handgun, nor should you do it with a home defense carbine. There have been exceptional advances in ammunition, and the clichés just don’t hold true.

Ammunition designed for personal defense assures fragmentation. Upon contact with an assailant, the rounds break into smaller pieces, causing additional wound channels and most likely not over-penetrating. Rounds that miss the bad guy and end up in the drywall also break up. While they are indeed still dangerous, the potential for injury is much lower.

The ultimate goal with bullet design is to dump as much of the ballistic energy into the target as possible. By fragmenting and not just punching through, the bullet is much more capable pf creating serious wounds and ultimately stopping the threat. Rifle rounds also have the capacity to create devastating cavitation and secondary injuries. Handgun rounds simply do not have the velocity to inflict this type of damage. Are rifle rounds flawless and guaranteed? No. But there are no guarantees with any type of ammunition. 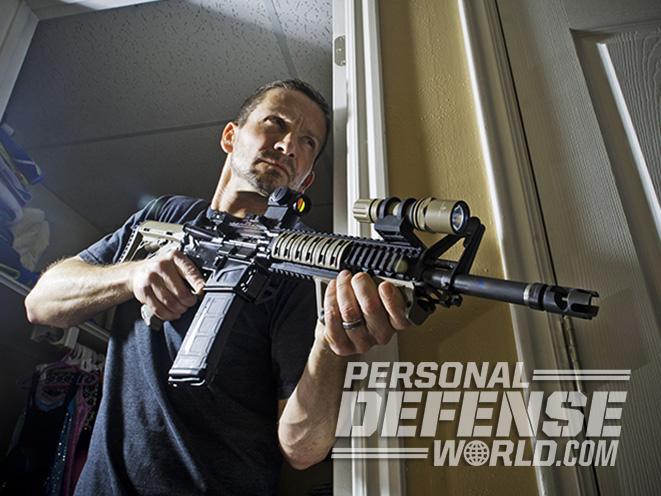 With that hurdle covered, let’s talk about the rifle in general as a home-defense weapon. The rifle is much easier to shoot accurately than a handgun or even a shotgun. It is obviously not as easy to maneuver, but rifles have a much more natural pointing ability, thus a higher probability of hitting your target.

The separating factor between shotguns and rifles is magazine capacity. Standard AR magazines have a capacity of 30 rounds, which keeps you in the fight much longer without having to reload. They also are easier to run because they offer less recoil than their 12-gauge relatives. Their ease of operation also contributes to more people spending time on the range with them. While a shotgun has fantastic stopping power, few people spend any significant time with them on the range or, more importantly, in classes. There is no magical elixir that will turn you into a skilled close-quarters gunfighter. It takes professional training and repetition on the range. The carbine makes both of those easy to accomplish.

What Your Home Defense Carbine Needs

It is important to consider the configuration of the rifle you choose to defend your life with. First on the list of things to consider is quality. While I will not go into what you should or should not buy, I will say this: You get what you pay for. Yes, you can overpay, but let’s not cloud the topic. In short, do not buy a cheap rifle just because it is cheap. You may be defending the life of a loved one, and this is not the time to be cutting corners.

Beyond brand, let’s specifically look at the configuration of the gun itself. I suggest a rifle with a 16-inch barrel. This provides a good balance between maneuverability and muzzle velocity. You may be interested in investigating a short-barreled rifle (SBR) with a 12-inch barrel, for example, but make sure the ammo you choose will still perform out of a shorter barrel. Ammo is designed to work its magic at certain velocities, and the shorter the barrel gets, the less velocity the rounds have. Understand also that SBRs fall under the National Firearms Act (NFA), meaning they’ll require some paperwork and additional fees. You will also want to check your local laws as well.

While we are on the NFA topic, I am a fan of keeping my home-defense rifle suppressed. Rifles are brutally loud out on an open range, and that is painfully amplified indoors. Firing a rifle indoors will cause hearing damage to you and anyone else in close proximity. While you may brush this off as the cost of doing business, it can have lethal consequences. The dirt bag you just dropped may not be alone, and your now-impaired hearing may not pick up the sound of the second dirt bag coming in behind you. If you cannot get a sound suppressor, I suggest keeping a set of amplified ear protection as part of your defense kit. They will serve to protect your ears while amplifying any ambient noise.

Next on my build out list is a light. Flashlight technology has come a long way, and we now have high-lumen, lightweight LED lights at our disposal. The rifle becomes clumsy if you are trying to hold a light in one hand and your blaster in the other. There are countless options in lights, but I would suggest mounting a light with 200 lumens in the 12 or 6 o’clock position on your rifle. Lights mounted in the 3 or 9 o’clock position tend to reflect off walls as we begin to clear corners and the like. This can affect our own vison and burn away the chemical visual purple (rhodopsin) in our own eyes which helps us see better in low light.

While we are talking about seeing the threat, it is time to talk about optics. I am a fan of red-dot-style sights for home defense. They allow us to more easily acquire the threat while still having the ability to see a decent area downrange. Once again, it is important to make an investment in your targeting devices. Do not grab a cheap clone from an Internet auction site and think you are good to go. Yes, it is an electronic device and can fail. However, if it is a quality item and is well maintained, the probability of it failing is minimal. A side note on this, however, comes back to training. There are techniques that deal with an optic when it fails in close-quarter scenarios. If you are in close quarters, generally what you see though the optic tube can be sufficient to aim and fire. There is much more on that, but I will leave it for another time. Suffice it to say that you need to get training.

The stock on your rifle should be collapsible and set up specifically for you. Do not close your stock down to store the gun. It needs to be ready to fight in an instant. Taking time to adjust the length of pull is wasted time. The last item I will talk about is a sling. Some people discourage the use of a sling on a home-defense rifle, and I can appreciate their concerns. However, I believe the benefits outweigh the downsides. The number one perk of having a sling is it allows you to have your hands free should you need them without having to set the rifle down. If you make your way through the house to get a child, you may need one or both hands to make that happen. My suggestion is a good two-point sling like the Vickers model from Blue Force Gear. I have a couple billion miles on mine and it has served me well. 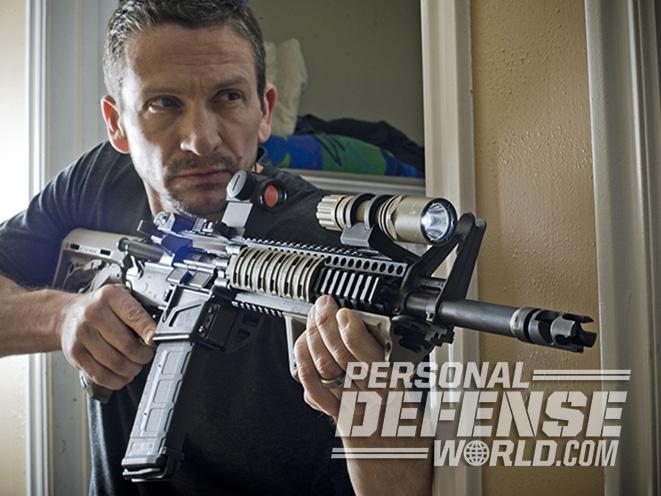 In my opinion, you don’t need to add anything else to your home-defense rifle. Can you add more? Certainly. I have had students arrive at courses with everything short of a toaster attached to their rifle. What I see, though, is that by day two or three, most of the extra weight has been shed away. The laser designators, offset reflex sights, magnifiers and extra magazine holders end up in the range bag, never to see light again. Remember that we are going to be using this weapon in our humble homes. We are not headed to Afghanistan with them. We will need to be fast, light and lethal. Anything that diminishes that capacity is problematic.

Modern carbines have the potential to be exceptional home-defense weapons. Rifles are used by almost every SWAT team in the country because of their effectiveness indoors and in close-quarters scenarios. If we feed them the right ammunition and build them out for the job, they will serve us well should the need arise. Throw in a good dose of professional training and you are now equipped to deal with just about anything that goes bump in the night.