A quick-thinking homeowner used a machete to fend off a pack of intruders during a failed home invasion in Sarasota, Fla., and the entire incident was captured on a home security camera. Watch the footage above.

The video starts off with the homeowner and another person sitting around a table and talking at 4:46 a.m. when the homeowner suddenly turns around, immediately picks up his chair and goes after the suspects who entered the property offscreen.

The homeowner then picks up a plank of wood to defend himself, but he’s quickly chased off by three masked suspects—armed with a shotgun, machete and crowbar— who are now visible on the surveillance camera.

Just when the three intruders appear to think they have the upper hand, the homeowner bursts back into the room with a huge machete of his own and send two of the suspects running. The third man tries to get away as well, but the homeowner and his associate can be see physically restraining him until law enforcement arrives.

In a press release, the Sarasota County Sheriff’s Office says the homeowner provided a description of the suspect’s vehicle to responding deputies, who quickly located it at a gas station nearby. Four men wearing dark clothing were siting inside, one of whom was carrying zip ties.

All five men were interviewed by detectives and two of them admitted to the crime.

Detectives continued to gather evidence and were able to obtain the footage you see above. The suspects who committed the actual break-in were identified as Alen Beltran-Vazquez, Angel Cabrera-Basulto and Ronier Jauregui-Lorente. Beltran-Vazquez is the one who was held by the homeowner.

Jorge Valido-Leyva and Roberto Salcedo-Balanza were identified by authorities as the other men in the vehicle. Through interviews, it was revealed that they helped coordinate and plan the robbery.

The investigation into the incident is ongoing and additional charges are pending, the Sarasota County Sheriff’s Office said. 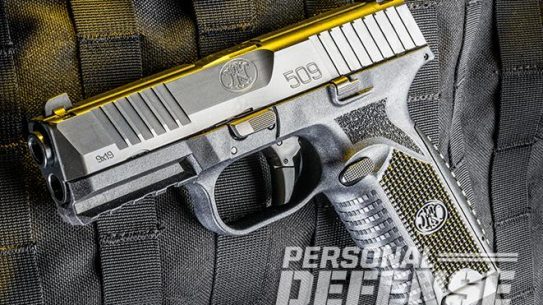 Those in the market for a service-style, polymer-framed semi-auto pistol should definitely give the...