"Nighthawk has another winner on its hands."

The American kestrel (Falco sparverius) is the smallest and most common falcon found in North America. But despite their size, they are accomplished hunters that will often hover in flight before diving in on their prey. The Kestrel is also the name of one of Nighthawk Custom’s newest pistols. I recently received a stainless Nighthawk Kestrel for evaluation and was immediately taken with the gun. The Nighthawk Kestrel could be considered the first cousin to my Heinie PDP Commander. In fact, Richard Heinie assisted in the development of the Kestrel and the Lady Hawk.

The Kestrel is based on Nighthawk’s forged frame and slide, which are machined in-house in the company’s recently expanded shop. My test sample was an all-stainless pistol that had been carefully blasted to a matte grey finish. The finish was so smooth and uniform that it could be mistaken for hard chrome.

I immediately appreciated that the Kestrel is a true Commander-style pistol with a 4.25-inch barrel and a traditional bushing and recoil spring. When I field-stripped the pistol, I found the inside surfaces as clean as the exterior, and I couldn’t detect any machining marks. I also liked the clean slide; it was void of any markings except the Nighthawk logo on each side, behind the cocking serrations.

What makes the Nighthawk Kestrel different is that it is based on the same frame as the Lady Hawk. Nighthawk designed the Lady Hawk around a newly configured frame that reduced the overall circumference from the standard 1911 frame. The frontstrap and mainspring housing have been thinned to reduce the front-to-back dimensions. In addition, the Kestrel comes standard with ultra-thin Alumagrips. When combined with the high-cut frontstrap and beavertail grip safety, the grip is amazingly comfortable. Heinie Signature scallops are applied to the frontstrap and mainspring housing. These provide a nicely textured surface for adequate control without being abrasive.

The operating controls of the Kestrel are classic Nighthawk, and they’re machined from tool steel. The extended beavertail is precisely fitted and features a speed bump for positive engagement. The edges of the single-sided thumb safety have been beveled, and the paddle is contoured.

The slide stop is one of my favorite designs, with a cleanly polished ledge that is relieved for a positive purchase. The mainspring housing is perfectly contoured to the frame, and the butt is slightly rounded, eliminating the sharp edge that can dig into the shooter’s palm. The trigger is Nighthawk’s three-hole match trigger. The trigger pull on my test pistol averaged a clean 4 pounds with no creep or grit. Finally, the magazine well has been beveled to aid in fumble-free reloads.

The top of the slide has been serrated, as has the rear of the slide. A Heinie SlantPro rear sight is matched with a dovetailed front sight. Both front and rear sights feature Straight Eight tritium capsules for the “dot on a dot” sight picture. The 4.25-inch, match-grade barrel is mated with a match bushing and then crowned with a deep recess. The recoil spring plug has been engraved with Heinie’s logo and gives tribute to his contribution to the design.

I wanted to compare the diameter of the Nighthawk Kestrel’s frame to my Heinie PDP Commander. I cut a ribbon of paper and then measured the diameter of the center of the frame, just below the grip safety. I also measured the diameter at the base of the frame. I found that at the center of the grip, the Kestrel was 0.3 inches smaller than the PDP Commander. At the base of the frame, the Kestrel was 0.2 inches smaller. Knowing that some of this was due to the PDP Commander having thicker grips, I broke out the calipers and measured the frame of both pistols between their frontstraps and backstraps at the base of the grip safeties. I found that the Kestrel was smaller by 0.1 inches. While this does not sound like much, when combined with the thin stocks, the difference is noticeable, especially to shooters with smaller hands.

On the range, I tested the Kestrel with three premium self-defense loads and one FMJ ball load. Gorilla’s Silverback FBI load features a 230-grain solid-copper hollow point (SCHP) that provides tremendous expansion. This load is designed to meet the penetration requirements of the FBI’s protocol. It was also the softest-shooting load, averaging 756 fps and producing a 1.3-inch group at 25 yards.

Sig Sauer recently joined the ammunition market, and its V-Crown JHP line represents the company’s signature duty and personal-defense rounds. For this test I used Sig’s 200-grain V-Crown JHPs, which averaged 840 fps and produced a group that measured 1.50 inches.

I used Aguila’s 230-grain FMJs to break the Nighthawk pistol in. However, I wanted to see how this load stacked up against the personal-defense loads, and I was surprised when the Aguila load averaged 757 fps with an extreme spread of only 25 fps. This consistency allowed me to shoot a 1.25-inch group at 25 yards.

Just prior to receiving the Nighthawk Kestrel, I saw a press release announcing that Super Vel was back in business. I reached out and was expedited a sample of its ammunition for this article. Space does not allow me to cover the story of Lee Juris and how, in the mid-1960s, Super Vel changed the rules when it came to personal-defense and duty ammo. However, as with the original load, this newest Super Vel load features a 185-grain JHP that averaged a screaming 1,121 fps. Even so, the Super Vel round produced a 1.5-inch group at 25 yards.

I shot a modified “10-10-10” drill at the very end of the range day. For those who are not aware of this drill, it is one of Ken Hackathorn’s signature training drills. It is shot from the 10-yard line using a 25-yard NRA Bullseye target. Starting from a low-ready position, the shooter is required to shoot 10 rounds in 10 seconds. It is the perfect drill to test both speed and accuracy. Since I was loaded with only eight rounds, I dropped my time to eight seconds. This is a drill that, while on the surface seems very easy, can really ruin your day if you aren’t prepared. My best score with the Nighthawk Kestrel a 92 out of 100. I was pretty pleased with this, especially since I was having to adjust to the thinner grip panels and frame, 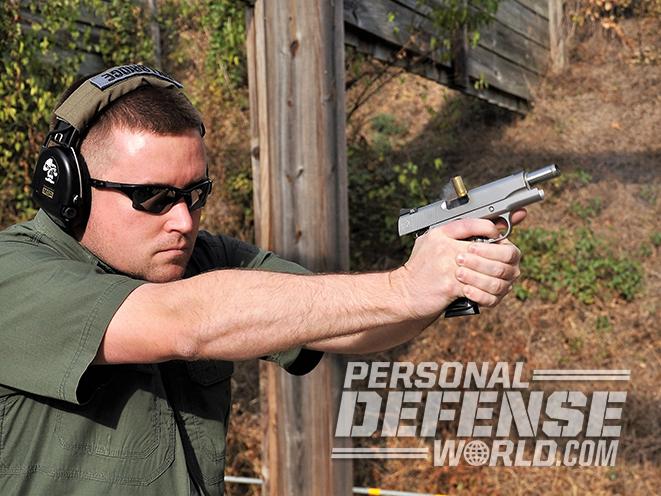 On several occasions, I carried the Kestrel in either an older Milt Spark’s Summer Special or a 55BH rig. The Kestrel was extremely comfortable, and I appreciated the contoured thumb safety and nicely rounded beavertail.

As with all of my evaluations, I attempt to share the pistol with my closest shooting friends to get their feedback. To a person, they were impressed with the fit and finish of the Kestrel. If I were to purchase a Kestrel, I’m not sure I would retain the Alumagrips. I found that under speed, the pistol would torque slightly. This could probably be corrected with a better purchase and more range time. That is an easy fix, if needed, and the only negative I could find with the pistol. It was 100-percent reliable with all four loads as well as an assortment of other miscellaneous rounds that I had taken out of carry rotation over the last year.

Nighthawk has another winner on its hands. To quote the company’s website, “It fits your hand like Dad’s old hammer and carries like Grandpa’s pocketknife.” I could not have said it better myself.

For more information on the Nighthawk Kestrel and the complete line of Nighthawk Custom pistols, visit nighthawkcustom.com.