We’re not professional criminals here at PersonalDefenseWorld, but it seems to us if you’re going to commit a robbery, a gun store would be pretty low on the list of places you’d want to target. But a boneheaded bad guy in Brooklyn, N.Y. did just that, and—surprise, surprise—was greeted by an armed gun store owner who opened fire on him.

It all started when a man walked into DF Brothers Sports Center in Brooklyn’s Bensonhurst neighborhood at around 10:45 a.m. and asked to see some firearms on display. When the owner—60-year-old Frank Taormina—asked to see his gun permit, the man pulled out some pepper spray and sprayed him in the face.

The suspect then pulled out a sledgehammer and smashed a display case. Surveillance footage showed him grabbing two revolvers from the broken case.

That’s when Taormina pulled out a 9mm Glock handgun and fired two rounds at the man, who dropped the revolvers, took off from the scene and left a trail of blood in his wake. It’s unclear if he was shot or suffered cuts from the shattered glass of the display case.

Taormina was treated for pepper spray exposure but remained otherwise unharmed as a result of the incident. He won’t face any charges for his actions, since he was defending himself and his store, and his permit was in order, police said.

Under New York state law, store owners are allowed to have a firearm on the premises as long as the gun is legally purchased, never removed from the shop and the store owner has the proper city licenses.

DF Brothers Sports Center—which also has a range on the premises—is noted as being one of the few remaining firearms dealers in New York City.

The suspect, meanwhile, remains at large. He’s described as either white or hispanic and is seen in the surveillance footage wearing a black cap, black T-shirt, khaki pants and sunglasses. Police have been checking area hospitals to see if anybody came in with a gunshot wound, to no avail, CBS New York reported. 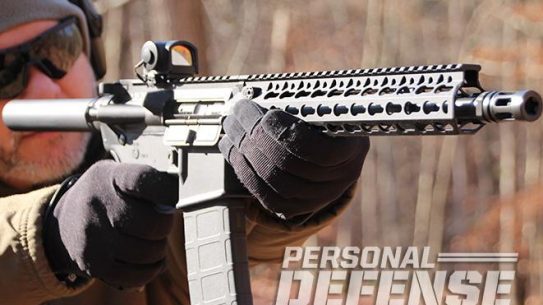