A 17-year-old girl in Spokane County, Wash. used her father’s gun to scare off a home intruder on the run from police earlier this week.

The incident began at around 5 a.m. on Monday when Spokane County Sheriff’s deputies spotted a car that had been reported stolen in the Wandermere area. When they attempted to pull it over, the car sped off. The driver eventually ditched the vehicle and took off on foot.

Deputies then set up a perimeter to apprehend the suspect, and news station KHQ issued an alert on its morning show that a bad guy was on the loose in the area. Watching that broadcast was 17-year-old Kimber Wood’s boyfriend, who contacted her to let her know a wanted man was on the run from police in the neighborhood.

On his way to work, Kimber’s boyfriend happened upon some deputies, who told him what they knew about the situation. He called Kimber to relay that information, and Kimber then called her father—who was at work—to ask if she could use one of his guns for self defense. Her father said that she could.

Kimber grabbed the gun, put it under her pillow and went back to sleep. A little while later, she was awoken by the sound of her screen door opening.

“I heard it close and that just doesn’t happen. I knew something was wrong,” Kimber told KHQ.

Kimber grabbed the gun and hid behind the makeup vanity in her bedroom. She then called her father, who taught her everything she knows about guns.

That’s when the bad guy entered her bedroom. Fortunately, Kimber was prepared.

“He popped in and I said, ‘Who the [expletive] are you?'” Kimber said. “His head was right there and I had the gun straight in his face and he ran.”

Kimber—gun in hand—followed the suspect as he run out the same screen door he entered through.

“I knew I wanted to be as close to him as I could, and your hands are shaking, but you know you have to have steady aim,” she said.

Kimber squeezed the trigger and fired a round into the ground. She told reporters she didn’t aim to hit him, she just wanted to scare him off.

“I fired a shot at him because I didn’t want him back,” she said.

The home intruder stole one of the family’s ATVs and took off.

Spokane County Sheriff’s deputies, and Kimber’s parents, arrived at the very remote home shortly thereafter. All parties were impressed that Kimber protected herself against the fugitive.

“When I found out a 17-year-old defended herself I thought that’s fantastic,” one deputy told KHQ.

Kimber’s father praised her ability with a firearm.

“That is something you teach the kids,” he said. “Lessons we went over and over, and you think they’ll never have to use them, and today proved that they did, and it worked.”

The bad guy, meanwhile, is still on the run, though he’s since been identified by police. 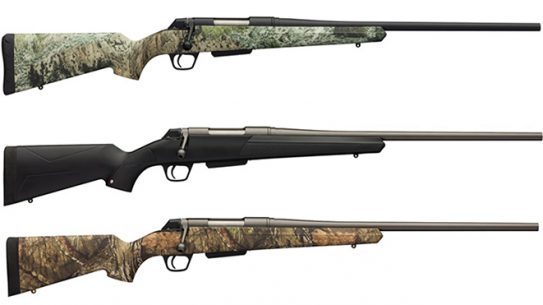