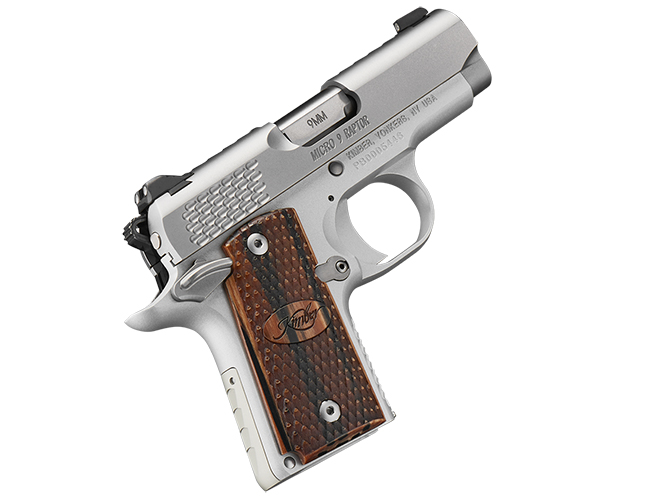 1 of 9
Kimber Micro 9 Stainless Raptor
Designed as a premium concealed-carry pistol, the new Micro 9 Stainless Raptor is a 9mm handgun that builds on the success of the original Micro 9. It is a scaled-down 1911 that blends attractive aesthetics with the features that many people want in a defensive pistol. The Stainless Raptor has a KimPro silver finish on its aluminum frame and a satin stainless finish on the slide. The zebrawood grips contrast the frame nicely, and their scale pattern helps to provide a firm grip on the gun. </br>Keeping things small enough to conceal easily, the gun has a 3.15-inch barrel and thin frame. It still holds 6+1 rounds but weighs less than 16 ounces unloaded. With three-dot night sights, its suggested retail price is still less than $900, making it both beautiful and affordable for many people. 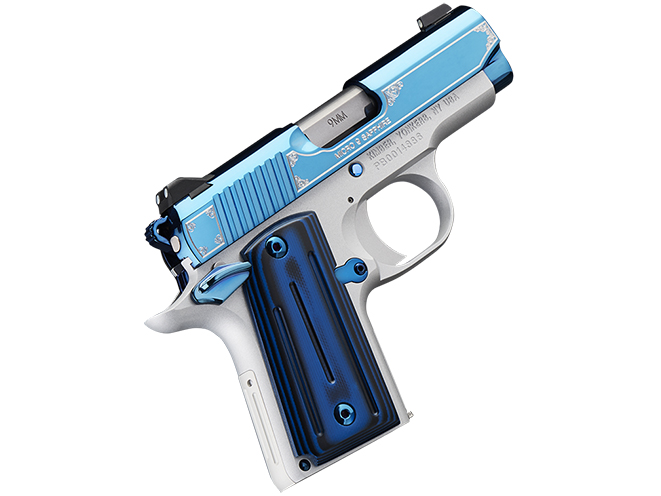 2 of 9
Kimber Micro 9 Sapphire
Not only does Kimber make amazing fighting handguns, but the company also makes some that are truly stunning. Take, for example, the new Micro 9 Sapphire. This is a pistol that has all of the functionality of the original Micro 9 but with the added visual details to make this a gun you might like to show off at the next barbecue.</br> The stainless steel slide has a blue PVD (particle vapor deposition) finish that is said to offer high resistance to corrosion and marring. It can also provide a brilliant finish like the one seen on this Kimber. Matching the slide, the company also used the blue PVD process on the ambidextrous thumb safety, hammer and magazine release.</br> The metal parts aren’t the only pieces to get a custom look. Kimber also uses G10 laminate grips with a blue and black finish. The grip panels have ball-mill work for a clean look. They are held to the gun frame by grip screws with the same blue PVD finish. 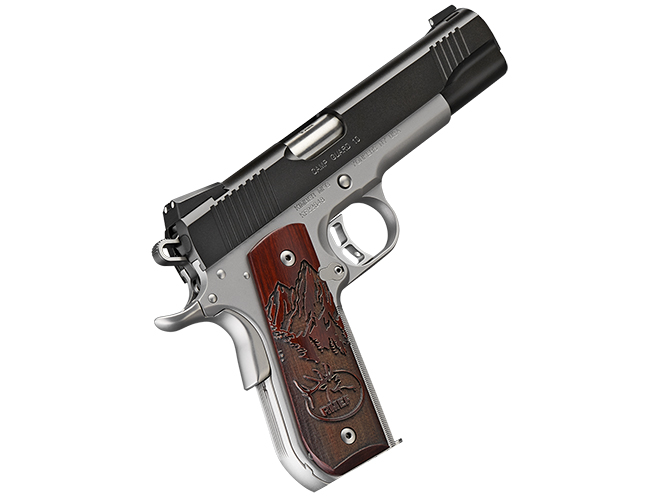 3 of 9
Kimber Camp Guard 10
Few modern cartridges have generated a following quite like the 10mm. Often likened to the .41 Magnum, the cartridge is seen as suitable for both self-defense and hunting. I suppose it makes sense then for Kimber to work with the Rocky Mountain Elk Foundation (RMEF) on a 10mm 1911-style pistol that can provide security at home or in the woods.</br> Called the Camp Guard 10, Kimber designed the gun to be comfortable to carry into the backcountry. The gun features a round-heel frame for improved concealability while the 38-ounce weight offers a good balance between shooting and toting comfort.</br> But don’t think that this gun is designed with an excessive bias toward concealment. It is a full-sized pistol with a 5-inch barrel and an 8+1 capacity. Most people should find the three-dot Tactical Wedge sights easy to use. The nearly 7-inch sight radius will help to ensure precise shooting at longer ranges.</br> For protection from the elements, Kimber applies its black KimPro II finish to the slide. The frame has a satin silver finish for a two-tone effect. Rounding out the classic styling of this gun are the rosewood grips with the RMEF logo. 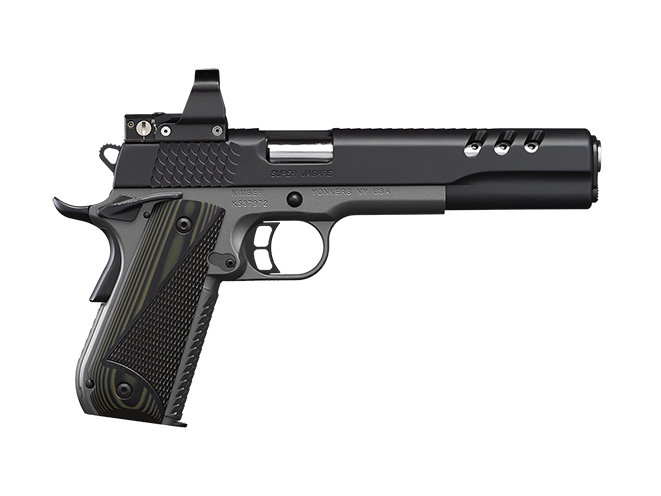 4 of 9
Kimber Super Jägare
The Super Jägare is a serious pistol. Built around the 10mm cartridge, this 1911-style pistol is designed for close-range hunting of small-to medium-sized game and varmints. </br>Eschewing standard sights, Kimber selected the highly respected Leupold DeltaPoint Pro as the aiming tool for this gun. The DeltaPoint Pro is a lightweight red-dot optic that is built for nearly any rugged hunting condition. And you don’t need to worry about the rain and snow, as this optic is submersible beyond 30 feet.</br> Of course, the gun is just as durable as the sight it uses. Kimber elected to use a diamond-like carbon (DLC) coating on the slide for extreme abrasion and corrosion resistance. The frame has a lighter charcoal gray KimPro II finish that is extremely durable in its own right. The Micarta grips look great and will provide a lifetime of regular use.</br> Kimber uses a 6-inch barrel on the Super Jägare to wring as much velocity out of the ammunition as possible. The magazines hold eight rounds. The company also applied its “carry melt” treatment to the pistol and used a round-heel frame. 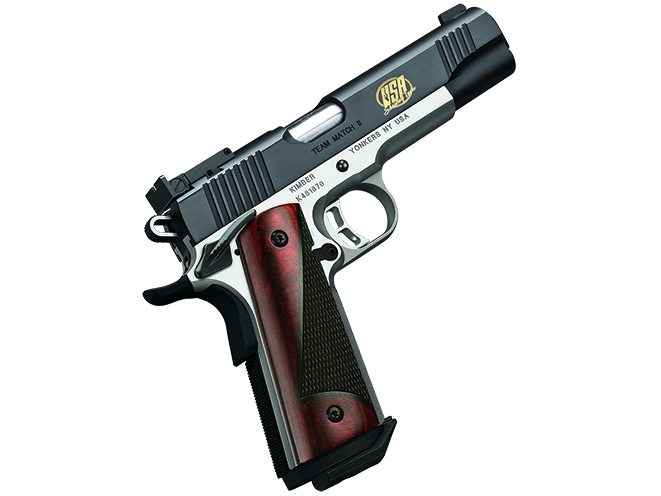 5 of 9
Kimber Team Match II
It may not make you an Olympic shooter, but it can help someone else become one. The new Team Match II is a pistol that promotes the USA Shooting Rapid Fire Pistol Team’s training for the Olympics. No other gun manufacturer has donated more to the team, so it makes perfect sense that Kimber would be the company to offer this commemorative handgun. The matte black slide has a 24-karat gold USA Shooting logo emblazoned forward of the ejection port. The black finish contrasts nicely with the satin silver frame and laminated rosewood grips. The slide has forward serrations. Of course, this gun is made for shooting. It is available in both 9mm and .45 ACP with nine- and eight-round magazines, respectively. The gun has an extended magazine well and an extended, ambidextrous thumb safety. Kimber also designed this pistol with a match-grade aluminum trigger with a pull weight between 4 and 5 pounds. 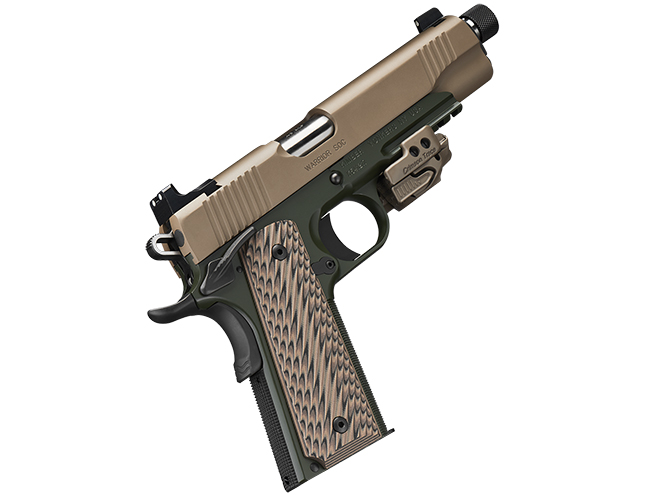 6 of 9
Kimber Warrior SOC (TFS)
One of Kimber’s top tactical pistols is the Warrior SOC (TFS). Although it might not be immediately apparent, SOC (TFS) is quite descriptive of this handgun as it stands for “Special Operations Capable, Threaded For Suppression.” The features of this gun lend themselves to what many people might think would be an “operator” pistol. This gun is ready for use with a sound suppressor. Not only is the 5.5-inch barrel threaded for a can, but Kimber also uses tall night sights that allow for aimed fire over the top of a suppressor. Kimber also equips the gun with a Crimson Trace Rail Master red aiming laser. This allows you to accurately aim the gun from unusual shooting positions, such as from the ground or around a ballistic shield. The gun also looks the part of a special operations warrior. It has a KimPro II two-tone finish of Dark Earth and dark green. Kimber also uses G10 laminate grips that match the gun’s coloring. Inside, Kimber opted for a match-grade barrel, bushing and trigger to give the gun the muscle to back its looks. 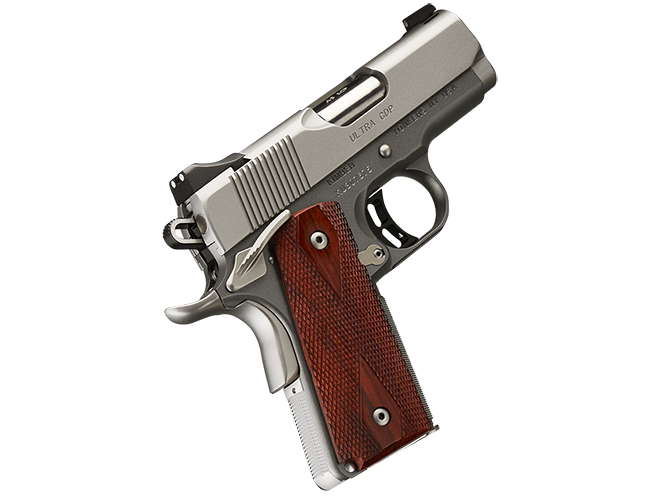 7 of 9
Kimber Ultra+ CDP
If you like to carry a compact 1911 but want a full 7+1 rounds of .45 ACP, you might be interested in the new Ultra+ CDP. Kimber obviously built this gun for concealed carry, and with the included Custom Defense Package, the gun has a lot of features people are looking for when carrying concealed. The barrel is chopped down to 3 inches to provide a package that is fairly short overall—less than 7 inches. Unloaded, the gun weighs about 27 ounces. Kimber treats the gun to a “carry melt” process to round off corners for comfortable carry. The front- and backstraps are checkered to help provide a solid hand-to-gun lock. The rosewood grips are fully checked to further enhance the grip. Finally, Kimber chose three-dot tritium sights for this pistol to ensure you can still aim in low light. 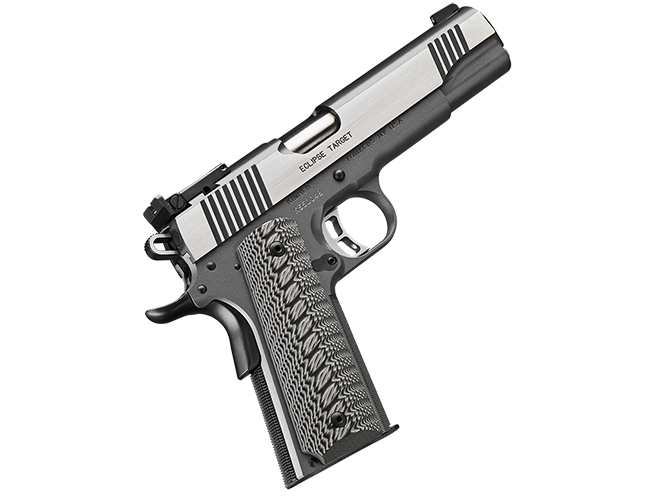 8 of 9
Kimber Eclipse Target
It is tough to beat the looks of the Eclipse Target. This 5-inch-barreled 1911 has a brush charcoal gray slide with dark serrations that are visually striking. With G10 Cyclone grips finished in black and gray, the gun has a very elegant appearance. Of course, this gun is more than just a pretty toy. It is chambered in two popular competition calibers: the .45 ACP and .38 Super. Both calibers use eight-round magazines. On top, Kimber fitted the slide with its own adjustable sights. These sights use a tritium dot up front with a bar in back to provide a crisp sight picture. The 6.8-inch sight radius helps to increase precision over guns with a shorter radius. Kimber uses a stainless steel barrel with a match-grade bushing in the Eclipse Target. The premium aluminum trigger is set at the factory with a pull weight between 4 and 5 pounds. 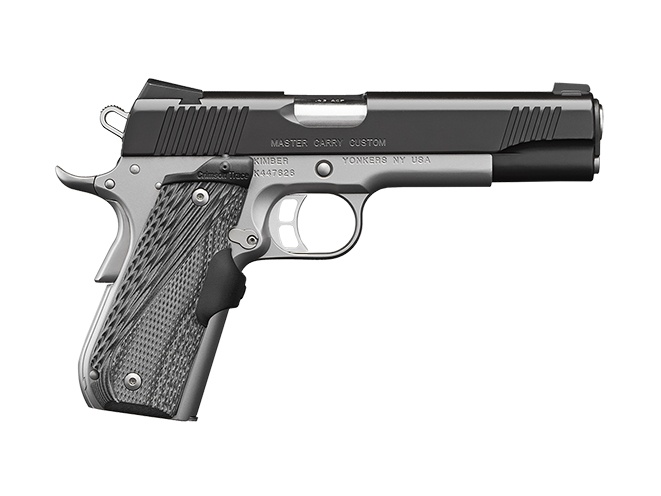 9 of 9
Kimber Master Carry Pro
Kimber’s popular Master Carry Pro is now available in 9mm. While the .45 ACP cartridge has been, and will always be, the most popular choice in the 1911-style pistol, the 9mm also has its share of the market. With the 9mm version of the Master Carry Pro, you get the same great features the original gun offered. For sighting purposes, Kimber includes both a set of night sights and a supplemental aiming laser. The traditional sights are low-profile Tactical Wedge models with tritium inserts. A set of Master Series Lasergrips from Crimson Trace offers a red aiming laser combined with attractive G10 laminate grip panels. This 4-inch-barreled gun has a lightweight aluminum frame with a round heel to help reduce printing when carried concealed. The frame has a satin silver finish matched to a matte black KimPro II finish on the slide. 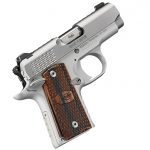 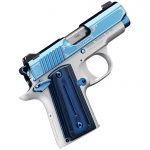 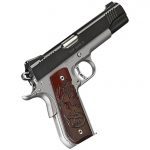 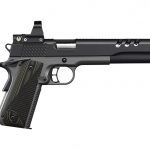 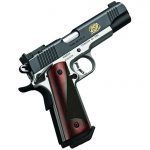 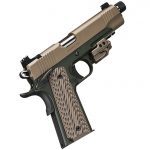 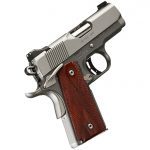 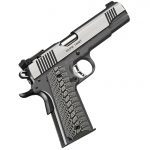 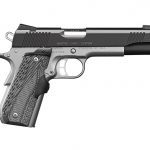 When you talk about modern 1911-style pistols, no conversation is complete without discussing Kimber. Kimber is one of the top names in providing modern interpretations of John Moses Browning’s original design. From the U.S. Marine Corps to the Los Angeles Police Department SWAT team, there are a number of top-notch Kimber 1911 pistols for those that choose to carry cocked and locked.

As a company, Kimber does not rest on its prior success. For 2017, the company introduced a large number of new 1911 pistols. In fact, there are so many new Kimber 1911 pistols, I don’t have enough space to discuss them all. Instead, I will cover the highlights here and encourage you to visit kimberamerica.com to peruse the rest of the Kimber 1911 offerings.

This article was originally published in “America’s Handgun Model 1911” 2017. To order a copy, visit outdoorgroupstore.com. 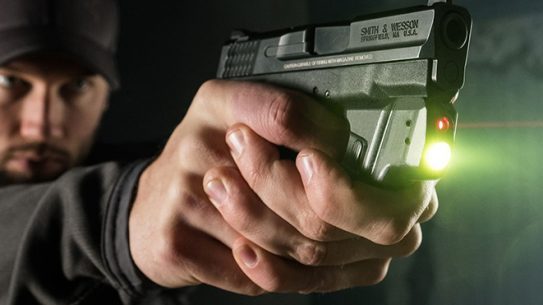 Crosman has set its sights on LaserMax, announcing it has acquired the laser systems...