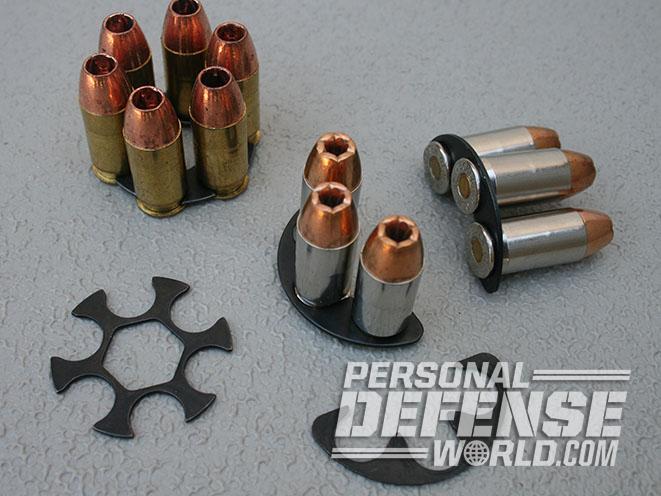 1 of 7
Moon Clips
A number of companies offer both half- and full-moon clips so you can quickly reload your trusted rimless-cartridge-firing revolver in a hurry. 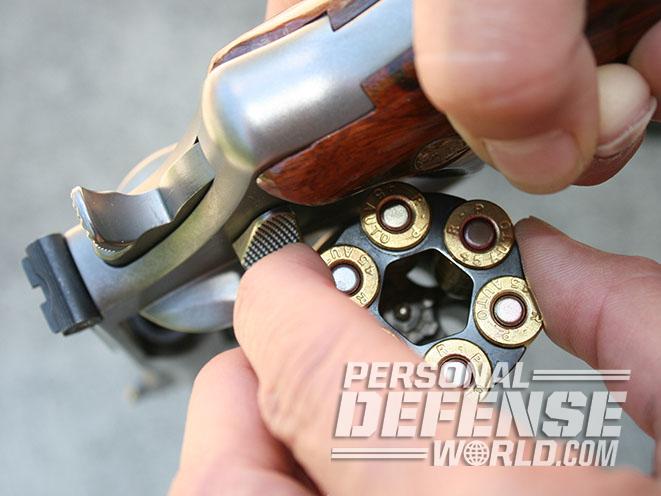 2 of 7
Moon Clips
Topping off your revolver with a moon clip is faster than with a speedloader, as you don’t need to release the cartridges and remove the moon clip before firing. 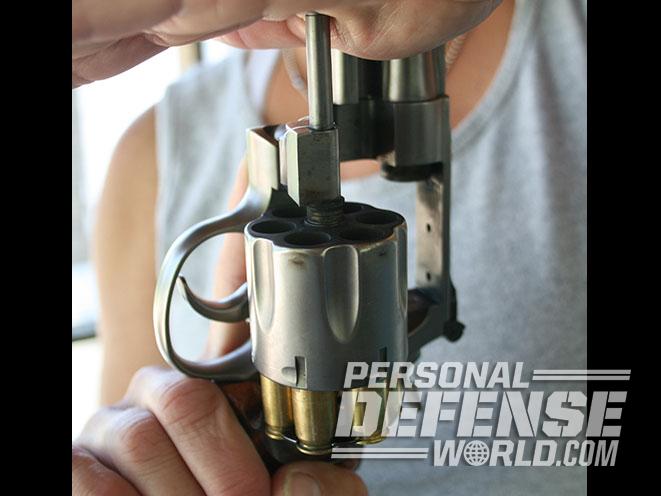 3 of 7
Moon Clips
Spent cases are held captive by the moon clip and are simultaneously ejected, which can be a pro or con depending on your situation. 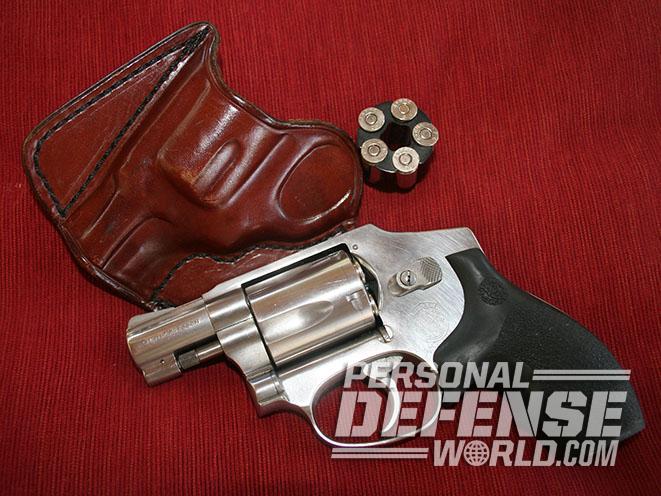 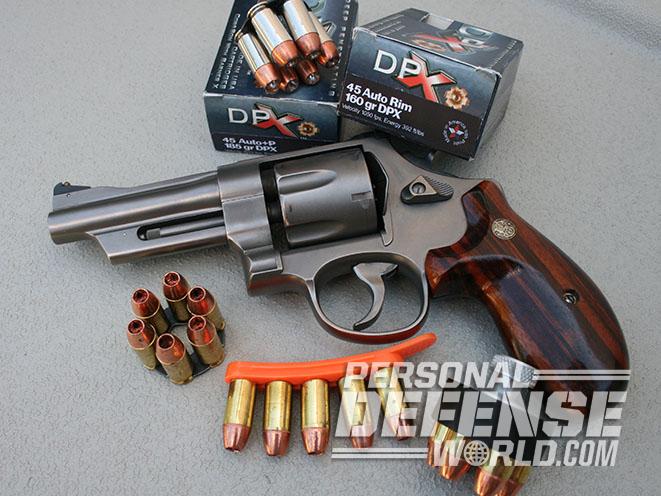 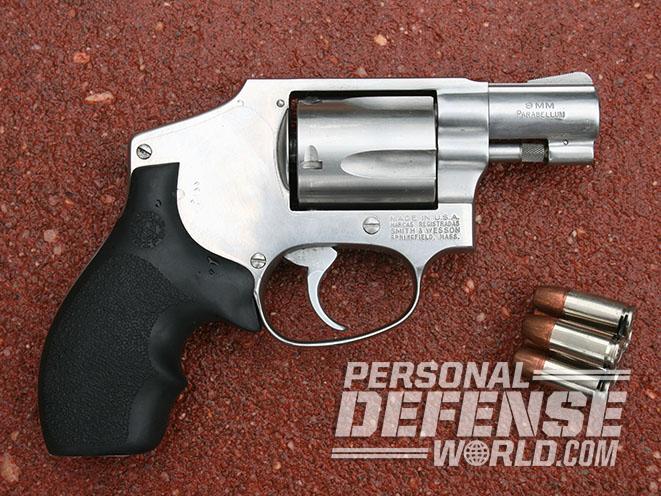 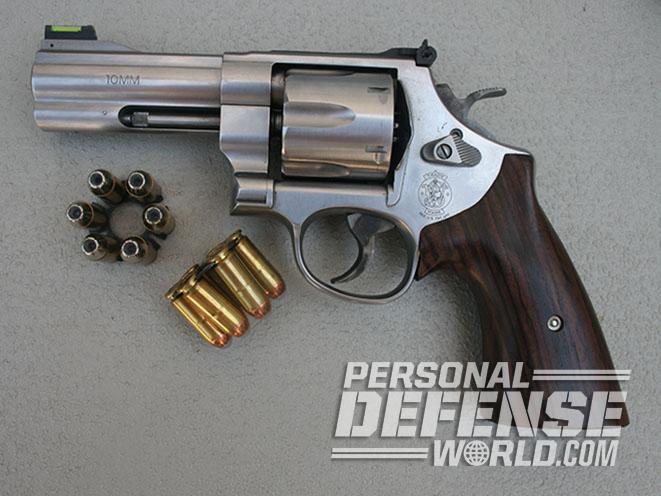 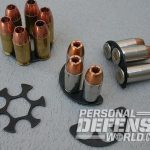 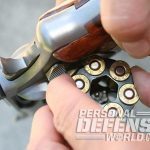 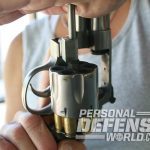 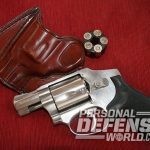 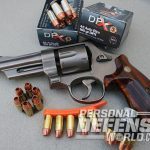 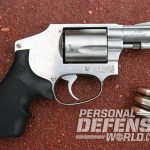 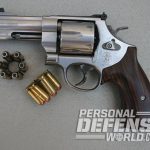 When the United States entered World War I, the military quickly discovered that its inventory of small arms was woefully inadequate for a prolonged conflict. The Model 1911 pistol had been introduced a few years earlier, but sufficient numbers could not be manufactured quickly enough to satisfy the war effort. To meet the increased demand for military handguns, Colt and Smith & Wesson both stepped up to manufactured large-frame revolvers in .45 ACP for our troops.

There was, however, one issue that had to be addressed before the Colt New Service and S&W 1917 could be pressed into service. Up until this point in time, double-action (DA) revolvers were designed to function with rimmed cartridges such as the .38 Special or .45 Colt. The rimless .45 ACP was not compatible with the extractor system of the revolver, so some outside-the-box thinking was employed to come up with a fix. The solution was the moon clip, which held the .45 ACP cartridges captive for easy insertion and extraction from a typical revolver cylinder.

Moon clips might best be described as a circular piece of thin spring steel designed to hold cartridges captive by their base. The first examples were “half-moon” clips that held three cartridges. A pair of “half-moons” quickly brought a six-shot revolver up to full complement. Many years later, “full-moon” clips holding six or more cartridges were introduced to make loading and extraction even more efficient.

After WWI wrapped up, the raison d’etre of the moon clip was pretty much on the rocks. Smith & Wesson continued to turn out large-frame revolvers in .45 ACP, but these big bores were never a hot ticket. By the l930s, action shooters discovered the advantage of moon clips and suddenly everything old was new again. In games of speed, one could top off a revolver fed by a moon clip faster than with a speedloader.

Over the years, Colt, Ruger, Smith & Wesson and, more recently, Charter Arms and Chiappa have offered revolvers that utilized moon clips for reloading. The vast majority of these guns were designed around autopistol cartridges such as the 9mm and .45 ACP, although Smith & Wesson has offered examples chambered for rimmed cartridges. I currently own a trio of S&W revolvers chambered for autopistol cartridges, including a 9mm Model 940, a 10mm Model 610 and a .45 ACP Model 625. While some shooters might opt to use a revolver set up for moon clips to give them an edge in competition, I had a different mission in mind.

So what makes a moon-clip-fed revolver so special? Unlike a speedloader, a moon clip stays affixed to the cartridges throughout the firing cycle. One simply inserts the clip containing captive cartridges into the gun, closes the cylinder and gets back into action. With a speedloader, there is an extra stop involved, so you have to release the cartridge. This, of course, takes a second or two longer. As an example, I would offer a comparison between my S&W Model 649 Bodyguard in .38 Special and S&W Model 940 Centennial in 9mm. Elapsed times from the last shot of the first cylinder to the first shot of the second cylinder after reloading are significantly shorter with the moon-clip-fed 9mm. And I’m a left-handed guy with my arms on backwards. A right-handed shooter may enjoy an even bigger advantage.

Many of the concepts we now embrace in defensive shooting had their genesis in the competition world. Might moon clips be another example? I think so. Clearly, a moon-clip-loaded revolver offers a tangible advantage should one have to reload in a hurry. In a match, a slow reload can push you down in the standings. If you find yourself in a fight for your life, however, an inability to quickly top off could have far greater consequences.

Another favorite revolver of mine is a limited-production S&W Model 610. S&W has made a couple of different runs on this N-Frame blaster chambered for the much unappreciated 10mm Auto cartridge, and I wouldn’t be too surprised to see it offered again. As an additional bonus, the Model 610 will also chamber and fire the much more popular .40 S&W. Shorter .40 S&W cartridges are just a tad faster to reload than 10mms. When loaded with full-power 10mm cartridges, the Model 610 will outperform the highly regarded .357 Magnum, yet is still very controllable in fast DA shooting.

Is there a downside to using moon clips? Perhaps. Unless one is going with half-moon clips, reloading is an all-or-nothing proposition. You simply cannot perform a tactical reload by plucking out spent rounds and replacing them with fresh cartridges. In reality, however, I can replace five or six rounds with a moon clip faster than I can tactically load two or three rimmed cases.

If you opt for a .45 ACP revolver, you can have your cake and eat it, too. CorBon, Buffalo Bore and DoubleTap currently market high-performance .45 Auto Rim cartridges that do not require moon clips. Simply load up with .45 Auto Rims and have extra rounds for a tactical reload in a speed strip. Moon clips containing .45 ACPs could be held in reserve should you want to perform a speed reload. I will submit that this is a pretty wild idea, but somebody has been buying up all those lightweight, scandium-frame .45 ACP revolvers.

Carrying spare moon clips for defensive applications can be a challenge. Several firms market moon-clip holders, but by and large, they are designed for competitive shooters where stealth is not an issue. I came up with a single clip holder for my 9mm Model 940 that holds the clip flat against the belt. I’ve also had some success stacking a pair of moon clips in a Galco speedloader pouch. Blade-Tech offers an excellent solution. The company’s Double Moon Clip Pouch is probably your best solution for discreet carry. Tools that help you strip spent cases from moon clips are also available from Dillon Precision.

Clearly, running a round gun in a square-gun world puts you out of step with most defensive-minded shooters. But there are many folks out there who prefer the revolver to the autopistol. Revolvers continue to offer a few advantages over self-loading pistols, particularly for the infrequent shooter. So, if revolvers are your game, check out the moon clip advantage. Without question, the advantages moon clips offer are not limited to the competition world.

This article was originally published in “Combat Handguns” July/August 2017. To order a copy, visit outdoorgroupstore.com. 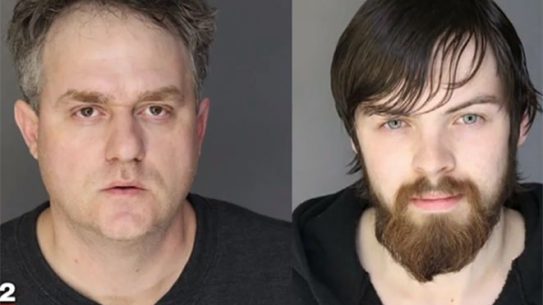 A pair of Michigan open carry advocates who brandished firearms inside a police station...