A bunch of “little punks” had the misfortune of stealing from former UFC champion Ronda Rousey. Shockingly, it didn’t end well for them.

During an interview on “Live with Kelly and Ryan,” the 30-year-old MMA fighter and Olympic bronze medalist in judo said she and her fiancé, UFC fighter Travis Browne, were on their way to the airport for a trip to New Zealand when they decided to stop by their house first. When they got there, they noticed several valuables were missing.

“Right when we got to the house we realized we were robbed,” Rousey said. “Someone had been squatting in my house for like three days, sleeping in my bed. Stole my Olympic ring, stole my guns, all my precious jewelry, every headphone in the house, credit cards.”

Fortunately, Rousey has a security system in place at her house. She and Browne pulled up the footage and were able to get a look at the bad guys.

“We have security cameras so we looked back at them and we saw that they were a bunch of kids with skateboards and there’s a famous skate park right across the street cause we’re in Venice,” Rousey said. “So my man’s six-seven, like 260 [pounds], he like beelines it straight to the skateboard park, finds the guys right away.”

Luckily for the thieves, Browne didn’t physically engage with them. We have a feeling that would have ended very badly for all parties involved.

“He’s smart enough not to [hit them], we’ll get sued pretty hard, but he found the police right then and they caught them,” Rousey said.

Rousey didn’t say if her valuables were returned, but she said her house was deliberately targeted.

“They knew it was my house. There’s no way you can’t not know it’s my house. What little punks,” Rousey said.

If Rousey had her druthers, she would have taken care of the thieves her own way.

“I wish five minutes with me was a sentence, but I think that would go into cruel and unusual punishment,” she said. 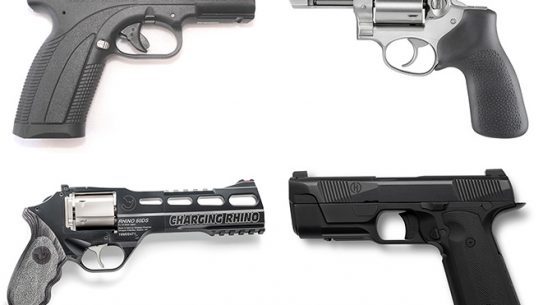 26 New Pistols & Revolvers Coming to a Holster Near You

A look at 26 cutting-edge new pistols and wheelguns from Sig Sauer, Ruger, Smith...