by Jay Langston
in Guns, Rifles
0

Polish engineers escaping to England during World War II designed some of the earliest semi-auto bullpups to follow-up on a French design from the mid-1930s. The checklist for the earliest bullpup designs sought to replace service pistols, submachine guns and rifles with a weapon that packed rifle-like velocities into a compact package. This blended-function design is found in another new bullpup design by JARD, Inc.

Well known for its AR-15 triggers, JARD ventured into the gun-building business a few years ago. Several AR-related designs fill the company’s catalog, but the J67 takes a detour. The J67 is a 9mm bullpup that accepts Glock magazines. This attribute makes it a notable pistol companion to the Glock-toting pistol horde among the firearms crowd.

Since most firearm designs build upon or borrow from earlier ideas, it’s not surprising that JARD incorporated a proven component into its J67. Several semi-auto firearms manufacturers use proven pistol magazines in their weapon designs, since one of the most challenging aspects of creating a new semi-
automatic weapon is reliable magazine design. Among the most reliable 9mm pistol magazines are those made by Glock, and JARD followed in the steps of several other manufacturers by incorporating them into the J67.

Simplicity of design comes to mind when examining the J67. It starts with a laser-cut and stamped aluminum receiver with efficient squared lines. The lower receiver houses the magazine well, an ergonomic pistol grip and the trigger mechanism, which incorporates a long transfer bar. Surprising for a bullpup, the trigger pull offers a smooth, consistent 5-pound pull. Toward the rear of the lower receiver are quick-detach (QD) sling swivel mounts on the port and starboard sides. The buttplate is attached to the lower receiver.

The J67’s safety is located in the front of the triggerguard, like that of an M1 Garand. The magazine release is just in front of the magazine well, and the ejection port is immediately behind it.

The upper receiver is an octagonal, stamped-steel tube that houses the blowback-operated bolt, barrel and requisite recoil spring assembly. Charging handles protrude from both sides of the receiver, making it ambidextrous. The forward portion of the upper receiver’s sides and bottom incorporate M-LOK-compatible slots. A foregrip is installed for ease of use.

The barrel measures 16.75 inches, giving the J67 a total overall length of 26.13 inches. A Picatinny rail rides on top of the upper receiver to mate your preferred optic or sights. The test rifle was upgraded at the factory with 1/2×29-tpi muzzle threading, and it came equipped with a muzzle brake. The primary reason for ordering a threaded barrel was to make it easier to mount a sound suppressor. 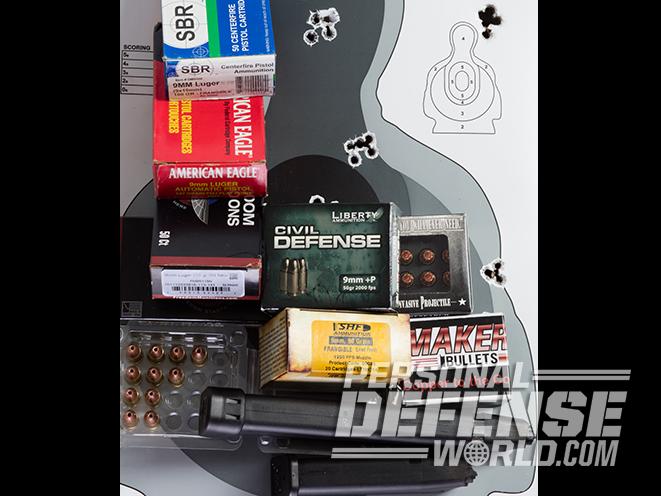 Putting the J67 through its paces, I fired more than 400 rounds of random 9mm ammo ranging from factory 115- to 135-grainers and an assortment of cast-bullet handloads. This is a fun gun to shoot, so I spent a couple of hours loading magazines and plinking steel. The J67 also functioned fairly reliably, with failure to feeds coming after 300 rounds without cleaning. Contributing to the fouling was the fact that an AAC Ti-RANT suppressor was screwed onto the barrel for plinking and testing. Gas and powder residue gets blown back into the receiver, and it gums up the works much more quickly than a weapon without a suppressor.

After a break-in period of about 200 rounds, I disassembled the J67 and greased the recoil spring to reduce the action noise and friction. While I was at it, I applied a small dab of lube to the sear engagement in the fire control group. Typically, some grease on the sear helps with trigger pull smoothness, but I would later find that this was a mistake for this weapon. The lubed recoil spring produced the desired results, but the addition of lube to the sear engagement produced some undesired results. After putting 200 more rounds downrange on reactive targets, I switched to specific factory loads for chronographing and accuracy testing. About halfway through the chronographing session, the J67 started malfunctioning. I disassembled the weapon and found that unburnt powder had lodged in the grease on the sear and prevented it from resetting properly. Once that was cleaned, the J67 returned to normal functioning.

I chose three factory loads and one handload for testing. An Oehler 35P was set up 15 feet from the muzzle to gather velocity data, and a target was stationed 25 yards from a rock-solid bench. I used a Trijicon 3X ACOG for all of the shooting, and I fired four 5-shot groups with each load.

If you’re faced with a dangerous situation where you have to “pie” a corner in your castle to find a bad guy, the JARD J67 would be a solid choice. The bullpup is fun to shoot and uses an economical round, meaning you’ll train with it a lot.

This article was originally published in “Tactical Weapons” May/June 2017. To order a copy, visit outdoorgroupstore.com.