Surveillance footage has surfaced showing a 61-year-old legally-armed grandfather shooting a 16-year-old armed robber at a gas station in Detroit over the weekend. Watch it above.

The incident began when Darius Summers, a motor city musician who had just recently obtained his pistol license, decided to head to the gas station near his home on the city’s west side on Sunday in order to grab some coffee.

“I’d never been through this,” Summers said. “Never shot a gun before. All this is new to me.”

Summers says he walked into the gas station, and the armed bad guy——it’s unknown if he was already in the store or if he walked in after Summers—saw that Summers was also armed and tried to take his firearm from him.

The video shows the armed suspect sticking his gun in Summers’ back and trying to turn him around.

The suspect continued to try and control the situation, but Summers was having none of it. He drew his firearm, quickly turned around and shot the would-be robber once in the stomach.

The teenager managed to pick up the gun that he dropped upon being shot, and limped his way out of the gas station. He didn’t get very far, and authorities arrested the suspect later identified as Xavier Futrell soon after.

During the confrontation, Summers tried to talk Futrell out of trying to rob him.

“I said, ‘Why you got to do this? This is unnecessary. [But] he just insisted that he wanted my gun, so I gave it to him,” Summers said.

Futrell has been charged with assault with intent to murder, carrying a weapon with unlawful intent and a felony firearms violation. 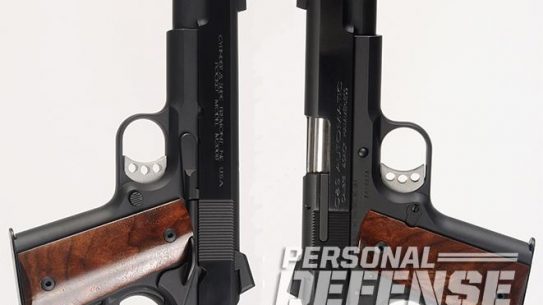 With its Pocket Model 2008, Cylinder & Slide has resurrected the legendary Colt Model...