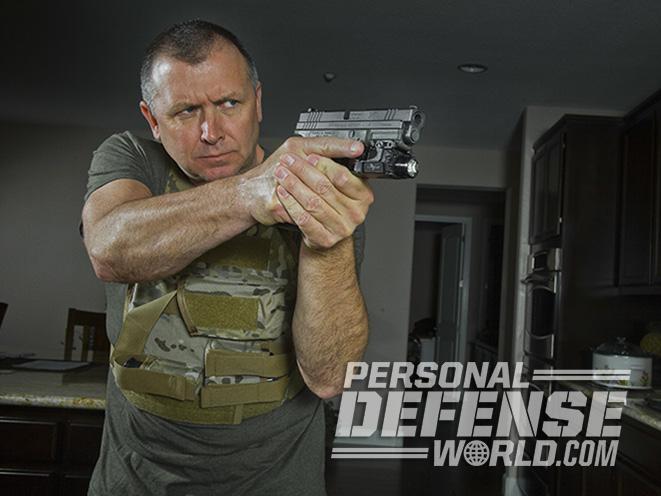 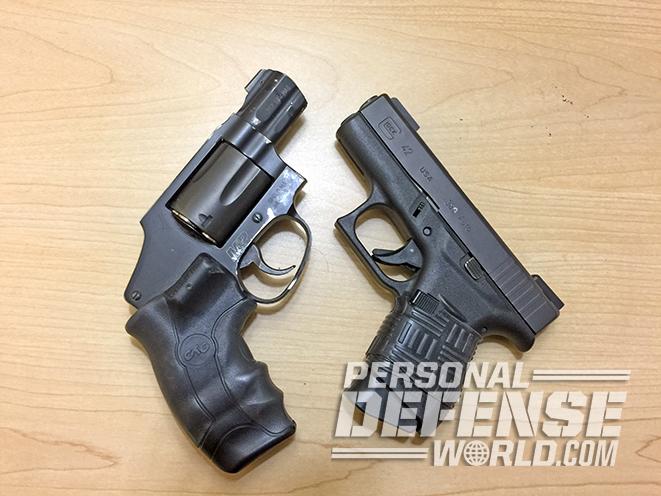 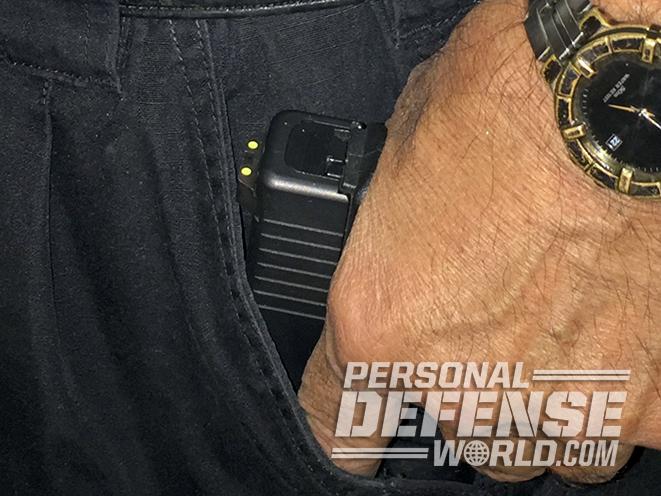 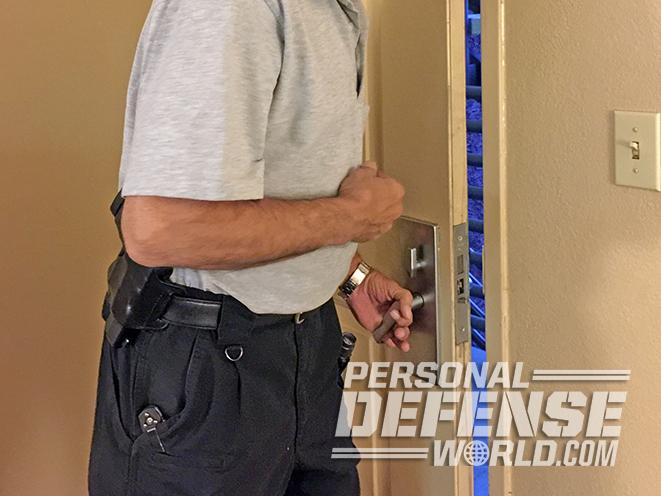 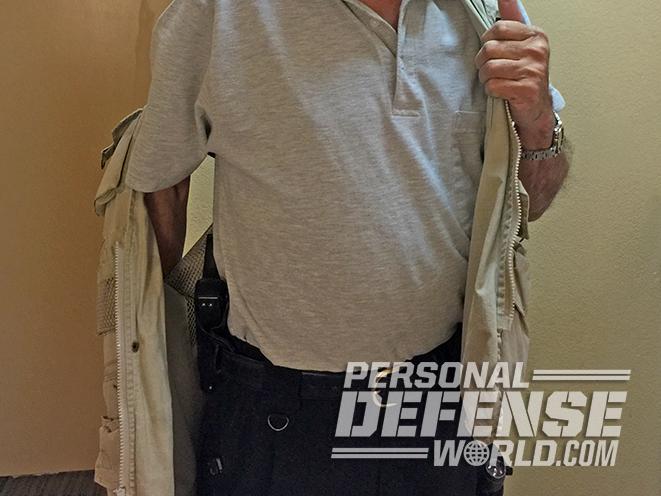 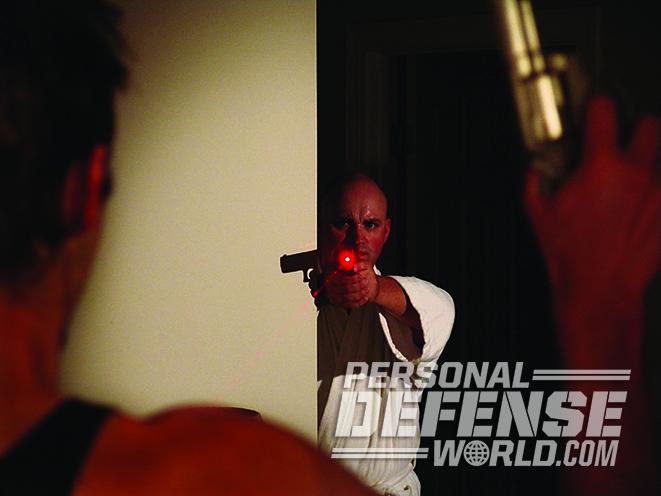 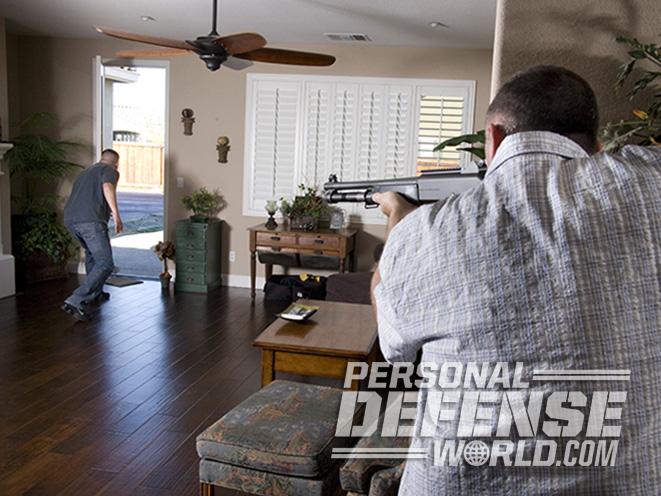 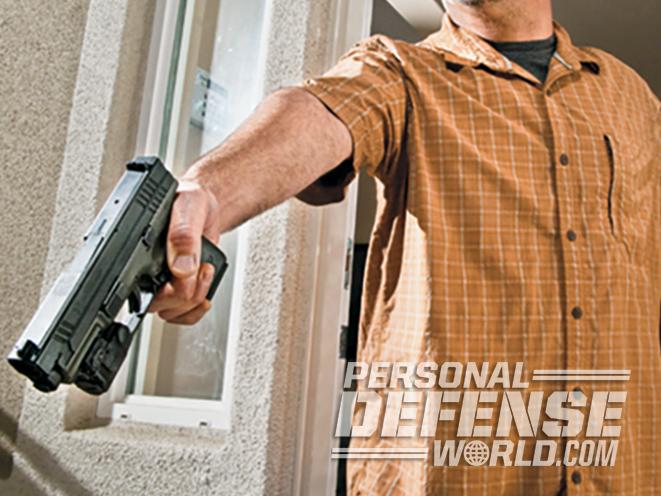 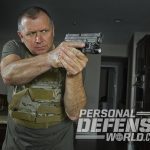 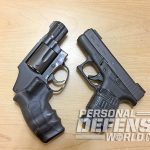 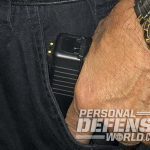 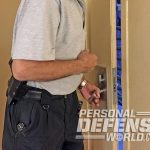 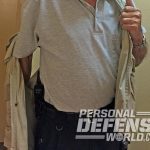 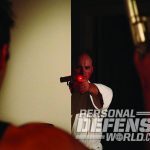 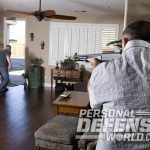 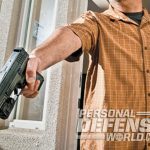 At some ungodly hour, you hear an unexpected knock on the door, or your doorbell rings. Do you go to that door and open it with a gun in hand? There several ways that this can go precipitously downhill. If the person at the door turns out to be harmless and has seen the gun, the elements are in place to sustain a charge of felony aggravated assault against the armed homeowner, who showed the gun and put the person on the other side in fear for their life. Let’s look at some examples.

Case One: Back when the Pentagon Papers scandal dominated the news, Washington Post publisher Katharine Graham told her famous editor Ben Bradlee that she wanted to publish said documents, and asked him to go through the courts to get them. That proved hard, and the time came when Bradlee assigned two reporters to ask Chief Justice of the Supreme Court Warren Burger whether his court would overturn a decision by a lower court of appeals that had favored the Post’s request. When they knocked on the door of his rural home at 11:30 at night, the chief justice met them at the door with a long-barreled revolver in his fist. The reporters left empty-handed.

Was the chief justice charged with aggravated assault? No, because no complaint was ever made. When Post reporter Harry Rosenfeld broke the story much later in his book From Kristallnacht to Watergate: Memoirs of a Newspaperman, he wrote, “It is not unusual for an eminent person such as Burger to answer the door carrying a gun. Bradlee decided that it wasn’t a story for the newspaper. It is likely Ben had in mind the overriding interests of the Post in winning the case in court and did not relish annoying the chief justice any more than we already had with our reporters’ nocturnal visit to his house.”

When you are chief justice of the Supreme Court of the United States and the potential victims desperately want to remain in your good graces, they may choose not to make a complaint, thus keeping you out of trouble. But neither you nor I are likely to have the advantage that Warren Burger did in Case One.

Case Two: In Chevy Chase, Maryland, a man inside his house heard someone outside at his swimming pool. Arming himself with a handgun, he went outside and found himself facing a teenager who had just climbed out of the pool. Stories diverged as to what happened next. The armed homeowner claimed the teen came at him despite an order to halt, and he fired a “warning shot.” The teen’s story was that the man walked out and wordlessly shot him. A .22 bullet had struck the unarmed trespasser in the wrist.

Charged in court for the incident (and for possession of a handgun not registered as required by Maryland law), the armed homeowner went to trial. He claimed that since the gun was a gift from his son—a former FBI agent not required to register his own handguns—he thought it was legal. The jury couldn’t decide, and after the mistrial the prosecutor decided not to charge the homeowner again.

The year was 1988, and the armed homeowner was Carl Rowan, a prominent Washington columnist and vehement anti-gunner who had repeatedly called for all handguns to be banned for everyone but the military and police. At the time, some pundits thought that this was a cross-racial shooting: Rowan was African-American and the wounded teen was Caucasian. Today, almost 30 years later, it’s entirely possible that a conviction would have resulted. How many of us think it would have gone better for Mr. Rowan, not to mention the wounded young man, if Rowan had simply called the police and not left the safety of his four walls at all?

Case Three occurred in 2012 when deputy sheriffs in Lake County, Florida, were searching for a man wanted in connection with a serious crime. They spotted the suspect’s motorcycle parked near the home of Andrew Scott and knocked on his door. Mr. Scott, apparently aware of a manhunt going on in his neighborhood, opened the door with a gun in his hand. The deputies perceived the gun to be pointed at them. They shot Mr. Scott to death in the doorway of his own home. It was not the first time something like that has happened, and it probably won’t be the last. The shooting was ruled justifiable. The officers had reasonably believed they were in immediate, deadly danger from a man suddenly pointing a lethal weapon at them.

Case Four happened more recently. In January of 2017, Eugene Matthews, 83, answered a knock at his door in Parrish, Florida, with a gun in his hand and, almost immediately, began shooting. Investigators saw no provocation. The people at the door were the daughter and brother-in-law of a neighbor who was waiting in a car at the curb; they were looking for the neighbor’s lost dog. The armed homeowner’s gunfire killed the woman in the car. Mr. Matthews was arrested and is awaiting trial as of this writing, and of course must be presumed innocent until proven guilty.

This is obviously not the poster child for armed citizens. But before we think, “I’d never do anything like that,” we must consider that the community’s memory of this incident will be in the collective memory of the jury pool in Manatee County, Florida, the next time a citizen there gets in trouble for anything that began with answering a door with a gun visibly in hand.

When we discuss opening the door to the unexpected with a gun in your hand, the operative safety term is really “opening the door.” In home invasions, a common tactic is the “push-in robbery”—the criminal tricks the resident into opening the door on a pretext, then barges in. This is why so many answer the door armed to begin with.

Some people like to think that if they point their gun muzzle down instead of directly at a person, they can’t be charged with aggravated assault. To stand on that argument is to stand on very thin ice. Putting someone in fear of their life with a lethal weapon does not require pointing it directly at them, and even with the muzzle away from the door, it can be construed as aggravated assault if the prosecutor wants to make it so.

If the door never opens, the neighbor or paper boy or midnight-shift Girl Scout selling cookies never sees the gun, and a charge of aggravated assault is unlikely to be sustained. Perhaps more to the point, a push-in robber never gets to first base.

Consider having a closed-circuit TV system or at least an intercom that lets you get a good idea of who’s on the other side of that door before you open it at all. That technology is very affordable now.

If you live in a rental property that doesn’t allow this hardware or are staying in the typical motel room that doesn’t have it, nothing but the momentum of social convention says you have to open the door at all. Even if you have to raise your voice, you can verbally communicate with the person on the other side of the door before you begin to unlock it.

If circumstances demand that you open the door, it will work better if your gun is not in hand should the party who knocked turn out to be the police. If you don’t have a holster on, put the gun in your waistband or a pants or robe pocket. It’s still readily accessible but presents no visible threat. (Don’t put striker-fired guns in a pocket or waistband without them being in a holster that covers the triggerguard: I agree with the manufacturers of those pistols on this point.)

More Lessons for the Armed Homeowner

Don’t bring a long gun to the door. You can’t hide it and still be able to deploy it quickly if necessary. In Case Five, a young New Jersey man heard noises and saw flashlights in the driveway of the home he shared with his parents. He retrieved his 12-gauge pump, stepped out onto the porch and racked a round in the chamber, stating later that he wanted to scare the people away. He did indeed scare them, but they were all cops looking for a burglar they’d been chasing, at least one of whom perceived him as pointing the shotgun at him. Miraculously, they didn’t shoot the young man, but they did arrest him and charge him with felony aggravated assault on a police officer. After an expensive year-long ordeal, he was fortunate enough to be acquitted by a sympathetic jury. It’s not an experience the rest of us want to share.

Indeed, stepping outside with a gun visible is to be avoided. In Case Six, Baton Rouge homeowner Rodney Peairs opened his front door to confront two strangers who had rattled the door, and when one came toward him, he fired a single shot from his S&W .44 Magnum. The bullet killed a teenage exchange student from Japan named Yashiro Hattori. Because of the unusual chain of events that led to the shooting, Peairs was found not guilty of manslaughter in his criminal trial, but in civil court, he was hammered with a massive judgement against him. On appeal, the higher court sustained the verdict against Peairs, and one of the justices wrote that if the defendant had simply stayed inside where he and his wife and kids were safe, the young victim would not have died.

Caution at the doorway and refusing to open the door until you’re certain the strangers on the other side mean no harm can save the lives and futures on both sides of the door. 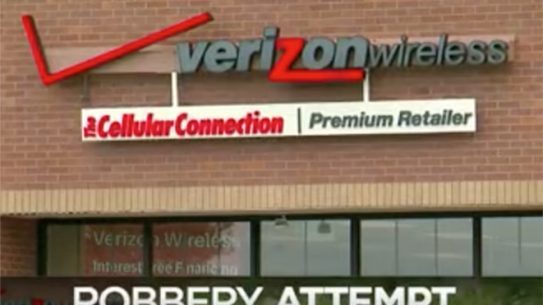