Cops vs Bikers Video No. 1

The first video above comes from YouTuber KorrSacoPaco, who posted the clip back in September of 2016. He says, “Was headed home from an afternoon of riding, wheelies, and twisties. Just so happened to run into an interesting situation.”

The biker quickly pulls over for the officer, who sees the firearm on his waist. The officer asks the biker not to reach near it because it’s visible, which the biker calmly complies with. Watch the entire exchange above.

Cops vs Bikers Video No. 2

The second video below shows a similar situation. A biker with the YouTube handle Benjamminoutdoors, who posted the video in January 2017, is breaking several traffic violations when he is pulled over.

“Driving through downtown Auburn and was being very stupid and was driving like a douchè and was weaving and speeding,” he says. “I glanced to my left but I did not see the cop until I reviewed the footage. I got what I deserved.”

Unlike the first video, the biker in the second video does not have a visible handgun on him. Instead, he informs the officer that he is carrying. After showing the officer where the gun is, the conversation continues. Watch more below. 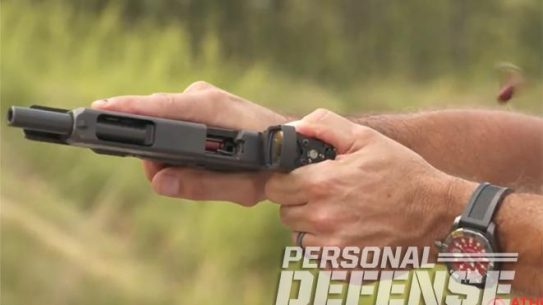 VIDEO: The Immediate Action Pistol Drill that Could Save Your Life

If your pistol goes 'click' instead of 'bang' while you're engaging a threat, this...