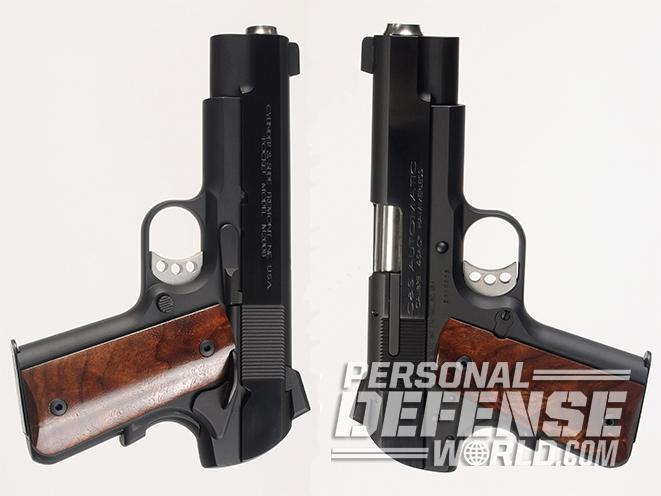 1 of 13
Cylinder & Slide Pocket Model M2008
“I want to thank Bill and the C&S crew for allowing me to grab one of the first Standard models out of the second run for this evaluation. While I have tested a lot of neat pistols over the years, this one was special.” 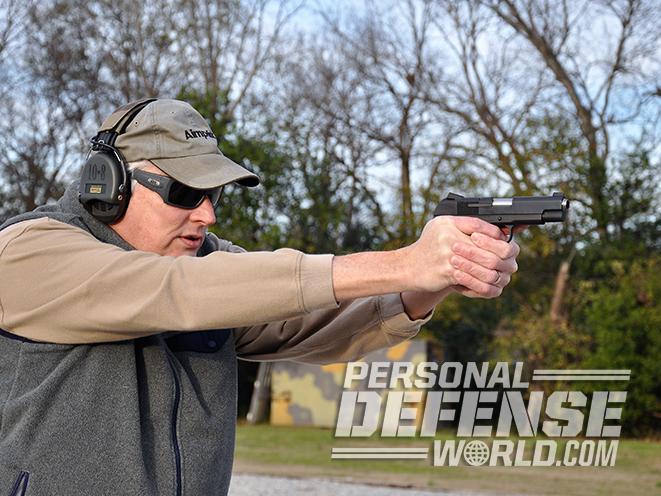 2 of 13
Cylinder & Slide Pocket Model M2008
Despite being chambered in .45 ACP, the Pocket Model 2008 is easy to keep on target thanks to its ergonomic, hand-filling design. 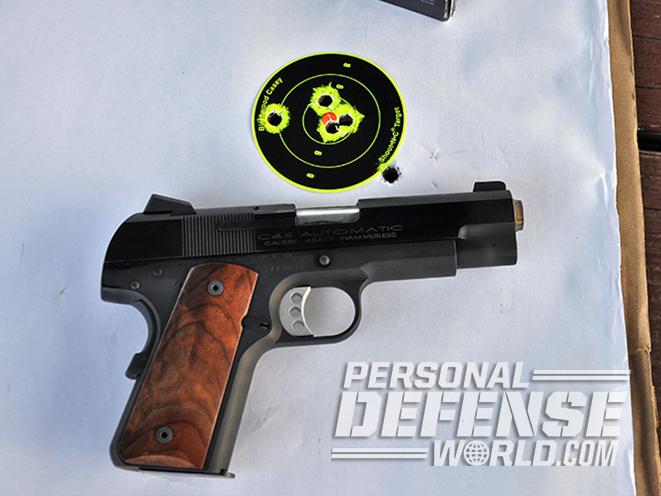 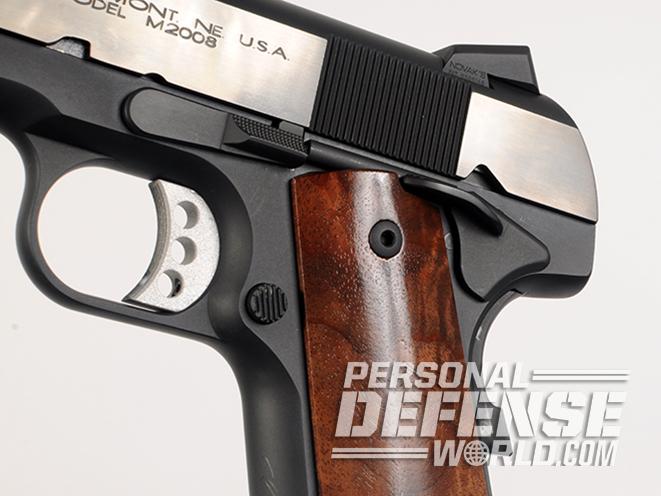 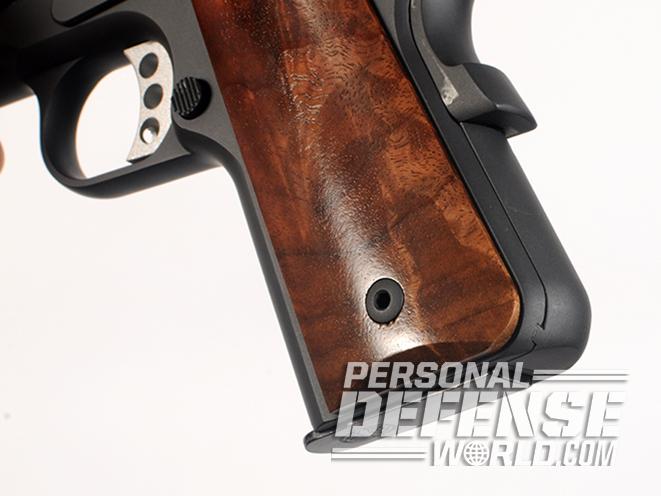 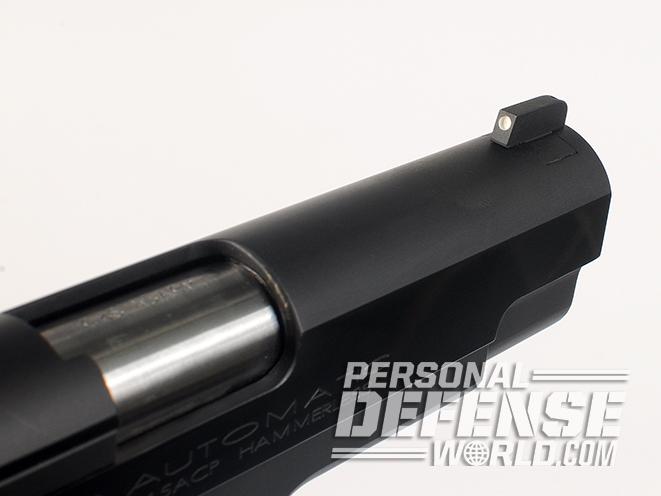 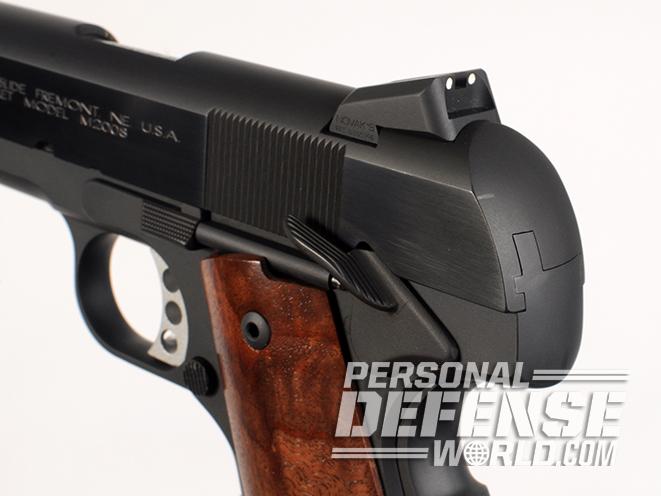 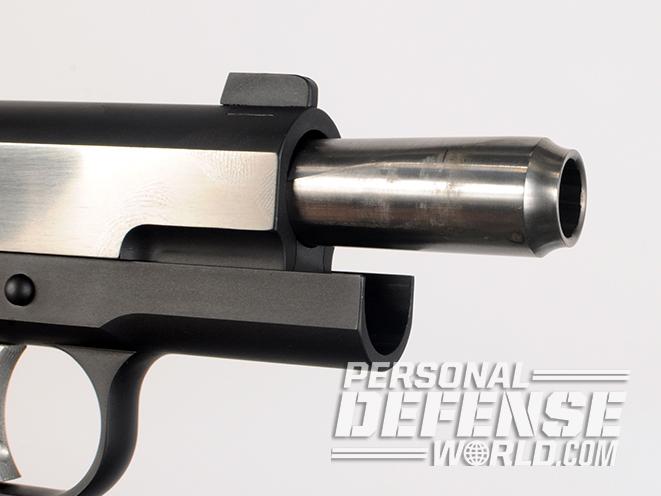 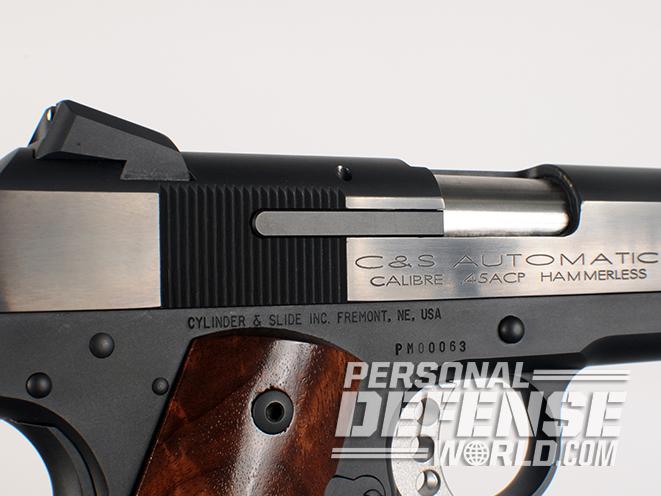 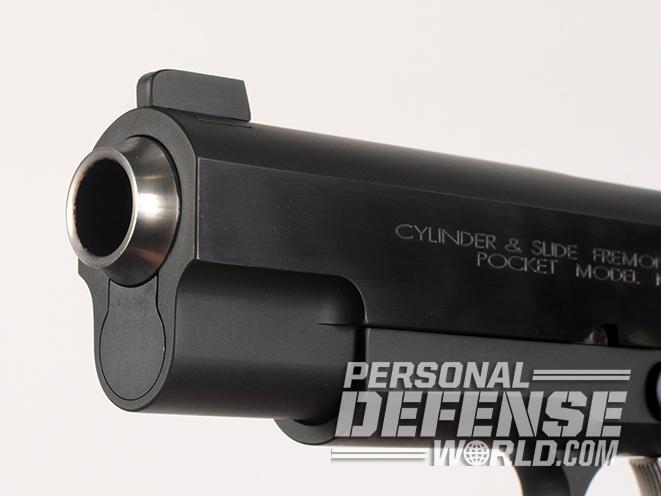 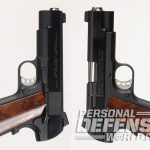 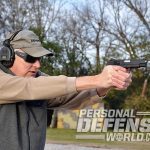 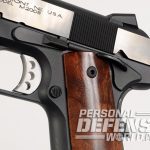 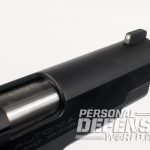 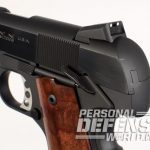 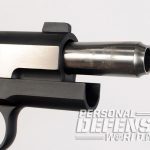 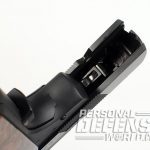 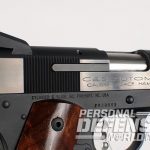 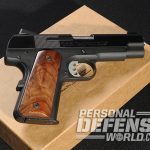 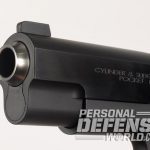 The term “classic” is defined by the Oxford dictionary as “judged over a period of time to be of the highest quality and outstanding of its kind.” I can think of no better description of Colt’s Model 1903 and Model 1908 Pocket Hammerless pistols. When introduced, the Model 1903 was an immediate success, and well over half a million were produced. Chambered in .32 ACP, the Model 1903 was adopted by the U.S. military and was issued to general officers. The NRA National Firearm’s Museum, located in Fairfax, Virginia, has an excellent display of Model 1903 general officer’s pistols, including the pistol issued to General Douglas MacArthur. Colt later introduced the Model 1908 in the more potent .380 ACP caliber. These pistols remain extremely popular to this day. Colt has even partnered with U.S. Armament to produce a new production of the Model 1903.

Several years ago, I had the opportunity to visit Cylinder & Slide and spend a couple of days with my good friend, Bill Laughridge. On a cold and gloomy Nebraska Saturday, Bill and I were knocking around the shop when he decided he needed to do an inventory of his personal firearms. (In reality, I think the sole purpose of this exercise was to torture me!) As we opened the first drawer of a blueprint file cabinet, I saw a number of pistols that caught my eye. However, none captured my attention like two pristine Colt Pocket Hammerless models. One was a Model 1903 and the second was a Model 1908. Bill explained that he had always been enamored with the little guns. His next statement caught me by surprise. Bill said, “Too bad Colt never made one in .45 ACP.”

A couple of years went by before I received a call from Bill. He asked what I thought of upscaling the Model 1908 to fire the .45 ACP. I was immediately enthralled. Bill went on to explain that he thought he could use an Officer’s Model frame and a Commander-length slide as the foundation for the build. If anyone could figure this out, I knew it would be Bill. I also knew that it would either be done correctly or not at all!

To quote Bill, “The greatest problems to overcome were making a slide and frame that would conceal the hammer and the internal extractor that the 1911 was designed with. The advent of the external extractor for the 1911 pistol solved the extractor problem, but the manufacture of the slide and frame was still the problem. Welding additional pieces of metal onto the slide and frame and re-machining them was not a good option, as the welding would ruin the heat treatment in the slide and frame. Re-heat treating the parts was not an economical option. It suddenly came to me that the additional metal parts could be silver soldered on without destroying the heat treatment in the slide and frame, and I have one of the best silver solder experts working with me in the shop, Chris Hagemann. I approached Chris about the project, and he thought that he could solder the parts together without any problems.”

Bill started off with a Caspian Commander-length slide with an external ejector and an Officer’s Model frame. He then set out to “graft” an extension onto the rear of the slide and redesign the hammer to function inside the extension. He also had to design a new mainspring housing, grip safety and recoil spring plug. The recoil spring plug had to fit flush with the end of the slide and the contour of the barrel. Then came the barrel. Bill designed a conical barrel that did not require a barrel bushing but had the uniquely shaped extension past the end of the slide. Due to the enclosed slide, the firing pin had to be modified. The greatest problems to overcome were making a slide and frame that would conceal the hammer and the internal extractor that the 1911 was designed with.

Every few weeks, as the prototype was being built, Bill would send me a few teaser photos and we would talk on the phone about the project. The project was not without its challenges, but Bill was able to solve every problem. Once the prototype was completed, Bill needed to crunch the numbers and contact the manufacturers to see if the project was actually feasible. Bill drafted the blueprint drawings of the parts and set about finding vendors for items that he could not produce in-house. His first call was to Caspian for the frame and slide. Caspian found that it could modify one of its frame molds to include the rear extension. The company also signed on to machine the slides with the rear extension to conceal the hammer. Bill is quick to point out that without Caspian’s assistance, the project could have never gone into production. Bill Jarvis agreed to manufacture the uniquely profiled barrel. Internally, Bill used Cylinder & Slide’s billet alloy steel hammer, sear and disconnector. Bill retained the 1911’s traditional frame-mounted magazine release.

The end result was the introduction of the Cylinder & Slide Pocket Model 2008. Due to the substantial investment of the specialized components, the first production run included 50 pistols. The majority, “Historical” variants, featured original-style fixed sights. These guns were master polished on both the rounds and the flats before bluing. The extractor, thumb safety, magazine catch, slide stop and grip screws were finished in a high-luster niter blue. The result was absolutely stunning.

The markings on the C&S Pocket Model deserve a special comment. Bill worked to find a font that replicated the original Colt markings and a size that was proportional to the size of the pistol. The right side of the slide is marked “C&S AUTOMATIC” with a second line that is marked “CALIBRE .45 ACP HAMMERLESS.” On the left side of the slide is the manufacturer’s marking with “CYLINDER & SLIDE FREMONT NE USA” on the top line and “POCKET MODEL M2008” on the lower line. The markings are crisp and add to the appearance of authenticity. It looks like a Model 1908!

However, Bill also recognized that there was a market for everyday carry and personal defense. Therefore, he also offered the “Standard” model, which featured Novak low-profile sights, a three-hole aluminum trigger and a Cylinder & Slide extended thumb safety. In addition, the Standard model has a matte blue finish with only the slide flats being polished.

In 2016, Bill started the process to build a second run of 50 Pocket Models. I recently received one of his Standard models for evaluation. As with the Historical models, the Standard model is shipped in a cardboard box that is stamped with the C&S logo and company information. A line is also provided for the model and serial number of the pistol. This is a very old school touch. Opening the box, I found that the pistol was wrapped in corrosion-inhibiting paper, another nice touch.

A closer examination found that the Pocket Model was built to the same high standards as every other custom C&S pistol I have tested. The slide-to-frame fit was void of any play, and the slide cycled like glass on glass. The lockup was very tight, and I was glad I ran a box of 230 FMJs through the gun to break it in. The enclosed slide provided a very clear and uncluttered sight picture, something I had not thought about. The extended thumb safety is contoured so that, when in the “fire” position, the lever lays parallel to the slide. The speed bump on the grip safety ensures that positive contact is made with a proper grip. The trigger broke cleanly, averaging 4.44 pounds with no overtravel. Finally, the rounded butt prevented the corners of the shortened frame from digging into the palm of my hand. Although the hammer is concealed, the manual of arms for the Pocket Model is the same as any other 1911. The single exception is that there is no way to manually lower the hammer.

Since this Standard model is designed for personal defense, I selected three modern defensive loads for this evaluation. Perhaps the most unique is Gorilla’s Silverback 230-grain FBI load. The bullet is a solid-copper projectile that is machined on a Swiss lathe. The projectile has a very distinctive waist and is pre-scored for rapid and controlled expansion. The Silverback was the mildest shooting of the three loads, averaging 750 fps. I also tested Hornady’s proven 185-grain Critical Defense FTX load, which averaged 984 fps. My final test load, Sig Sauer’s 200-grain V-Crown JHPs, averaged 867 fps. All of the loads were reliable in the Pocket Model, with the Gorilla load being favored due to the lower velocity and soft shooting characteristics. Also, the pistol’s three-dot Novak sights were more than adequate for the testing.

So, is the Pocket Model worth the price? Setting aside the classic appearance, the Pocket Model is a modern and reliable pistol built with quality and proven parts. It is a specialty pistol that requires a substantial investment to own. However, it is no more expensive than mid-level pistols offered by Nighthawk Custom and Wilson Combat. The Pocket Model fits the hand, conceals well and shoots like a dream. It is certainly a pistol that I would carry on a daily basis in my Milt Sparks Summer Special IWB rig. The design also makes it an ideal pistol for appendix carry for those who favor this method of concealment.

If I could change anything, I’d probably opt for a plain black rear sight and a gold bead front sight. I would also prefer a solid, medium-length trigger. The three-hole unit just doesn’t look right to me. Finally, I would have to invest in a set of politically incorrect ivory grip panels! Even being an everyday-carry pistol, the lines of the pistol are begging for some engraving. I may not spring for full coverage, but it would take an already gorgeous pistol and make it stunning.

I want to thank Bill and the C&S crew for allowing me to grab one of the first Standard models out of the second run for this evaluation. While I have tested a lot of neat pistols over the years, this one was special.

This article was originally published in ‘Pocket Pistols’ Spring 2017. To order a copy, visit outdoorgroupstore.com. 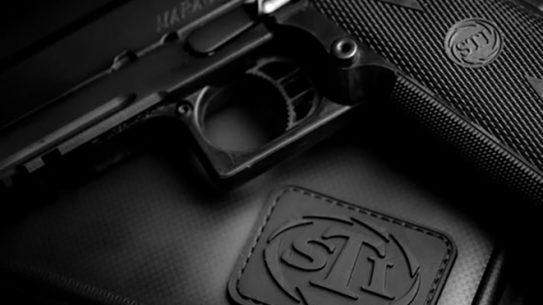