Almost 20 years ago, a good friend let me take a look at a pistol he had on hand. I had read about that particular model, and had enjoyed the rave reviews about it, but still had my doubts for whatever reason. It wasn’t until I took that CZ 75 B to the range that I was convinced. Needless to say, that pistol is in my collection to this day, and I’ve been watching and acquiring products from Ceská Zbrojovka, or CZ, ever since. Long known for the quality, reliability and accuracy of its firearms, CZ has introduced a number of innovative weapons over the last several years, including the Scorpion EVO 3, the 805 Bren and its extremely popular competition pistols. Now CZ has thrown down the gauntlet with the introduction of its polymer-framed, striker-fired P-10 C.

In an industry that is focusing heavily on striker-fired pistols, manufacturers have been trying to wring every bit of performance from the polymer wonders that they can. Everyone is trying to focus on better ergonomics, improved trigger pulls and shorter resets. CZ has jumped into this industry segment with both feet as if to announce, “We’re here and we’re already caught up!”

Though the P-10 C is CZ’s first foray into the striker-fired market, it looks like a lot of meticulous planning and engineering went into the design and execution of this offering. First, the ergonomics of the pistol are superb and somewhat reminiscent of the CZ 75. The undercut triggerguard allows the user to choke up higher on the grip. At the same time, the grip frame features a generously high-cut beavertail. This allows the user to get a very high grip on the pistol, helping to improve recoil control for quicker and more controllable follow-up shots.

Also assisting in this effort is the trigger reset after firing a shot. The reset distance is incredibly short, and I’ll go out on a limb and say it’s the shortest reset I’ve tried on any striker-fired pistol. Coupled with the great ergonomics, the minute reset distance also contributes to faster follow-up shots as well.

Another feather in CZ’s cap is the light and crisp trigger pull of the P-10 C. It breaks nicely at just 4 pounds and doesn’t have that mushy “sproing” feel at the end of the pull that you get with some striker-fired pistols. Combine this pull with the short reset, and you have an incredibly good-shooting combat pistol.

Other extra touches expected by the modern combat shooter include an ambidextrous magazine release and an ambidextrous slide stop/release. Both are low-profile controls but are easy to manipulate and provide a positive response when actuated. Also, there are serrations at the front and rear of the P-10 C’s slide for charging or press-checking the weapon.

That’s just my own personal opinion of the texturing. It works great with gloves but just feels a bit too abrasive for my ungloved hands. But that’s not a deal breaker for me. I’ve got multiple ways to file and sand those points down to where it will be nice and comfy to shoot.

The pistol is 7.3 inches long with a 4.02-inch, cold-hammer-forged barrel. The P-10 C weighs in at 26 ounces unloaded and has a width of 1.03 inches, making it an ideal concealed-carry pistol when weighing capacity against form factor.

Interestingly enough, there are checkered sections on both sides of the frame, just above the triggerguard, for resting the thumb of the weak hand while shooting. The CZ also comes with a rail for the addition of lights and other accessories. And the triggerguard is oversized to ensure proper operation with gloved hands.

The specs from the factory state that there are three interchangeable backstraps, including the one on the pistol, though the sample I received only had two. All that’s required to change out the backstraps is a punch to drive the pin out and slide the part off. Finally, the bottom of the grip (where it meets the floorplate of the magazine) has concave dips in the frame so the user can get a purchase on the magazine if it’s too dirty to drop freely from the pistol.

The three-dot sights are made from steel. I worked with a pre-production model in Flat Dark Earth, and it had luminescent sights that could be charged from ambient light. However, production P-10 C FDE pistols will soon be available with tritium night sights. A black, suppressor-ready model will have tall tritium night sights as well.

The craziest part of all of this is the MSRP on these pistols. The all-black base model in 9mm has an MSRP of $516 while the FDE model is $541 and the suppressor-ready 9mm model is $519. That’s an insanely low price when you consider the suppressor-ready model comes with 17-round magazines, a threaded barrel and tritium sights. CZ is bringing its game big time!

Shooting a fine CZ weapon at the range for the first time is a little bit like a first kiss. It makes you a bit lightheaded, and a dopey grin stays on your face for a while. I had that reaction when I tried the CZ 75 B the first time, and when the smoke cleared after firing the first magazine’s worth of ammo through the P-10 C.

The pistol was very flat shooting, and because of its great ergonomics, the recoil was dampened significantly. Its accuracy was excellent from the very beginning. During the first range session, I took a friend to help, and I loaded two magazines with 10 rounds each for the first time I shot the pistol off hand. His mouth hung open at the results downrange. After around four to five shots of finding the correct point of aim at 15 yards, the P-10 C chewed one big hole in the paper with the remaining 15 rounds. It was a sight to see, and we were both instantly sold.

After that it was time to do some more formal accuracy testing, so we broke out some premium loads from Sig Sauer, DoubleTap, Federal and Speer. All of the accuracy tests were done from a standing rest at 15 yards. The best group and best average group came with Federal’s 147-grain +P HST rounds, with the best group coming in at 1.38 inches and the average group size coming in at just 1.73 inches.

As expected, the reliability was excellent. No break-in was required, and the P-10 C was already lubed up and ready to rock out of the box. Not a single malfunction was experienced with the test loads or the FMJ ammunition that was used, including Sig’s 115-grain FMJs and Federal Premium’s new 115-grain Syntec range ammunition.

While at the range, we went ahead and did some holster drills. Fobus Holsters already has a model to fit the P-10 C—the Evolution. These rigs can be had as belt or paddle holsters. The model we received was the VPQBH, which fits onto a belt.

It wasn’t an exact fit, but it was very close. And it’s an excellent range companion since the VPQBH fits a host of different pistols, making it easy to run drills with different weapons. Additionally, since the Evolution is a molded, one-piece affair, it is very slim and trim and makes for a great carry holster under a properly fitted jacket. 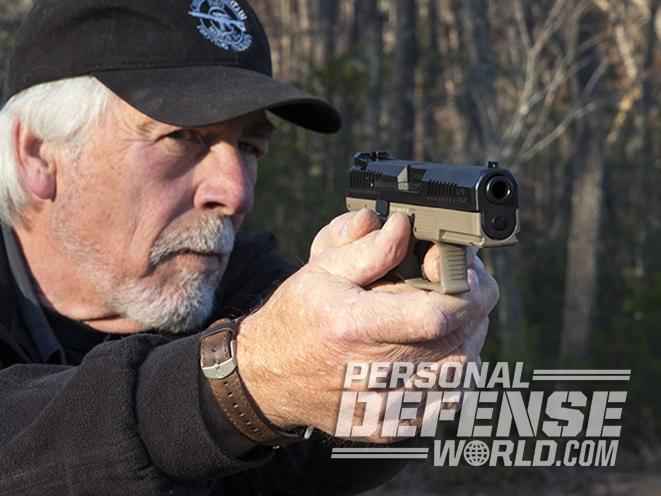 Admittedly, I went into this review with high expectations based on previous experiences with CZ firearms. However, I’m the first one that’ll speak up when something doesn’t work as it should. Thankfully, the P-10 C just flat-out works.

I have shot some of the best polymer-framed, striker-fired pistols, and the CZ P-10 C is easily the equal of any of them, if not better. The combination of a great ergonomic design with the ultra-clean trigger pull and short reset makes it an excellent shooting platform for defensive work.

The size matches the capacity where some models are a little too big for the number of rounds they carry. This makes the P-10 C a perfect concealed-carry companion. Even with the ambidextrous controls, it maintains a slim profile while offering everything a shooter needs and nothing they don’t.

What really pushes the P-10 C to the front of the pack is the price point at which CZ offers such quality and performance. All things considered, you’d be crazy not to try out the P-10 C if you’re in the market for a striker-fired pistol. It lives up to the CZ name and carries forth the company’s legacy of making some of the best firearms in the world.