An attempted robbery at a Minnesota Verizon Wireless store went awry for the suspects when a store clerk pulled out his legally-owned handgun and opened fire.

According to police, two men—one of them armed—walked into The Cellular Connection in the city of Inver Grove Heights at around 11 a.m., approached a clerk in the employee area at the back of the store and announced that a robbery was taking place.

While the clerk was being held at gunpoint, he managed to draw his own concealed carry handgun from his waistband and start shooting. A brief gunfight ensued, which ended with the armed suspect being hit. The second suspect immediately ran from the store and took off in a getaway vehicle.

Authorities arrived at the scene shortly thereafter to find 32-year-old Jamaal Marquie Mays on the ground suffering from several gunshot wounds. He was transported to an area hospital, where he was listed in critical condition as of Friday evening. Mays is reportedly a convicted felon with a lengthy rap sheet.

The second suspect is still at large. He’s described as a black male between the ages of 20 and 30. He was wearing dark-colors pants, a dark-green jacket, baseball hat and black Nike shoes with a white swoosh. The vehicle he escaped in a bluish-green 2000 Honda Odyssey minivan.

During the investigation, it was determined that one of the two armed robbers had been in the store “doing a little preplanning” before the attempted robbery, Inver Grove Heights police Lt. Joshua Otis said.

The motive for the robbery—cash or phones—is unknown, Otis added.

Police confirmed that the store clerk had a concealed carry permit.

The case has been forwarded to the Dakota County attorney’s office for possible charges against Mays. 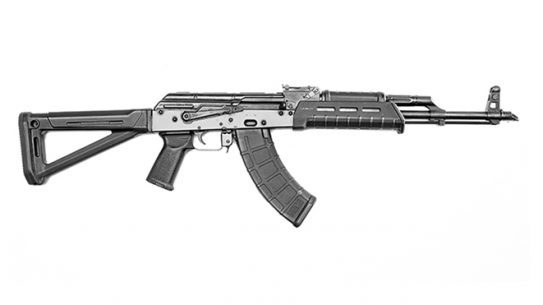 A Florida man fired multiple rounds from his AK-47 in self defense after he...