New York police recently confiscated the gun collection of a 70-year-old Vietnam veteran. The only problem? They had the wrong guy.

According to Syracuse.com, Don Hall was in his Taberg, N.Y. living room watching television with his girlfriend earlier this year when he suddenly saw a police car in his driveway. He went outside and talked with the Oneida County sheriff’s deputies, who showed him an official document that said he had mental issues and ordered him to hand over his guns.

Hall told the deputies he didn’t have any mental problems, and they told him he had to have done something to trigger the confiscation order under the New York SAFE Act.

Realizing that his best course of action at that time was to comply, Hall handed the deputies his firearm collection—two handguns and four long guns. He then hired a lawyer and set about getting affidavits from local hospitals to prove he hadn’t been treated for mental issues. During that process, he figured out the likely reason for the mistaken confiscation.

The hospital where Hall underwent a sleep apnea test four years earlier had also treated a man with the same name and similar social security number for a mental health issue. Hall and his lawyer, John Panzone, say that’s where the confusion occurred.

Oneida County Judge Michael Dwyer agreed, and Hall had all of his firearms returned to him after several months.

Hall is happy to have the ordeal behind him, but he said nobody at a hospital or at a state or local agency involved in confiscating his guns has apologized or explained what happened.

“I was guilty until I could prove myself innocent,” Hall said. “They don’t tell you why or what you supposedly did. It was just a bad screw-up.”

While Hall said he was initially told his guns were being confiscated under the SAFE Act—which requires health providers to report patients they think are a risk to themselves or others— the state Office of Mental Health told Syracuse.com the case was actually reported through a system set up by the Brady Handgun Violence Prevention Act, adopted in 1993. That law requires a hospital or medical facility to report anybody who has been involuntary committed or ruled “mentally defective” in the eyes of the law.

Paloma Capanna, a civil rights lawyer in the Rochester area who works on SAFE Act cases, said there’s a “tremendous lack of confusion” over whether somebody is flagged through the SAFE Act or another law. Often, she said, there’s no investigation to ensure the complaint is valid, and there’s no due process for the accused before the guns are taken away.

Panzone said he’s astonished that nobody picked up on the fact that they had the wrong man sooner.

“I’m surprised it sailed through the way it did with a man who has a spotless record,” the lawyer said. “To me, presumption of innocence is the foundation of our system, and this provision doesn’t allow for that.” 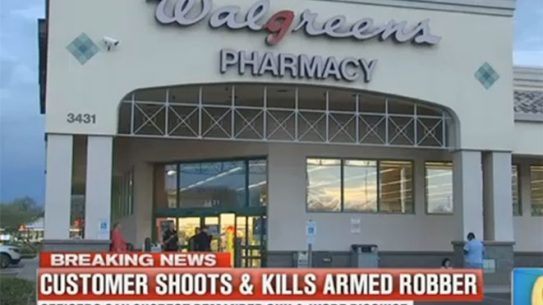 An armed man who jumped the counter at a Phoenix Walgreens and demanded oxycodone...