Once considered an inferior “man-stopping round” by some, the 9mm cartridge continues to gain ground on the prolific .45 ACP in 1911-style pistols, with the Sig 1911 Ultra Compact being one of the latest additions to the crowd. Firearms production data shows that the 9mm is the most popular defensive caliber made, and its prevalence is growing as new bullet designs make it more effective than in the past.

Though Sig Sauer is mostly known for its P-series pistols and, more recently, its technologically advanced MPX and MCX carbines, there 22 Sig 1911 models that span four categories based on height and length: Full Size, Carry, Compact and Subcompact. The Ultra Compact is a Subcompact available in 9mm or .45 ACP. I recently got my hands on the former.

The Ultra Compact is Sig Sauer’s smallest 1911. It has a respective length and height of 6.8 and 4.8 inches compared to a full-sized 1911 of 8.7 and 5.5 inches. The barrel length on the Ultra Compact is 3.3 inches versus 5 inches on the full-sized. Both pistols are 1.4 inches thick, so the reduction in the overall footprint primarily comes out of the length rather than the height. Thus, the Ultra Compact is smaller than other variants but still affords the shooter a full grip. With its eight-round magazine, you give up only one round of capacity compared to the larger 1911 models.

The Ultra Compact is made with a frame milled from a billet of aluminum alloy, a stainless steel slide made from bar stock, and a stainless barrel. Two-Tone pistols like the one I tested have satin stainless finishes on their slides while the standard models have black Nitron-finished slides. Both versions come with black anodized frames.

This pistol has a drop-safe feature that allows it to be safely carried in a proper holster with a round chambered and the thumb safety applied. The drop safe is a spring-loaded plunger that retains the firing pin away from the primer until the trigger is depressed. It is intended to stop the firing pin from moving forward to contact the primer if the pistol is dropped on the muzzle.

The fit and finish on my sample were very good, especially the tight slide-to-frame and barrel-to-slide fit, and the thumb safety, slide lock and magazine release all operated crisply with the proper amount of resistance.

The Ultra Compact uses a locked-breech design similar to the 1911’s. It has locking lugs on the top of the barrel, just ahead of the chamber, that mate with corresponding lugs in the slide and a swinging link connecting the barrel lug to the frame. However, Sig Sauer explains that making a reliable, ultra-short-barreled 1911 requires lots of engineering and a design that necessarily departs from the original in many more aspects than shortening the slide, frame and barrel and using a heavier recoil spring to maintain proper slide velocities.

For instance, the manner in which the front of the barrel fits the slide needed revision. Because the repeatability and tightness of this fit is critical to accuracy, Sig uses a slightly flared barrel to mate with the slide. Another change is a full-length, one-piece steel recoil spring guide rod that captures the recoil spring. In conjunction with the flared barrel, this design makes field-stripping the pistol much easier and quicker than a traditional 1911 with its guide rod plug and barrel bushing. Two other improvements include an external pivoting extractor instead of an internal extractor and a flat recoil spring instead of a round wire spring. Sig was one of the earliest 1911 makers to use this extractor with tests showing that extractor tension is more consistent and lasts longer than the internal design. Sig also feels that flat recoil springs keep their tension longer and uses them on all of its 1911s. 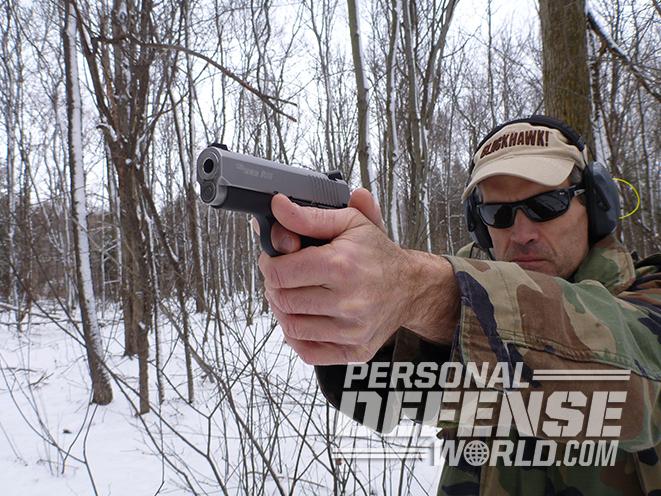 To test the pistol’s accuracy, I used a Caldwell rest to fire five-shot groups with three brands of ammunition at a target 15 yards away. The best groups, measuring 1.4 and 1.5 inches, came with the Winchester and Atlanta Arms loads. All three of the test loads shot 1 to 2 inches above the point of aim and required no windage adjustments, which would be fairly easy to do by loosening the setscrew on the rear sight and drifting it by hand. Sig sells an adjustable combat rear sight if replacement is needed.

The average group sizes were considerably wider at 2.25 to 2.75 inches due to group-widening fliers that I attribute to the sights, which reflected glare and made precision work very difficult.

Given the velocities that hovered just below 1,100 fps, I would personally carry +P loads in a pistol with a barrel this short to get the numbers over 1,100 fps for consistent bullet expansion. Quantifying the difference in velocity between the 3.3-inch barrel of the Ultra Compact compared to the 5-inch barrel of a full-sized 1911 is worthwhile, but it wasn’t possible at the time of testing. However, a rough comparison showed that the longer barrel of the full-sized Sig 1911 generated 106-fps more velocity using the same brand of ammo and at moderately different temperatures. Bottom line: For defensive handguns, testing for both functioning and reliable bullet expansion is a good idea regardless of the barrel length.

The pistol’s reliability was perfect in firing 200 rounds except for three failures to lock the slide back after the last round was fired, but switching the magazines in use solved the problem immediately.

The Ultra Compact points very well and handles recoil easily. The trigger weighed 4.69 pounds according to my Lyman digital trigger pull gauge, and it had about 0.13 inches of take-up and barely discernible creep. The trigger came properly set from the factory for no overtravel, so adjustments weren’t necessary using an Allen-head screw accessible through the front of the trigger. The trigger shoe has a grooved face and is long enough to position my finger well for single-action fire.

Tactical reloads are easier with the Ultra Compact than some other pistols since a full magazine can be inserted and locked into place when the slide is closed without excessive force.

This pistol has good ergonomics thanks to the checkered rosewood grips and 25- and 20-lpi checkering on the frontstrap and mainspring housing, respectively, that afford a very good grip and a safety that activates positively and easily. The magazine release button can be activated without a change in grip, and for left-handed shooters, a thumb safety lever can be added on the right side for $100 from the Sig Custom Shop. The slide release lever is slightly longer than most designs, and it allows activation with the shooter’s right thumb. This technique also worked, albeit imperfectly, when firing left-handed by using the trigger finger. Still, a slightly longer lever would optimize the fit with small- to medium-length thumbs.

Though the Ultra Compact is on the short side for a 1911, this pistol’s grip was large enough to provide good control and easy recoil management. It also makes accessing and drawing the pistol from an inside-the-waistband (IWB) holster like the Alien Gear Cloak Tuck that I use easier and quicker than pistols with abbreviated grips that supply a four-finger rather than a full-hand hold on the pistol. 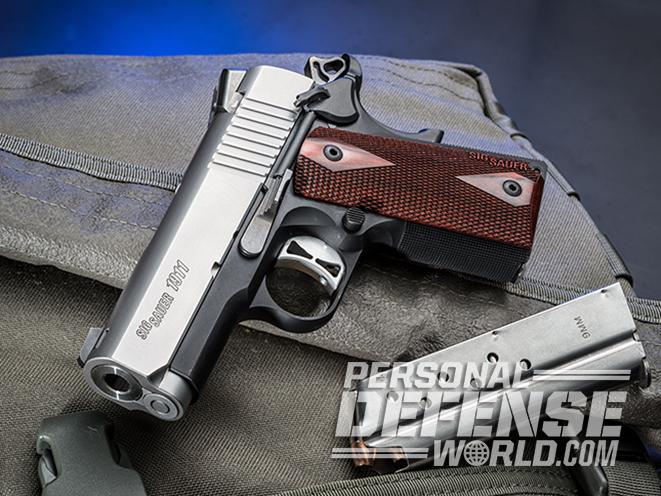 If you are considering a subcompact, single-stack 9mm, the Sig 1911 Ultra Compact compares favorably in size, quality and ease of shooting with everything on the market. It disassembles for cleaning with the ease of any polymer-framed pistol and has an eight-round magazine where some of the more popular plastic models have fewer. Though this pistol would be normally carried using its flush-fitting, eight-round magazine, spare 10-round magazines are made by Wilson Combat. Finally, the 1911’s crisp trigger and large, easy-to-activate thumb safety are easy to learn.