That’s right. Your eyes aren’t deceiving you. Springfield has created a DA/SA version of the XD for those shooters who don’t trust striker-fired CCW pistols.

At the 2017 NRA Annual Meetings in Atlanta, Springfield Armory formally introduced the newest gun to its XD product lineup. Called the Springfield XD-E, it was instantly controversial, with some experts anointing it “the gun nobody wanted,” while others congratulated Springfield for its innovation and willingness to cater to a niche market.

What makes the new Springfield XD-E controversial is its trigger mechanism. Springfield engineers replaced the striker mechanism with a double-action/single- action (DA/SA) trigger and an external hammer. Yep, that’s what the “E” stands for in XD-E! While the XD-E may not be for everybody, it should be popular with a certain segment of the CCW market that are just not comfortable with striker-fired guns. The gun also features a manual thumb safety, which pulls double duty as a decocker and gives the XD-E user three possible conditions of readiness. In short, weighing just 25 ounces unloaded and measuring just an inch thick, Springfield Armory’s newest gun may be just the ticket for those who never found striker-fired guns appealing. 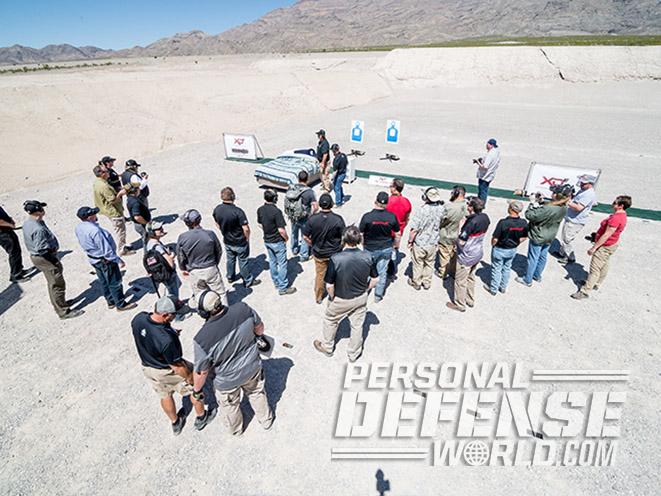 Two weeks before the gun was officially unveiled to the public, I was invited to Las Vegas to see the Springfield XD-E firsthand along with some 20 other gun writers and bloggers. We were sworn to secrecy before Springfield gathered us at the Clark County Shooting Complex just outside of Vegas.

After a brief introduction by Dennis Reese, Springfield’s owner and CEO, a PowerPoint presentation began. Up to this point, none of us had any idea what the new Springfield gun would be. Then we saw a picture of a hammer and the words, “There are some tools so basic, you can’t imagine being without them. But even essential tools can be refined and improved.” The next screen said, “That’s the principle behind the new XD-E: The best elements of the world-renowned XD series condensed into a pistol so intuitive, comfortable and accurate, you can’t imagine being without it.”

It was then that we all realized the newest addition to the XD lineup was a polymer-framed DA/SA pistol with an external hammer. My jaw fell, and quite honestly, I don’t think I was alone. After all, companies like Sig Sauer, Heckler & Koch and FN were all making the transition from hammer guns to striker-fired guns, and Springfield Armory was taking a step backwards, at least in my opinion.

After our brief classroom session, we had a chance to familiarize ourselves with the new XD-E on the range by shooting at steel targets supplied by Action Target. While others were shooting, I had the opportunity to speak with Dennis Reese about the new XD-E, and when I asked if Springfield Armory was taking a step backwards, he set me straight. “We’re trying to cater to the overall market. There are some people who simply are not comfortable with a striker-fired pistol. It’s a personal choice, and we wanted to offer this option to those who prefer an external hammer.”

Springfield Armory’s marketing research must have been exhaustive, because the XD-E is a completely new gun and shares only magazine interchangeability with the XD-S 9mm. That means new molds for the frame, all new trigger mechanism parts and tons of engineering money to bring the new gun to market. So, while others have dubbed the XD-E “the gun that no one wanted,” Springfield Armory is confident in its commitment to arm those uncomfortable with striker-fired pistols with a small, lightweight semi-auto 9mm. According to Rob Leatham, Springfield’s professional shooter, “The whole point of the XD-E is to give the shooter options.”

Those who prefer the Springfield XD-E will most likely also appreciate the pistol’s “Low-Effort Slide,” or LES, which Springfield claims requires 27-percent less effort to manually chamber a round. This feature will undoubtedly make the gun appealing to shooters who have trouble racking a stiff slide. At 58 years old, I guess I can include myself in this category.

The XD-E features a red fiber-optic front sight that is extremely easy to pick up on presentation and glows fiercely red with just a little ambient light. Talk about a sight for sore eyes! The low-profile rear sight is equipped with two white dots.

The XD-E has excellent ergonomics and points instinctively. Its backstrap is gently arched to prevent the gun from pointing high, and the beavertail and undercut triggerguard allow the shooter to get a very high hold on the pistol, putting the hand more in line with the bore axis, which helps considerably in attenuating muzzle rise. Springfield Armory also equips the little gun with its GripZone texturing, with three different texturing styles to enhance your control.

There are scallops on both sides of the frame to give both right- and left-handed shooters a convenient and readily indexed place for the thumb to rest while shooting. Both the magazine release and manual thumb safety are ambidextrous and can be activated with either hand comfortably.

Like a 1911, the thumb safety is engaged when in the up position. The gun can be carried with the hammer cocked and the safety engaged so that the pistol’s first shot is in SA mode. Most people will carry the gun with the hammer down for a DA first shot. Pushing down on the thumb safety will decock the gun, putting the hammer back in its down position without firing. Unlike the 1911, the gun can be loaded and unloaded with the manual safety engaged. It does not lock the slide or prevent it from moving when engaged.

Springfield Armory ships the XD-E with two magazines: an eight-rounder and a slightly extended nine-rounder. Two different floorplates are included with the eight-round magazine—one fits flush for maximum concealability and the other has a slight finger hook so shooters can get all three fingers comfortably on the frontstrap. The nine-round magazine has Springfield’s Grip X-Tension, a polymer sleeve that, for all intents and purposes, extends the length of the front- and backstraps and provides the shooter with a full-sized shooting grip.

It immediately became clear to me that I should have tested the gun at a greater distance, as most of my groups were just ragged holes. My single best group, produced with CorBon’s 115-grain +P JHPs, was tighter than an inch. My largest group was still well under 1.5 inches. In other words, this is amazing accuracy for a subcompact pistol. The XD-E’s sights made a clear and precise sight picture possible, and the 4.25-pound trigger was very crisp.

While we were in Vegas for the XD-E’s sneak preview, Springfield had set up multiple USPSA-type stages for us writers to shoot. CrossBreed Holsters supplied each of us with SuperTuck rigs with premium leather backings, Kydex molded pockets and SnapLok steel belt clips. Most of the stages involved very close targets requiring multiple hits, and I found the XD-E to be extremely controllable.

After returning from the event and firing another couple hundred rounds through the XD-E, I’m finding my speed increasing with familiarity. Transitioning between the relatively heavy DA first shot and much lighter SA trigger pull for follow-up shots proved to be no problem at all.

There were at least 20 XD-E production guns on the firing line in Las Vegas, and most of the writers put 300 to 500 rounds downrange without a single malfunction. Likewise, there were no stoppages or failures of any sort at my local range.

The Springfield XD-E’s disassembly process is quick and painless. After removing the magazine and ensuring the chamber is empty, pull the slide back and engage the slide stop. Now push the left side of the takedown lever up 90 degrees, depress the slide stop and pull the slide forward and off the frame. The captured dual recoil spring system can now be removed and then the barrel can be lifted out of the slide. That’s all there is to it. No tools are required.

There doesn’t seem to be much middle ground with the Springfield XD-E. You either love it or find it an unnecessary solution to a problem that doesn’t exist. I have to admit that when I first saw the XD-E, I was of that latter mindset. But the more I shoot it, the more I like it. It’s reliable, accurate and a pleasure to carry. If you are uncomfortable with striker-fired guns or just prefer an external hammer and DA/SA trigger, give the Springfield XD-E a look!