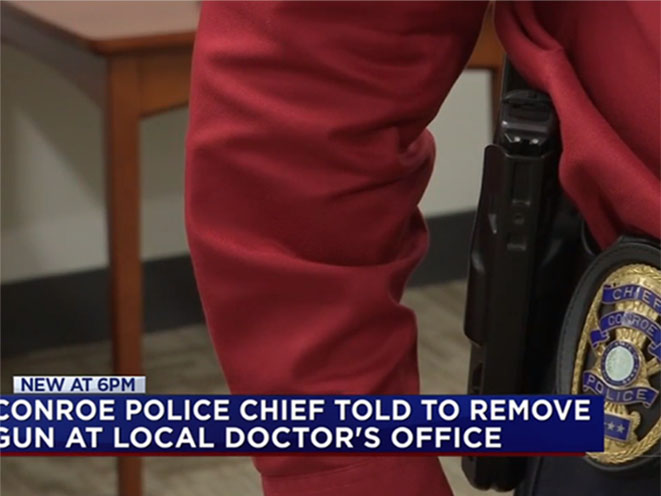 A Texas police chief walked into a doctor’s office and was promptly asked to leave because he was carrying his duty gun.

Conroe Police Chief Philip Dupuis told his local paper The Courier that he had his badge on his belt, as well as his Conroe PD ID on a lanyard around his neck when he entered the Texas Ear Nose and Throat Specialists office in The Woodlands last week. After taking his driver’s license and insurance card, the receptionist spotted his firearm in his holster and asked him to leave it in his car.

Dupuis—who has 35 years in law enforcement and has never had an accidental discharge—told the receptionist he wouldn’t disarm.

“I said, ‘I’m a police officer, I’m not gonna take my gun outside. I can carry in here’, and she said, ‘Well we have a policy, no firearms,’ and I said, ‘OK then, I’ll leave,” Dupuis recalled to ABC affiliate KTRK.

“I’m not gonna sit in an office without my gun when I have on everything else, with workplace violence and everything else going on in this society, I want to be armed and be able to react if I need to,” Dupuis said.

As a licensed police officer, Dupuis is technically allowed to open carry anywhere in the state, the Courier said. But private businesses and property owners can also prohibit firearms by posting the appropriate signs, and in fact, the Texas Ear Nose and Throat Specialists have a “No Firearms Allowed” sign posted outside the office.

“These people have the right to do what they did and refuse my service,” Dupuis said. “Legally, they can ask me to leave because I’m not there on official business.”

Even so, Dupuis was not happy, and he took to Facebook to vent his frustrations. Below is what he posted.

I will be looking for a new ENT, just asked to leave Dr Burkes office because I am wearing my gun, badge, and ID. I have never been so embarrassed (pissed) in my 35 years of law enforcement.

“Mr. Dupuis identified himself as a police officer,” Johnson told the Courier. “This situation simply should not have happened.”

The company also issued a statement on Facebook acknowledging the mistake, saying they would “continue to treat armed law enforcement officers who have the appropriate identification.”

Chief Dupuis said on Facebook that the support he’s received since the incident has been “overwhelming.” He also added the following:

While the office has made general statements on Facebook that the actions of their employee(s) were out of line and improper, I ask them to affirmatively state that on duty or uniformed police officers that are displaying the proper credentials will not be treated this way in the future. Officers should not be required to disarm or change out of their uniform while seeing their doctors or other professionals. Of course it is the right of every private business to serve who they wish, just as it is my right to not patronize any business that has such a policy or treats first responders this way.
Based on your loud and clear support of local police and repudiation of this type of political correctness run amok, I think Texas, Ear Nose and Throat Specialists has heard the passionate voice of Montgomery County. I hope they respond appropriately and make a very public and clear statement that officers will not be treated this way in the future.

Chief Dupuis told KTRK it was probably time to find a new doctor. 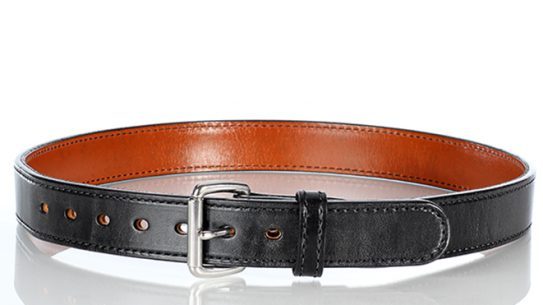 The Daltech Bullbelt Takes Gun & Holster Support to Another Level

The 'Super Stiff' Daltech Bullbelt model offers an insane amount of support thanks to...