by Rick Medina
in Home & Self-Defense, Ladies Only
0

Competitive shooting is different than combat shooting. There’s no doubt about that. But it’s also true that the two have much in common, especially when it comes to quick target acquisitions, trigger control and follow-through. The same way racecar technology is the impetus of speed and handling advancements in street cars, competitive shooters continue to assist us in improving our pistol prowess.

Of course, competitive shooters themselves do not command the stadium audiences, pay-per-view revenue and $10 million signing bonuses that the athletes of major sports do. In spite of that, or perhaps because of it, I’ve found competitive shooters to be some of the most dedicated and passionate athletes around. They shoot out of love for the sport, and thus are generous in sharing their expertise and insight. Professional shooters are called on to be shining ambassadors for the firearms industry, and Tori Nonaka is one of the brightest young guns out there on today’s competition circuit.

Raised in a family of gun enthusiasts, Tori fired her first .22 LR round at the tender age of three. By her early teens, she was a professional shooter. Tori’s billowing résumé is filled with an array of distinguished shooting titles won at competitions held across the world. Now a full-time touring competitor, Tori is the epitome of “high speed, low drag”—both on the firing line and throughout her life.

We recently got a chance to ask Tori a few questions about competitive shooting. What follows is a glimpse into her world and more than a few great shooting tips for today’s handgunners.

How many practice rounds do you fire in an average week?

It depends on what I’m training for. If I’m going to be shooting steel, it could be 1,000 to 2,000 rounds a day. If I’m preparing for an action competition involving running and reloads, my live fire would be less, as I would balance my practice time with those maneuvers.

Do you have a dry-fire routine? Any drills that you can share?

Yes, dry fire is a valuable part of any training regimen. One of the things I try to do is incorporate drawing into my dry-fire practice. It’s a good opportunity to hone your gun-handling skills, and you don’t have to be at the range to do it. I also try to make dry firing fun by setting speed goals and having my sister time me. 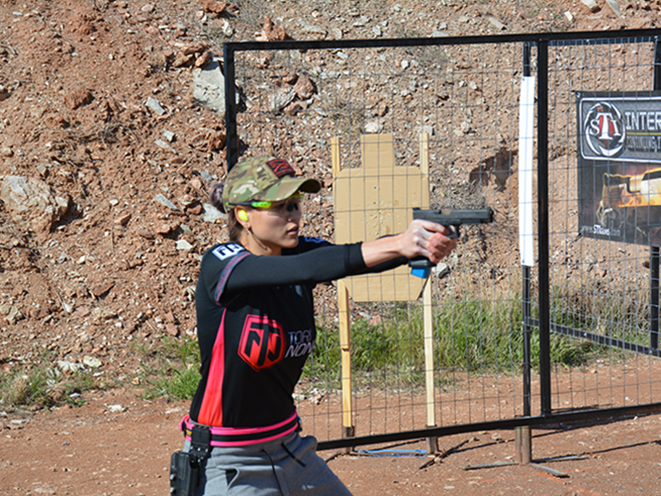 When facing multiple targets, how do you decide the best order to engage them?

A lot of it depends on how I’m moving. Am I coming in from the left or right? In which direction will I be heading afterward? You have to do what feels best, but for me, I don’t want to start my string with what would be the easiest exit target.

Do you use a traditional sight picture in targeting or a more instinctive alignment technique?

Do you reset the trigger while the slide is cycling or after the gun settles back on target?

I reset the trigger while the slide is cycling. I also prep the trigger [taking up any trigger slack after riding the link] and transition the pistol to the next target during this time. I want to break the shot the instant the gun settles on target.

They say the best way to increase speed when shooting is to reduce any unnecessary motions. Are there any actions that you made as an intermediate shooter that you have since eliminated?

One good example is I’m much more focused now on making sure that the gun is already up and out as my feet move into position. Over a stage, that saves a considerable amount of time. I used to think of running and shooting separately. Now, I see them as working together.

When your shots miss to the right, what usually causes that?

If I’m leaving a shooting position and I miss right on the exit target, chances are that I started moving too early.

Sort of like a wide receiver who has to make sure that he catches the football before he looks up field to run?

Kind of. In shooting, it all comes down to good follow-through. You have to have the discipline to see and make every shot.

When your shots miss left, what usually goes wrong, and how do you correct that?

Well, I have been working on accuracy very much over the last year and ensuring that my sights are on target before I break the shot. 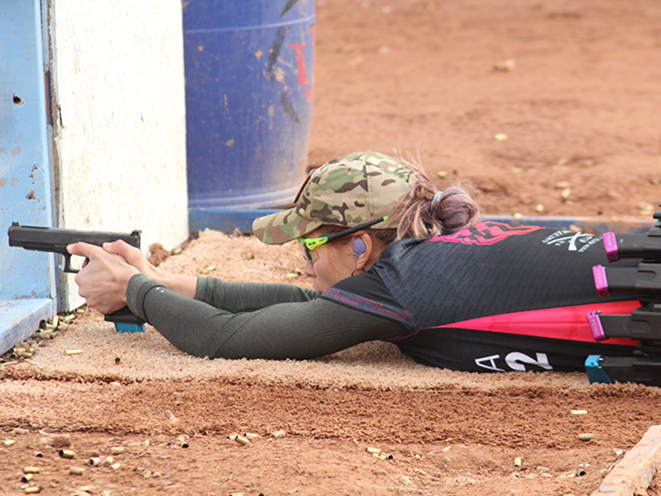 So, you’re saying that you don’t miss left anymore?

Well, I wouldn’t go that far! Everyone misses occasionally, but with a good sight picture, trigger control and follow-though, you’ll be fine.

When you hear the “shooter ready” command, what are you thinking about while you stand by?

Again, it depends what type of format I’m shooting, but generally I try to think about good trigger control. If I’ve done my training and preparation, all of my fundamentals will be in place. Then, it just comes down to proper execution.

How important is relaxation to promoting high-speed shooting?

It’s very important! You are never at your best when you’re tense. In addition to initial nerves, pressure can also build over time, so I try to be aware of that. For example, if I’ve been shooting well throughout an event, I don’t want to blow it on the last stage of the last day. When experiencing pressure, I use breathing exercises to stay calm. I then focus on trigger control to keep my mind where it’s supposed to be.

Are there any tactical advantages to having a purple gun, other than that it better matches your preferred clothing and accessories?

Well, I don’t know about any tactical advantages, but I like it. As a competitor, it’s good to be enthusiastic about your gear!

This article was originally published in “Combat Handguns” July/August 2017. To subscribe, visit outdoorgroupstore.com.