Is the Scout Rifle Concept the Best Personal Defense Gun in the World?

by Richard Mann
in Guns, Rifles
0

The scout rifle as we know it has its origins in the 1960s. At that time, the father of the modern technique of the pistol and Gunsite Academy (originally the American Pistol Institute) founder Jeff Cooper was working with various carbines, including the Winchester Model 1894, Mannlicher-Schoenauer and Remington Model 600. He was attracted to these rifles because of their handiness and suitability at filling a general-purpose role.

The Remington Model 600, to which he attached a forward-mounted, long-eye-relief riflescope, became his pick and what he began to refer to as “Scout I.” A decade or so later, Cooper codified and conceptualized the scout rifle. He envisioned the scout rifle as gun perfectly suited to someone working remotely and alone as a hunter or military scout. As Cooper saw it, the scout rifle was never intended to be used by a member of a fire team, and its forte was not volume fire. It was to be a rifle ideally suited to the general-purpose role. In other words, it should do almost anything anyone needs to do with a rifle—and do it well.

Cooper considered friendliness to be an important aspect of the scout rifle. That is, it should point naturally, be easy to handle and be ideally adapted to the snap shot. Further, he set forth an elemental description of how he believed the optimum scout rifle should be configured. And although he was not opposed to a semi-automatic, there was not a semi-auto light enough to meet his specifications, nor is there one now. Additionally, Cooper believed the scout rifle should be usable worldwide, and semi-automatics are forbidden in some locations. During a 1983 conference at Gunsite, the definition of a scout rifle was established.

It had to be a bolt-action rifle in .308 Winchester. (The 7mm-08 was considered acceptable where military cartridges could not be owned, and the .243 was allowed for folks who were recoil sensitive.) The rifle’s maximum length was 1 meter, and it had to wear a forward-mounted, low-powered, long-eye-relief optical sight. Ghost-ring sights were also required for backup duty. The rifle had to be fitted with a C.W. or Ching sling and possess a good trigger. Importantly, the rifle had to be lighter than 7 pounds with a scope, sights, a sling and an empty magazine installed, with an ideal weight of 6.6 pounds. Two more features were desirable but not mandatory: a provision for storing ammo on or in the buttstock and an integral, collapsible bipod.

Cooper wrote prolifically about the scout rifle concept with the hopes of convincing a manufacturer to build one. He also worked with gunsmiths at Gunsite to develop various prototypes. Of those, Scout II, or “Sweetheart,” was the most famous. It was the rifle used by an engineer from Steyr Mannlicher when he visited Cooper at his ranch in Paulden, Arizona, in 1990. That led to Steyr agreeing to design and manufacture a rifle meeting Cooper’s scout rifle specifications. Seven years later, the Steyr Scout rifle was introduced, and Cooper anointed it as the best personal weapon in the world.

The Steyr Scout rifle was a radical, innovative concept, and it could be argued that it’s the pinnacle representation of the general-purpose rifle. The problem was, at $2,100, it cost too much for the average guy who might consider a one-rifle answer. Folks with that kind of cash seemed to prefer rifles built for specialized tasks and pursuits. So, as ideal as the Steyr Scout was, sales languished, and it seemed only those worshiping Col. Jeff Cooper became Steyr Arms’ customers.

Savage Arms entered the scout rifle market with its take on Cooper’s concept, and although the company’s rifle was moderately successful, it was really nothing more than a standard Savage bolt action with a provision for the mounting of the forward optic, which became known as a scout scope. The high prices of the Steyr, the lack of uniqueness of the Savage and the new-millennium madness surrounding the AR-15 seemed to push the scout rifle concept into extinction.

But in 2012, Ruger surprised the world by introducing the Gunsite Scout Rifle, or GSR. Admittedly, the Ruger GSR does not adhere to every element of Cooper’s scout rifle concept, but according to Gunsite instructor Ed Head, who worked with Ruger on the project, that was not the intent. Ruger’s goal was to offer a modern general-purpose rifle based on the scout rifle concept—a rifle that would have broad appeal. It could not have been more successful. The Ruger GSR, in all of its many variants, is one of the best-selling rifles in the company’s line.

We can speculate about why, after 20 years, there seems to be a scout rifle revival. It could be that many folks interested in the utility of a general-purpose rifle have become bored with the AR platform. Maybe from a prepper or survivalist standpoint, the lack of complexity associated with a simple bolt-action rifle makes more sense. Or, perhaps Cooper, his concept and Steyr were about two decades ahead of their time. Whatever the reason, interest in scout-style rifles is at an all-time high.

Today, a scout rifle enthusiast can choose from the Steyr Scout rifle at its new price of $1,699, the Ruger Gunsite Scout Rifle at about $1,139, the Savage 11 Scout at $818, or the Mossberg MVP Scout at $818. And not only are there more commercial scout rifles than ever, but there’s also a suitable selection of scout rifle accessories, including speed slings and scout scopes.

Because of the newfound popularity of scout rifles, and because 2016 was the 40th anniversary of Gunsite Academy, it seemed ideal to again have a conference to discuss and help further understanding of the concept. I worked with Gunsite instructor Il Ling New, chief operating officer Ken Campbell and the rest of Gunsite’s incredible staff to put a program together. Unlike the first conference, which was intended to define parameters, this was more of a revival. We invited manufacturers, gun writers and scout rifle experts to spend three days training, one day competing and testing, and a final day discussing the state of the scout rifle as it stands today.

Our goal was to help manufacturers make better scout rifles and inform the uniformed about the immense utility of the guns. What is that utility, and how can a rifle conceptualized so long ago have a place in the modern world of firearms? Sheer simplicity is a major aspect.

The .308 Winchester can accomplish most of what any rifle shooter needs. I’ve used it to shoot critters as small as prairie dogs and with flawless results on elk, moose and a variety of large African game. For many years, the .308 Winchester was also considered the ideal precision and even long-range rifle cartridge. Inside 800 yards, the .308 Winchester performs very well, and let’s face it, at that distance, most of us can’t hit anything smaller than an outhouse with regularity.

Although it’s not the primary qualifying element of Cooper’s concept, the long-eye-relief scout scope has become emblematic of the scout rifle. And even though ultra-compact reflex and red-dot sights seem to be all the rage, those who have tried them realize the limitations imposed by the lack of minimal magnification. The scout scope, with its limited or variable magnification, offers an ideal balance of snap shooting and medium- to long-distance capabilities like no other optic. Remember, the concept was for a general—not specific—purpose rifle.

Other features of commercial scout rifles are also appealing, such as their reserve ghost-ring sights, threaded muzzles to accept suppressors, compatibility with high-capacity detachable magazines, and their ruggedness and reliability. The modern scout rifle coincides with the popular prepper mindset. They are Katrina rifles, survival rifles or even apocalyptic end-of-days guns that are uncomplicated to operate, service and shoot.

Compactness and light weight are also prime hallmarks of the platform. Admittedly, some of the modern commercial scout rifles fall outside of Cooper’s weight and length restrictions, but for the most part, they embrace the spirit of the concept. They make for good truck or UTV rifles that are easy to transport, comfortable to carry and swift to get into action.

Aside from the practical application and common sense of the concept, scout rifle accessories that were difficult to find or almost non-existent a decade ago are now readily available and in more variations. Burris, Hi-Lux, Leupold, Vortex and Weaver offer scout scopes of fixed or variable power. Andy’s Leather and Galco offer excellent renditions of the Ching sling or similar speed slings. And Hornady has a wide selection of ammunition ideal for any scout rifle application, from hunting to personal defense to extended- range shooting. 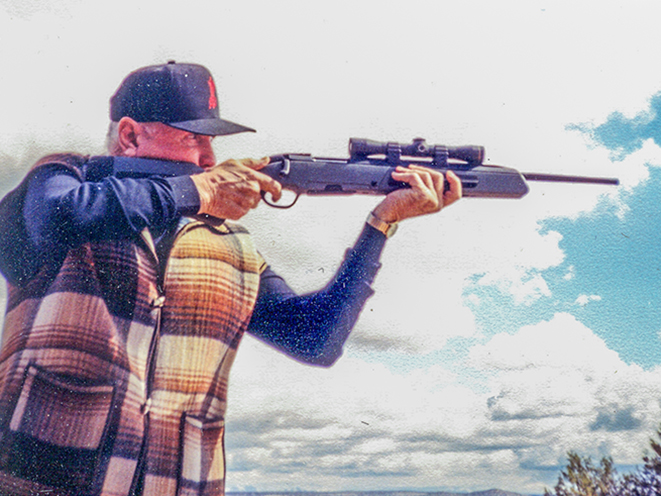 The world has changed from when Cooper envisioned the scout rifle and when Steyr and Savage first offered interpretations of the design. A world that once seemed stable has transitioned into one of uncertainty, and its inhabitants have learned that in times of crisis, they are their own first and possibly only line of defense. A scout rifle fills that niche, and it’s a weapon system that can be legally owned and taken almost anywhere in the world.

No wonder the scout rifle has a revived appeal. It was clear at the 2016 Scout Rifle Conference that the learned participants in attendance found the concept ideally suited to the modern world. In fact, some doubters left with their minds changed. I believe we will continue to see new interpretations and even an evolution of the original concept. Scout rifle purists might scoff at the slightest deviation from Cooper’s vision, but in the end, it’s all about the shot and the rifle that can help you make the widest variety of shots in the best, easiest way. The scout rifle is here to stay.

Editor’s Note: Richard Mann’s The Scout Rifle Study offers a comprehensive look at the history of the scout rifle and its place in the new millennium. This is the first major firearms publication to be offered in a free-access web format. Not only is this revolutionary, but it also allows for a host of features not supported in the print and e-book format. For more information, check out thescoutrifle.com.

This article was originally published in “Ballistic” Fall 2017. To order a copy, visit outdoorgroupstore.com.