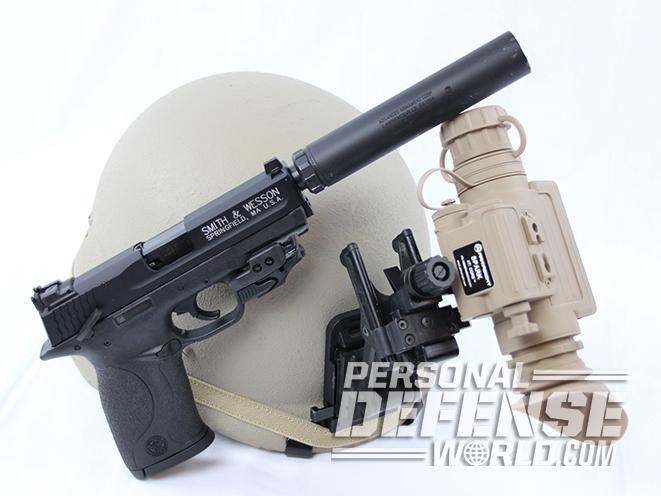 1 of 10
3 Ways to Soup Up a S&W M&P22 Compact for Nighttime Plinking
“If you want to shoot cheaply, there is nothing better than a .22 LR pistol, and one of the best I have handled is the Smith & Wesson M&P22 Compact.” 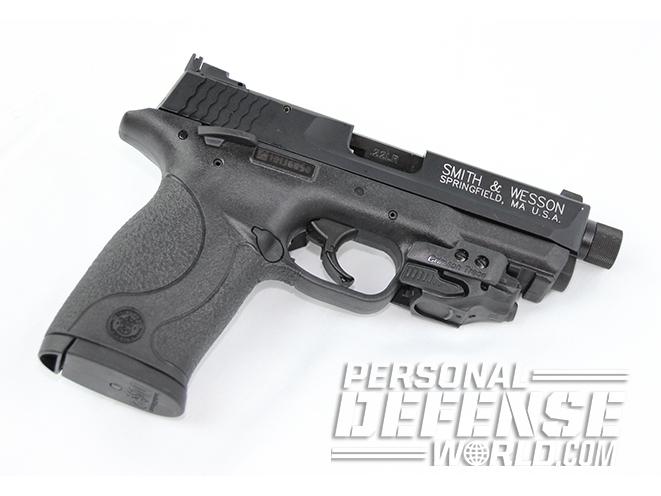 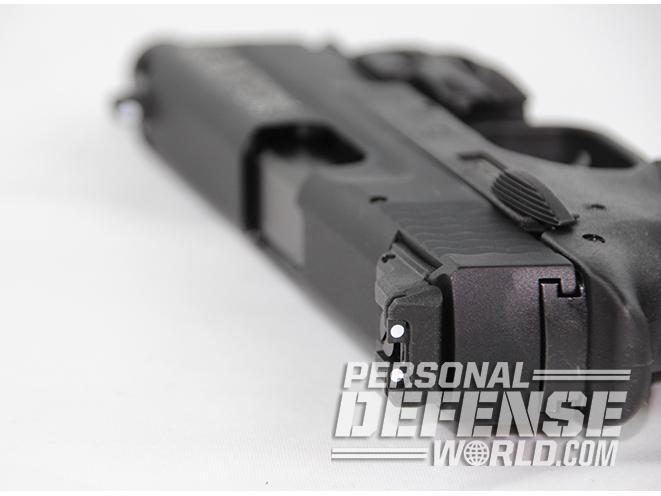 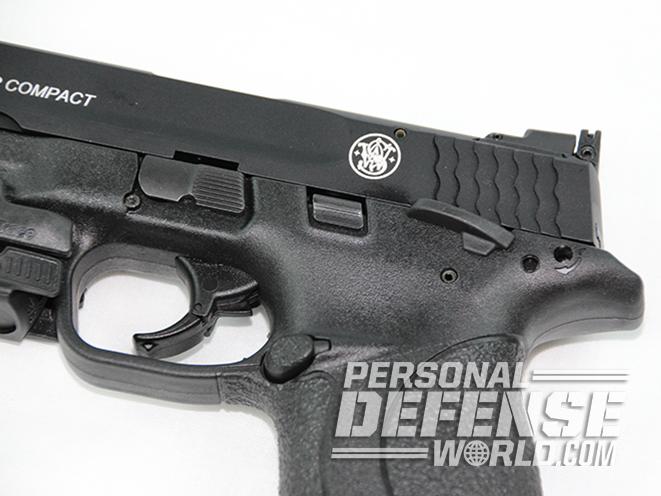 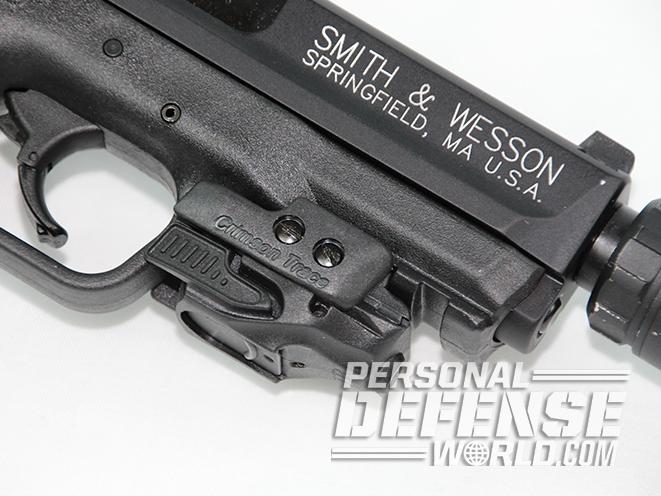 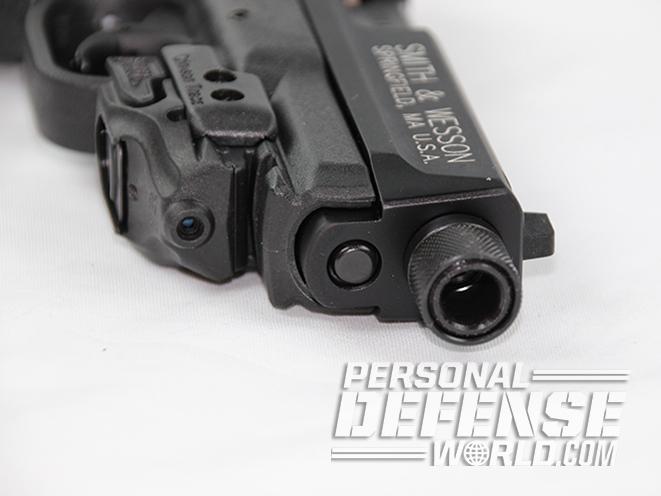 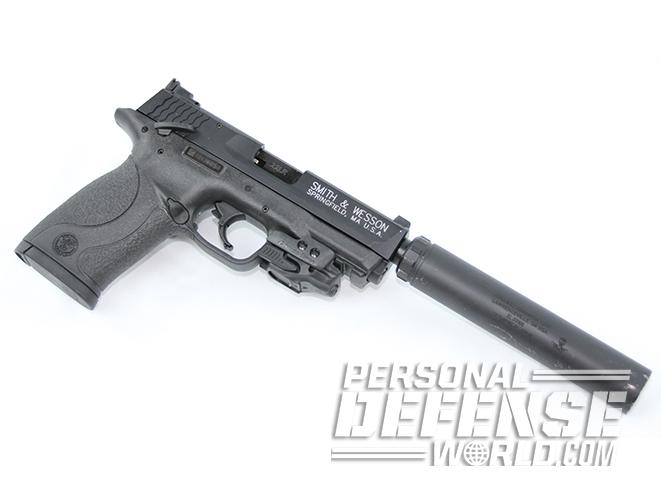 7 of 10
3 Ways to Soup Up a S&W M&P22 Compact for Nighttime Plinking
The AAC Element 2 weighs only 4.1 ounces thanks to its titanium construction. 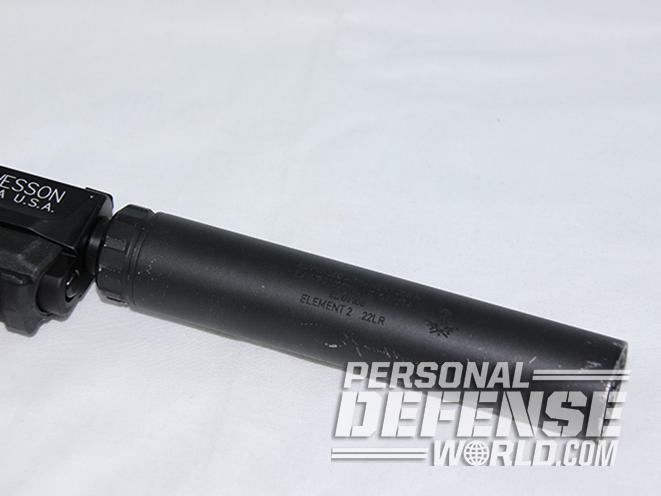 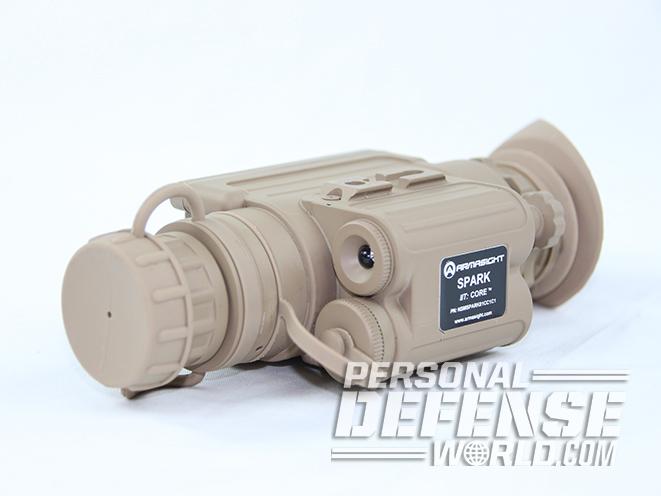 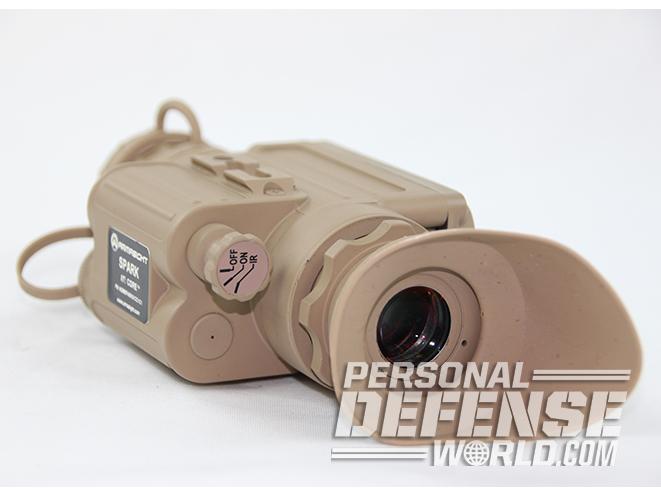 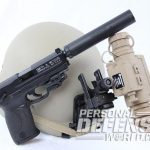 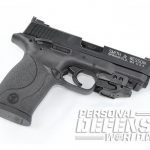 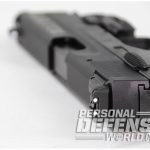 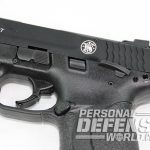 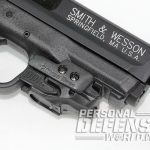 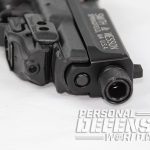 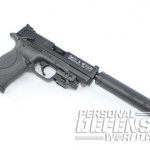 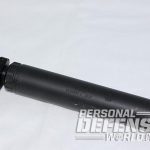 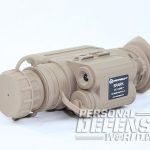 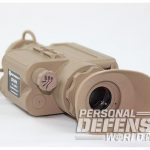 My first exposure to night-vision gear was in using an old AN/PVS-4 weapon sight. This was a second-generation “starlight” optic, and it was only slightly smaller than a roll of paper towels. More recently, I was able to shoot a suppressed 9mm Glock with an infrared laser sight and Gen 3 night-vision goggles at a Crimson Trace event in Oregon. The feeling was a bit surreal, sort of like a virtual- reality video game. This experience was so much fun that I decided to recreate it at my home range at a lower cost. If you want to shoot cheaply, there is nothing better than a .22 LR pistol, and one of the best I have handled is the Smith & Wesson M&P22 Compact. As an added bonus, the latest version comes suppressor-ready with a preinstalled thread adapter. A suppressor adapter kit is available for anyone who already owns this pistol as well.

The M&P22 Compact is 15-percent smaller than the standard M&P pistol, but it retains the look and feel of its larger centerfire version. Ergonomically, it fits the hand very well and is a pleasure to shoot. The M&P22 Compact is a polymer- framed pistol, but it uses a single-action-only, internal-hammer method of operation as opposed to a striker- fired system. It is also very lightweight at just 15.3 ounces unloaded thanks to its aluminum alloy slide.

The pistol’s 3.5-inch, carbon-steel barrel makes the accuracy on this little pistol outstanding as long as you do your part. My only complaint was that I was emptying the included 10-round magazines too fast. The high-profile, three-dot sights are very easy to acquire, and the rear sight is fully adjustable for windage and elevation. The polymer frame also features a Picatinny rail on the dust cover, which makes it very easy to attach a light or laser.

The S&W M&P22 features a magazine safety so that the pistol will not fire without a magazine securely inserted. Given its single-action operation, I understand why this extra safety feature is included, and it is a common feature in many semi-automatic pistols, but I am personally not a fan. In the case where you have lost your magazine, the pistol becomes completely unusable. This is, however, less of a concern with a plinking pistol than one used for self-defense.

There is also an ambidextrous thumb safety that is very easy to operate, and the magazine release is reversible for left-handed shooters. The slide release is rather smallish and best relegated to the slide-stop function. Unlike some other .22 pistols, disassembly of the M&P22 Compact is a breeze with a convenient takedown lever on the left side of the frame and a captive recoil spring assembly. You will have to remove the thread adapter, however.

For the laser unit, my first choice was an older Crimson Trace CMR-201 IR Rail Master. This unit has a black polymer body that meshed perfectly with the M&P22 Compact and features easy ambidextrous push buttons. The laser also came with several adapters to fit on most any rail system. With the Picatinny adapter installed, the Crimson Trace unit can easily be moved from the pistol to a rifle if so desired.

This unit added very little in terms of weight and was very compact. The included lithium battery has a constant-on runtime of four hours, but the unit will automatically deactivate after five minutes to conserve battery life. This is actually very handy in an IR laser since you have no way of knowing when it is on or not. The laser cannot be seen without the use of night vision, which makes sighting the laser a bit of a challenge. Fortunately, Crimson Trace shipped the unit already sighted in at 50 feet.

The Rail Master unit locked in place securely and was easily adjusted for windage and elevation using the supplied Allen wrenches. I found that the unit I received needed only minor adjustments. And while Crimson Trace recently discontinued this specific model, similar offerings are still available.

Since I planned on shooting at night and didn’t want to alarm my neighbors, a suppressor was a necessity, and one of my favorite .22-caliber cans is the Element 2 from AAC. This adds just 4.1 ounces to the pistol thanks to its titanium construction, which keeps the overall package very light and easy to handle. The bit of extra weight soaks up some of the already light recoil, and since the extra weight is all at the front, it also keeps the muzzle on target with virtually zero climb. This makes shooting fast and staying on target extremely easy.

This suppressor is only an inch in diameter, so it keeps the overall package compact, and it has a tough Cerakote finish and stainless steel baffles for durability and corrosion resistance. It can be disassembled for cleaning, which is not something you need to do very often, but .22 LR rounds shoot pretty dirty, so the occasional cleaning is a good idea.

Of course, the main advantage is in reducing the noise levels associated with shooting. Here the Element 2 is superb with a rated sound reduction of 41 decibels. The .22 LR cartridge is not a major noisemaker normally, and unsuppressed sound levels can range from 90 to 120 decibels depending on a variety of factors, such as ammunition and the type of firearm being used. A 40-decibel reduction brings the sound level down to that of normal conversation. In fact, shooting the .22 pistol suppressed sounds barely louder than shooting a CO2 pistol.

The final piece needed for this project was the night-vision device, of course. Night-vision devices go back to World War II and have gone through several improvements, often called “generations.” This doesn’t include thermal imagers, which are different beasts entirely, although really high-end night-vision optics will combine both thermal and IR and can cost as much as a new automobile. The main difference between Gen 1, Gen 2, Gen 3 and above is the quality of the image and the device’s ability to use ambient light. In total darkness, you can also use an IR light source that works like a flashlight.

The goggles I used at the Crimson Trace event were very high end and cost close to $4,000. But with the laser, any night-vision device will work, and a great place to find affordable night-vision gear is at Optics Planet. This online superstore sells a lot more than just optics, and the selection is outstanding. I have used a very low-end night-vision monocular, and it worked well for basic scanning, but I needed something that would provide a better image for clear target identification.

The best of the affordable night-vision optics I found, which was also helmet and weapon mountable, is the Spark CORE (Ceramic Optical Ruggedized Engine) from Armasight. While technically a Gen 1 optic, this unit pushes the envelope of what is possible for the technology. While traditional Gen 1 devices use glass tubes that are both fragile and create a good deal of edge distortion and low resolution, the CORE system uses a ceramic compound fused with metal alloys like those used in Gen 2 and Gen 3 devices.

The result is that you get a lot more light-gathering ability, a very crisp and sharp image with no edge distortion, and nearly double the image resolution of standard Gen 1 devices. The unit is very compact, weighs less than 13 ounces, is completely waterproof and has simple controls. The built-in IR illuminator is supposed to work out to a few yards, but outdoors I found it effectively improved my night vision beyond 50 yards, especially under heavy foliage. The unit is extremely economical considering its high-quality imaging and when compared to Gen 2 and Gen 3 devices.

It is indeed a bit of an eerie feeling shooting targets at night with no visible light source, but nighttime is when the raccoons raid my garbage cans. This time I will be ready for them. 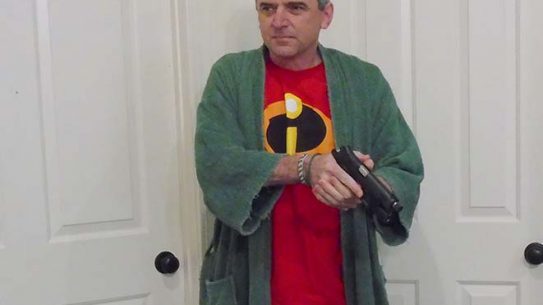 Nobody wants to be the victim of a home invasion, but there are precautions...