Taurus took dead aim at America’s growing market for concealable semi-autos when the company introduced its “Slim” sub-compacts in 9mm and .40 S&W. These pistols are about the same size as a snub-nose .38 Special revolver, but they are more powerful and carry more rounds on board. This gives the Slims and other semi-auto subcompacts a clear advantage over five- and six-shot revolvers, especially when you consider the Bureau of Justice Statistics (BJS) report indicating that 20 to 35 percent of assaults involve multiple assailants.

The market for small semi-autos is very competitive. To attract and keep customers, manufacturers must offer quality guns at affordable prices. Therefore, gun makers like Taurus routinely use high-quality yet inexpensive materials like space-age polymers along with ultra-modern manufacturing techniques like metal-injection molding and multi-axis, high-speed CNC milling to control material and labor costs. The result is a reasonably priced pistol with very good quality control.

At the same time, according to the BJS, nearly half of all assaults occur at night. Given this, basic capabilities aren’t enough, and gun owners need to be able to see their sights in low light. This is why a number of companies offer aftermarket sights with tritium inserts. One such company is TruGlo, which makes a set of Tritium Pro night sights that significantly expand the low-light capabilities of the 9mm Taurus 709 Slim.

The Taurus 709 Slim is an attractive eight-shot 9mm that fits well in the hand and points naturally. It has a number of interesting features that set it apart from other similar subcompact semi-autos. Perhaps the most unique feature is the striker-fired ignition system, which has a second-strike capability. If the gun fails to fire, the shooter has the option of either pulling the trigger a second time to see if the primer will ignite or racking the slide to chamber a fresh round before pressing the trigger once more. The trigger has quite a long pull that stacks before it breaks between 6.5 and 7 pounds. The break is a bit spongy, but that did not affect its practical accuracy in testing.

The 709 Slim has two other features not frequently seen on small striker-fired pistols. The first is a frame-mounted manual safety. Like the manual safety on a1911, disengaging it requires the shooter to press downward with the thumb. This manual safety is not ambidextrous, and it’s located on the left side of the frame, under the cocking serrations at the rear of the slide. When the thumb safety is disengaged, a red dot appears above the safety lever, indicating that the 709 is ready to fire.

Another significant feature is a polymer rear sight that’s adjustable for both windage and elevation. Most small semi-autos have fixed sights. Other useful features of the 709 include an enlarged and undercut triggerguard, a loaded- chamber indicator, a reversible magazine release and memory pads on the dust cover to hold your trigger finger outside of the triggerguard. Finally, there are three additional safety features: a firing pin block, a blade-type safety in the trigger face and an internal lock that is operated by a key.

Once it was field-stripped, I examined the interior of the Taurus 709 Slim for signs of poor workmanship like tool marks, parts with uneven contours, irregular lines and rough, unfinished surfaces. Everything looked very good. The polymer grip frame was firm and rigid; the frame rails and all of the other metallic inserts were properly formed and placed. Nothing rattled when the frame was shaken, and all of the springs appeared to be properly tensioned. The same can be said for the stainless steel slide, except that the striker rattled as it should, indicating that the firing pin channel was clean. Moving on to the magazine, the spring was strong, the follower moved freely, and the exterior and interior were cleanly finished and well formed. Everything appeared to be tight and well fitted, including the barrel and captive recoil spring assembly.

TruGlo’s Tritium Pro sights are designed for faster sight acquisitions under all lighting conditions. To improve daytime use, the tritium insert in the front sight has a wide white Focus-Lock ring around it that is highly visible, and the rear sight has a U-shaped notch that makes it very fast to pick up the white ring on the front sight. There are no white rings on the rear sight to distract the shooter from focusing on the front sight. In low light, the tritium inserts provide a classic three-green-dot pattern that should be familiar to most shooters who have used night sights before. TruGlo uses Swiss tritium here and provides a limited 12-year warranty on this product.`

In addition, these sights have a number of features that most shooters will find desirable. The body of the Tritium Pro units are made of steel and coated with TruGlo’s Fortress Finish, which resists scuffs and scratches. Pistols used for personal defense can take quite a bit of abuse, and steel sights can tolerate rough treatment and still hold their zero. The use of steel also gives the Tritium Pro rear sight sufficient strength to serve as a cocking ledge in case of an injury. Shooters who have been trained to use a cocking ledge have the advantage of being able to cycle the slide one-handed and keep the gun running if the other hand is injured.

Given all of these advantages, it was an easy choice to upgrade to the Tritium Pro sights, and I had gunsmith Jamie Zern at the Florida Gun Exchange install them. 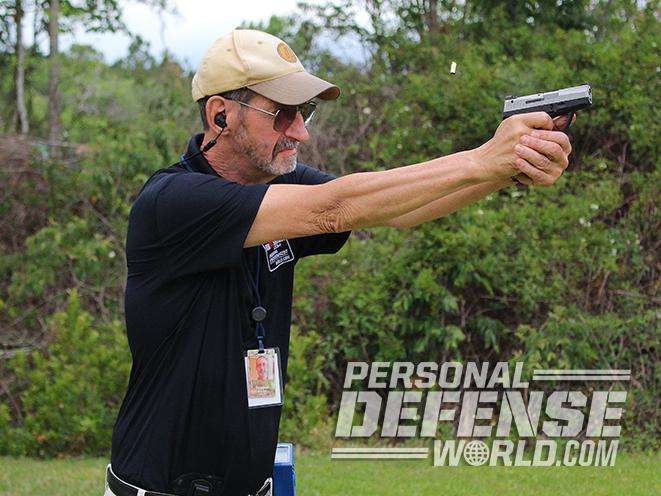 I put the Taurus 709 Slim through its paces on the action range at the Flagler Gun & Archery Club near Bunnell, Florida. I tested its accuracy with four different loads from Freedom Munitions, Hornady, PolyCase and Winchester.

Initially, the 709 exhibited a limited number of misfeeds. These became less common as the tests progressed. The pistol most likely just needed to fire a couple of hundred rounds to break in. On the other hand, it may be a pistol that simply prefers one type of ammunition over another. Since the American Gunner ammunition from Hornady shot without incident in the 709, one might fire the pistol with that load for a couple of hundred rounds before reassessing its reliability with other ammunition.

As with many short-barreled 9mm pistols, the velocities with the four loads were anywhere from 5 to 10 percent less than they would be from a gun with a 4-inch barrel. But this isn’t really significant in the overall scheme of things. For example, the Winchester rounds produced an average of 1,120 fps in the 709 instead of the rated velocity of 1,200 fps using a 4-inch test barrel. Therefore, the short- barreled 709 still produces quite a bit more velocity and energy than a .38 Special +P load with a similar- weight bullet fired from a wheelgun with a 2- to 3-inch barrel.

Since the Taurus 709 Slim is designed to be a close-range defense pistol, my accuracy tests focused on tactical accuracy rather than benchrest performance. Therefore, the accuracy test simulated five precise shots with each load from an isosceles stance at 7 yards. The four resulting groups were all in the 1- to 2-inch range, which is quite sufficient for personal defense at short distances. The groups were a bit low and to the left, but this could easily be corrected by moving the rear sight slightly to the right and choosing a load with a heavier bullet that shoots a bit higher.

Finally, I ran a speed drill from the holster to test the pistol’s handling characteristics. This involved standing at the 7-yardline, taking a lateral step off the line of force while drawing and then firing five shots at a target depicting two assailants. I shot the assailant on the right three times as part of a body armor drill, and the one on the left twice in the head. My average time for three repetitions was 9.68 seconds. My average score was 40 out of 50 possible points. Throughout the accuracy testing and the tactical drills, the TruGlo sights were very visible and quick to acquire. 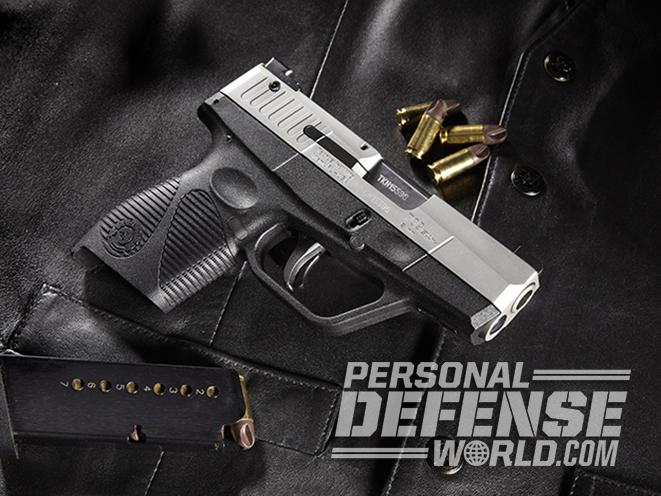 The Taurus 709 Slim is a well-made and accurate close-range defensive pistol. The addition of TruGlo Tritium Pro sights significantly increased its tactical utility, and together, the gun and sights would make a great combination for anyone looking for a CCW for both day and nighttime usage.