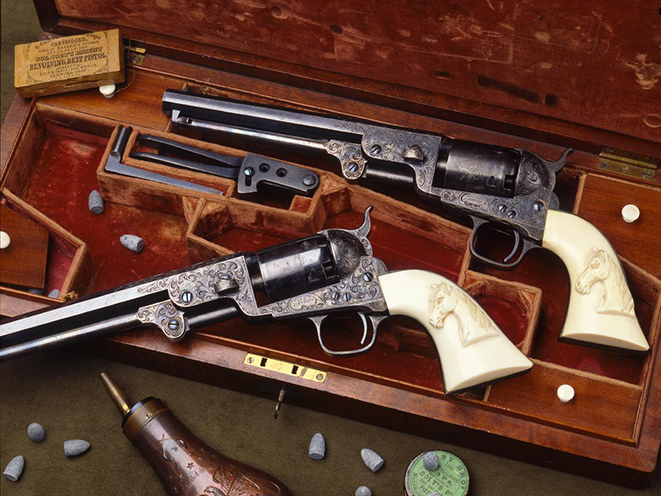 1 of 8
Photo by Buffalo Bill Center of the West
Samuel Colt’s Model 1851s
Samuel Colt (1814-1862) is not necessarily an Old West legend in the traditional sense, especially since he died in 1862. However, it’s a perfect way to start off this list because his revolver idea led to the development of the handgun that “won the West.” Colt was a controversial and eccentric character during his lifetime. He developed the first revolving firearm patent in the United States. However, his company was plagued by financial troubles. His original revolver, the Paterson, was adopted by the Texas Rangers and inspired Samuel Walker to convince Colt to make a larger-bore revolver named after him. These cased Colt Model 1851 Navy revolvers were engraved by famous Colt engraver Gustave Young. (Note that the ivory grips are not original to the firearms.) While this pair belonged to Samuel Colt, he did not have them for long, since he died a short two years later from gout. After his death, his name would live on as a Western legend with the development of the Peacemaker, the firearm of choice for outlaws, lawmen and showmen. 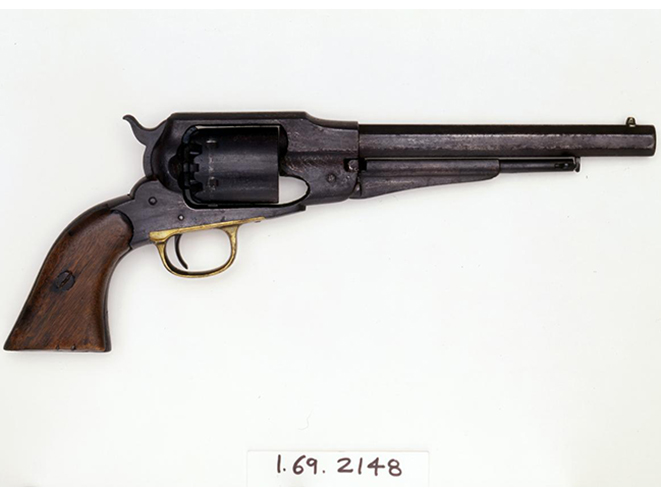 2 of 8
Photo by Buffalo Bill Center of the West
Buffalo Bill’s Remington Army
William F. “Buffalo Bill” Cody (1846-1917) is one of the most iconic showman in Western history. While he is remembered as an international celebrity, his journey into the West began when he moved to “Bleeding Kansas” in the 1850s. He served in the 7th Volunteer Kansas Cavalry during the Civil War and scouted for the United States Army during the Plains Indian Wars. Cody earned his nickname hunting bison to procure meat while working for the Goddard Brothers on the Kansas Pacific Railroad. He also became the subject of dime novelist Ned Buntline’s stories, performed in stage shows and ultimately created Buffalo Bill’s Wild West. There are many guns associated with his stage life; however, this Remington Army revolver reflects his time as a soldier. On July 17, 1876, at the Battle of Warbonnet Creek, Buffalo Bill killed Cheyenne warrior Yellow Hair. This gun, originally Yellow Hair’s, was taken by Cody. Cody used a plethora of revolvers for his stage performances, but this Remington is representative of another chapter in his story. Buffalo Bill essentially laid the foundation for Western films and the mythology that we know and associate as intrinsically American. 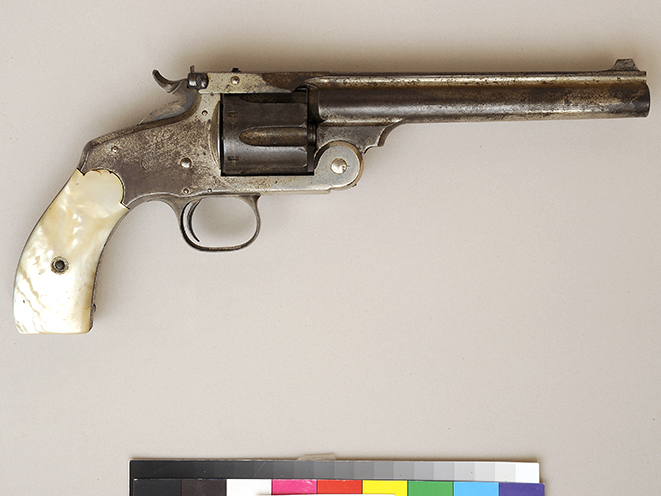 3 of 8
Photo by Buffalo Bill Center of the West
Annie Oakley’s Smith & Wesson No. 3
Phoebe Ann Moses (1860-1926), better known as Annie Oakley, was born in Ohio. Her younger life was plagued by misfortune. After her father passed away, she was sent to work for a family who terribly mistreated her. However, she was reunited with her family and found her calling. She initially hunted to support her family, but by the age of 15, she had paid off her mother’s mortgage and won a shooting competition against acclaimed exhibition shooter and future husband Frank Butler. The pair joined Buffalo Bill’s Wild West in 1885. This marked a turning point in Oakley’s career and a shift in dynamic for the couple. Butler faded into the background and helped manage Oakley’s career. She shot many different types of firearms during her lifetime, including this Smith & Wesson No. 3 revolver. It is believed she ordered three of these revolvers. Oakley and Butler later left Buffalo Bill’s Wild West in 1901. But Oakley continued to perform until the couple died, both in November of 1926.

4 of 8
Photo by Buffalo Bill Center of the West
Wild Bill’s Colt 1851 Navy
James Butler “Wild Bill” Hickok (1837-1876) was a legendary gunfighter. He held many positions throughout his short life. He was known as a lawman, gunfighter, showman and gambler. Hickok rose to fame after he engaged in a gunfight in 1861. This tale was later mythologized in Harper’s New Monthly Magazine. About a decade later, he accidentally killed his own deputy. Hickok also performed with his friend Buffalo Bill in a stage play, but he did not go on to perform in the Wild West. Toward the end of his life, he took to gambling—a vice that would result in the end of his life. In 1876 in Deadwood, South Dakota, he was shot and killed while playing poker. This Colt Model 1851 Navy revolver is one from a pair he owned. This revolver was used to pay his burial expenses after he was murdered. 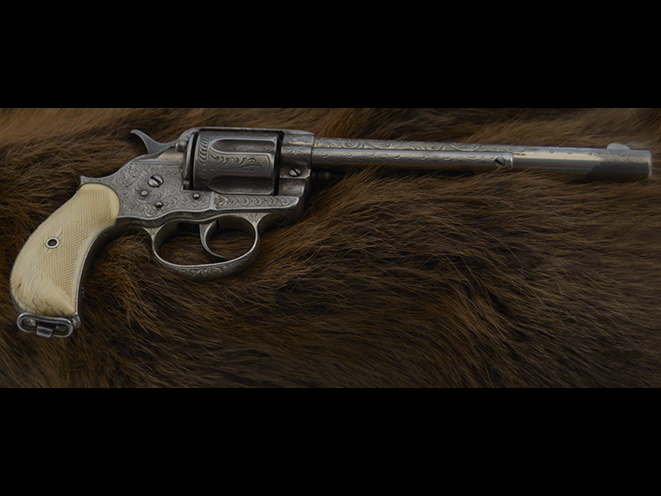 5 of 8
Photo by Buffalo Bill Center of the West
Tom Tobin’s Colt Model 1878
Tom Tobin (1824-1904) may not be as well-known as the others on this list, but in his time, he was no less a legend. Tobin, like the others here, was known for many careers. He was a fur trapper and bounty hunter, but he’s most remembered for his involvement in the capture and killing of the Espinosa outlaws. The Espinosas were two brothers who tortured the San Luis Valley after the Mexican-American War. Tobin was hired by the U.S. government to be dispatched with soldiers to find the brothers. At camp one night, he snuck out and found them on his own. Per legend, he killed and decapitated them. He then carried their heads back to camp in a sack and rolled them across the floor of the commander’s office. Tobin was hired by the government for his skills on multiple occasions. As a thank you for his service, he was presented this Colt Model 1878 “Frontier” revolver. Major William Dunn presented the gun to him in 1883. 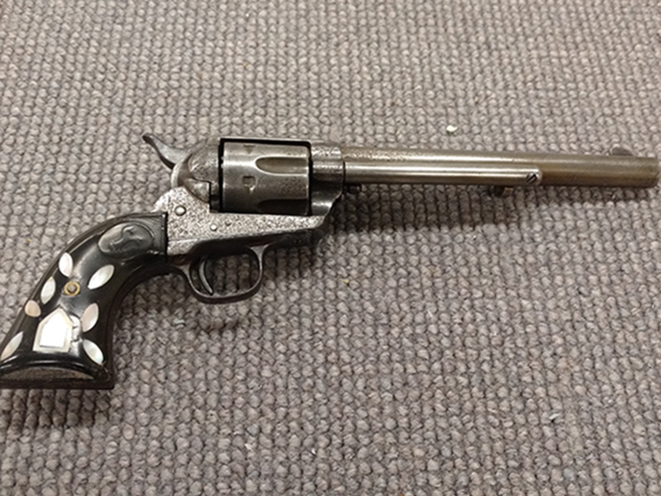 6 of 8
Photo by Buffalo Bill Center of the West
Doc Carver’s Peacemaker
William Frank “Doc” Carver (1851-1927), a dentist by trade, was an exhibition shooter in the late 19th century. While he tried to put distance between his medical profession and his shooting career, the name stuck. After relocating in the West, Carver met Buffalo Bill and other significant shootists. There, he began to hone his own craft. In 1876, Carver moved to California. He had a reputation for challenging well-known shooters and winning. Most notably, Carver worked with Buffalo Bill to create a traveling show called “Wild West: Hon. W.F. Cody and Dr. W.F. Carver’s Rocky Mountain and Prairie Exhibition.” The two never really got along, however. Cody went on to create Buffalo Bill’s Wild West and Carver, a less successful version. This Colt Single Action Army revolver is engraved to “WFC”—not to be confused with Cody, who shares the same initials. 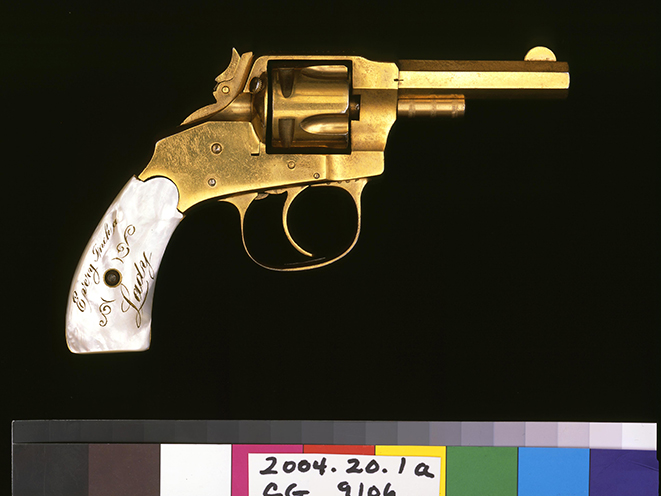 7 of 8
Photo by Buffalo Bill Center of the West
Cassie Waters’ Hopkins & Allen XL3
Another relative unknown on this list is Cassie Waters. While she may not be known outside of Cody, Wyoming, her profession as a madame is one of Western legend and lore. Waters moved out west with her father. She quickly married; however, her husband passed away. After his passing, she opened a brothel. While a seedier profession, prostitution played a significant role in the creation and maintenance of towns in the West. And many brothel owners like Cassie Waters were considered respected businesswomen who contributed to local politics and town affairs. This Hopkins & Allen revolver has mother-of-pearl grips that read, “To my friend Cassie,” and “Every inch a lady.” This gun was given to her by either a politician or her doctor. After Cassie’s death, her house was turned into a restaurant, and it remains as a steakhouse and tourist attraction in the small town of Cody. 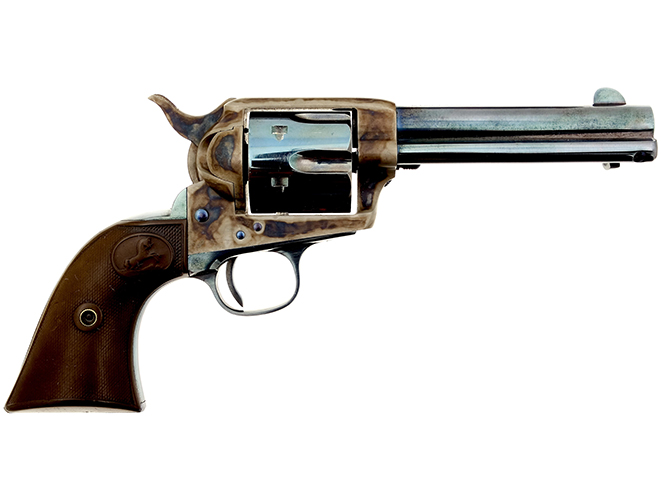 8 of 8
Photo by Buffalo Bill Center of the West
Gary Cooper’s Peacemaker
Our list ends with a gent who played many an Old West legend on TV. Gary Cooper (1901-1961) was an American actor who starred as the lead in many movies, from silent films into the sound era. And like John Wayne and other actors in the same genre, Cooper kept the Western mythology alive in the middle of the 20th century. This revolver was used by Cooper on multiple films. It is believed that he used it to film High Noon (1952), a Western with a troubled anti-hero. The revolver, while an original that was made in 1894, was refinished and one of several used on the set. 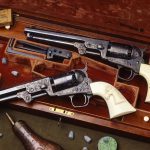 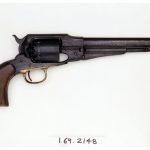 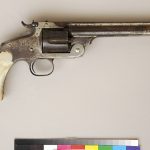 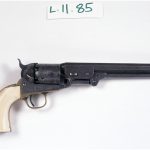 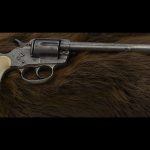 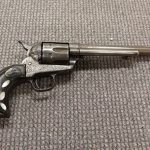 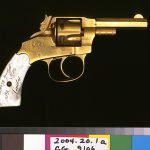 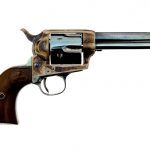 The revolver is to the West as apple pie is to America. The six-shooter is an iconic symbol of not only the historic West, but also Western mythology and popular culture. Oftentimes, old west revolvers themselves can be about as famous as the legendary men and women who carried them.

This piece of revolving technology does not predate American expansion into the West. In fact, it was not even developed in the region. Samuel Colt, a young eccentric, first patented the revolver in 1835 in England. His first revolving patent was granted in the United States on February 25, 1836. Patent 9430X began the arms race to develop revolver technology. However, while Colt ignited the fire, he was not alone. Many young designers were chomping at the bit to break into the revolver market. When Colt’s patent expired in the mid-1850s, it opened the door for rigorous competition from other manufacturers, such as Smith & Wesson and Remington.

From outlaws to lawmen, inventors to exhibitionists, there are a multitude of revolvers associated with Western figures. These famous and even infamous men and women may have all passed away, but their revolvers still stand in museums and collections as a testament to their lives and legends. Let’s look at a few of these old west revolvers, which can be found at the Buffalo Bill Center of the West in Cody, Wyoming. 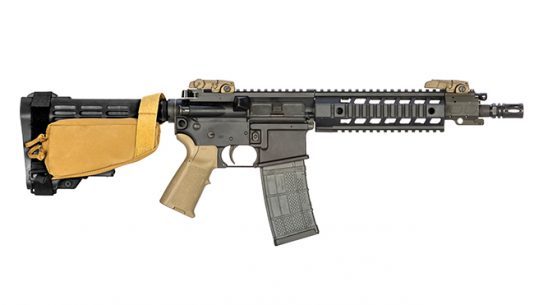