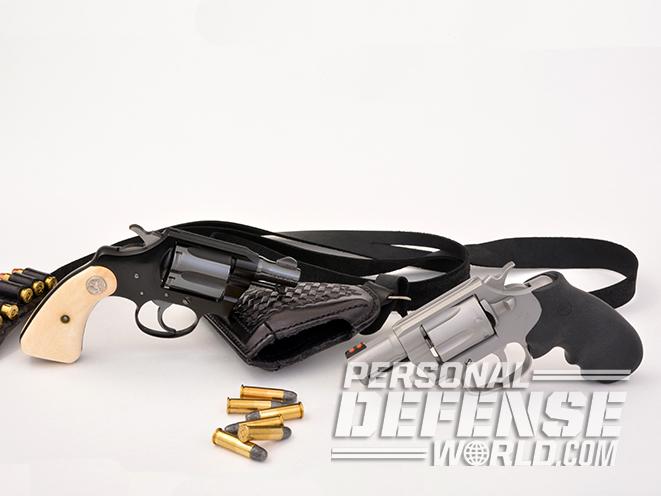 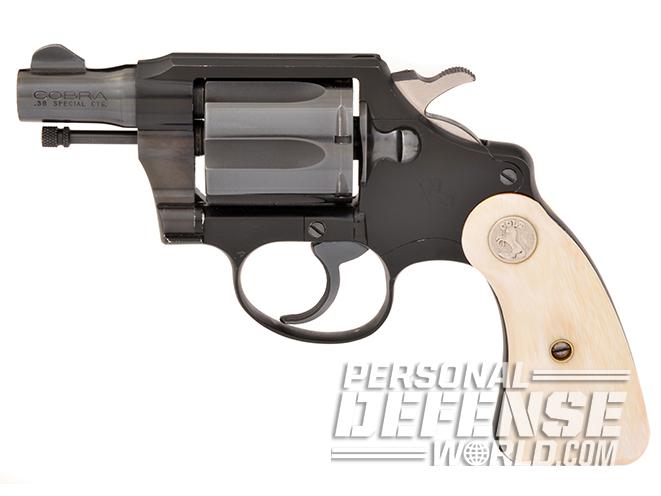 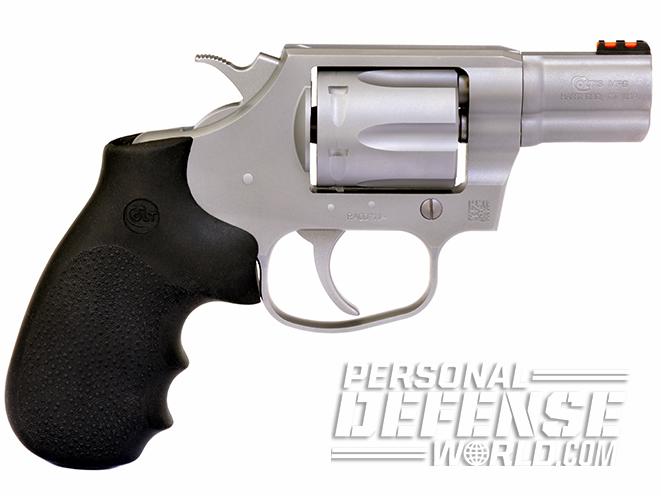 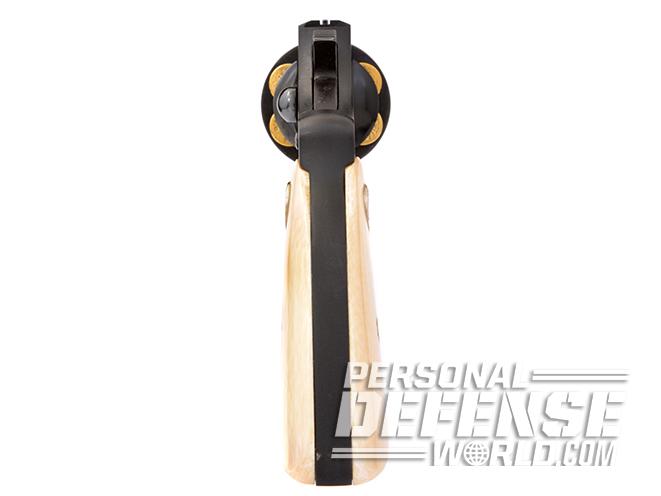 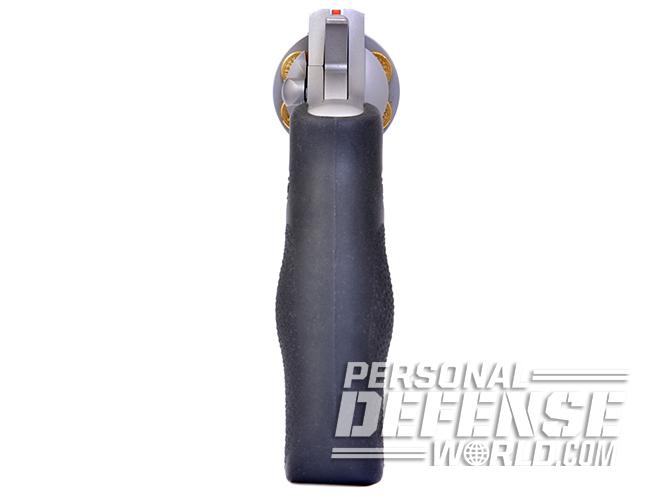 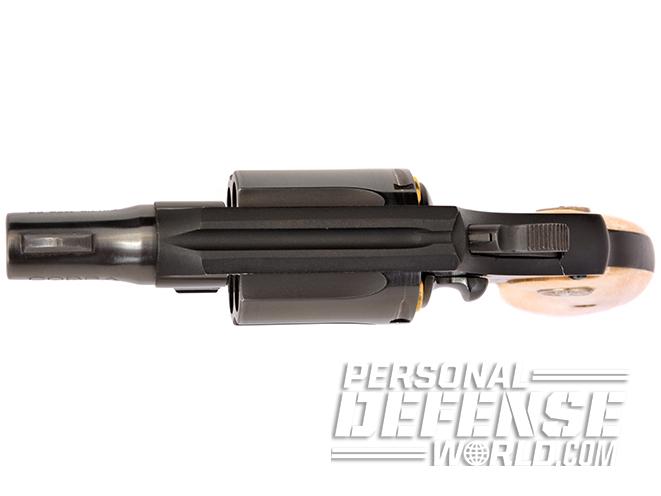 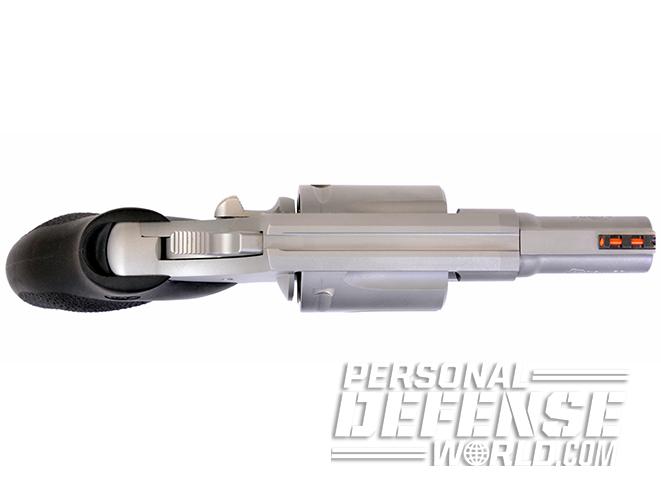 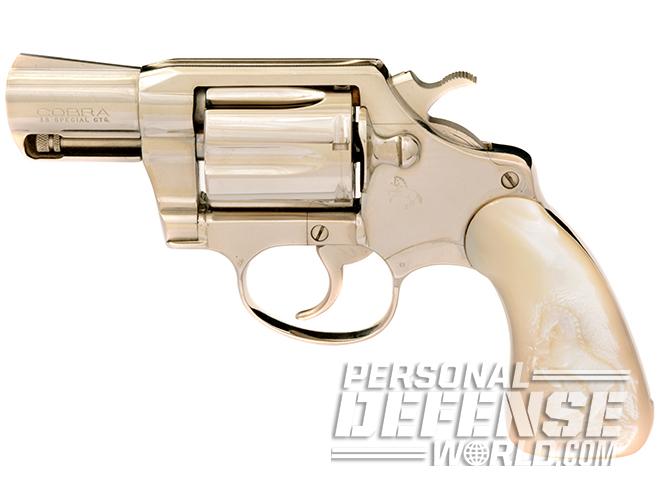 8 of 9
Original Colt Cobra
The Second Issue Cobra, like this nickel-plated model with factory-carved mother-of-pearl grips, was one of the best examples of Colt’s famed original snake guns. 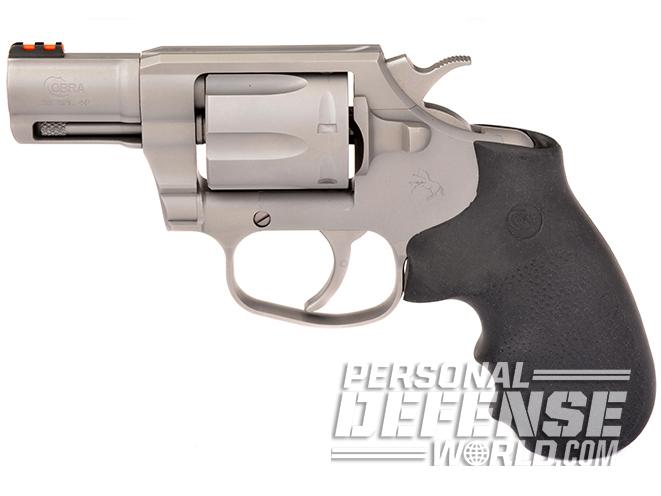 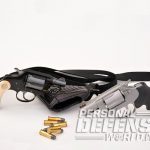 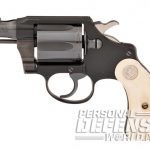 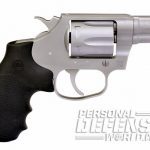 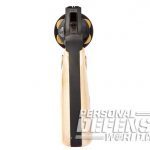 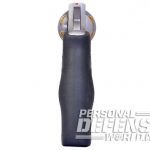 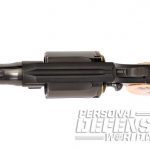 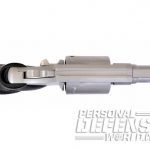 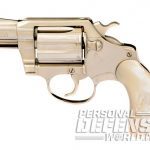 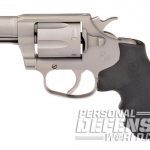 Back in the 1950s, the majority of carry guns were double- action revolvers, as were most law enforcement duty guns, and usually they were either Smith & Wesson or Colt models. The majority of plainclothes officers usually packed an S&W Chief’s Special or Bodyguard, a Colt Detective Special, or the Colt Cobra. It was the era of the wheelgun.

In 1973, both the Detective Special (Third Issue) and Cobra (Second Issue), introduced a shrouded ejector rod, and this remained part of the design until they were discontinued. The Cobra was dropped from the Colt catalog in 1981; the Detective Special remained in production another five years. It was briefly resurrected from 1993 to 1995, but by the end of the 20th century, Colt’s double-action wheelguns were nearly extinct.

While technically a lightweight Detective Special, the Cobra evolved a life of its own, being what was to become the first of the now vaunted “seven serpents”—the Cobra, Diamondback, Python, Anaconda, Viper, Boa and King Cobra. Interestingly, S&W’s modern snub-nose revolvers did not come about until the 1950s, concurrent with the introduction of the Cobra, and its snubbie J-Frame models were limited to only five .38 Special rounds. The much older Colts not only held a one-round advantage but were enriched with fictional and factual histories that had made them iconic by the 1950s.

S&W would build its own legacy with the Chief’s Special and Bodyguard; however, “legacy” is a more appropriate choice of words for the Cobra. It would become part of an entire genre of Colt revolvers with their own following, and even a book, Seven Serpents, about the history and development of the Cobra, Python, Diamondback and the rest of Colt’s snake guns. The Cobra, however, was the very first in the series.

Like the venomous reptile it was named after, this sixgun was light and agile—almost 6 ounces lighter than the Detective Special. The Cobra was manufactured using an alloy frame that Colt dubbed “Coltalloy.” The guns were offered in four different calibers—.38 Special, .38 New Police, .32 New Police and .22 Long Rifle—and with either the standard 2-inch barrel or longer lengths of 3 or 4 inches as well as a rare 5-inch version chambered only in .38 Special.

Cobras were offered with either an anodized blue alloy frame (and a slightly contrasting blued barrel and cylinder), or with an all-nickel finish. The guns were also available from the factory with a hammer shroud for more effective coat pocket carry. Not everyone used a holster. In 1973, the updated Cobra models would have a new combat grip design and fully shrouded ejector. These were distinguished as the “Second Issue” and only available in .38 Special.

Fast forward to the 21st century. Colt’s snake guns are long gone, having become collectible and quite expensive. At the same time, S&W has continued to advance the technology and produce a full line of compact revolvers in a variety of calibers. S&W is not alone in this market today, a fact that was not lost on Colt as the company began to resurrect itself once again in the new century. And only now has Colt begun to delve into its own history of double-action revolvers, which dates back to 1877, an appropriate 140-year span from which Colt double-action revolvers have only been totally absent since the Anaconda and Python Elite were discontinued back in 2006.

During that decade-long double-action hiatus, Colt went through yet another restructuring of its manufacturing and production lines. When you consider that Samuel Colt invented the first practical revolver in 1835 (his first patent), and that the “Colt’s Patent Firearms Manufacturing Co.” produced the first cartridge-firing American double-action revolver in 1877, as well as the first snub-nose revolvers, the company’s absence from the market in this century was more than conspicuous.

While the Python might have seemed the likely model to resurrect, the majority of modern double-action wheelguns are .38 Special snubbies, and the buyers of those guns prefer them for the same reasons as generations past: ease of carry and effective firepower. In short, the very definition of the Detective Special and Cobra.

With the popularity and value of Colt’s famous snake guns rising, the logical gun to re-launch Colt’s double-action revolver legacy had to be the Cobra, a revolver that can step out of the past and into the present without skipping a beat.

This is a snake gun that has shed almost all of its old skin and emerged as a Cobra in name only, save for a few traditional design features, notably the cylinder latch, shrouded ejector (based on the Second Issue Cobra) and a similar contour to the triggerguard. The general lines of the frame and hammer also bear a resemblance, but the new Cobra is a larger handgun—7.2 inches in overall length compared to the original snake gun’s 6.75 inches—and with its stainless steel construction, a hand-filling 25 ounces next to the First Issue’s weight of just 15 ounces.

But there are some significant advantages to the new Cobra’s build, including a slightly longer sight radius of 3.44 inches versus 3.38 inches, a red fiber-
optic front sight, and a 2.06-inch barrel that is a fraction of an inch longer barrel (the barrel is recessed 0.063 inches from the muzzle) compared to the original gun’s 2-inch tube. And back then, the barrel was the barrel; it wasn’t mounted inside a machined external shroud. The original Cobra also had a barrel that became gradually wider as it went from the muzzle to the front of the frame, thereby making it easier to reholster. The new gun uses a similar design, though not so elegantly executed, as it looks more like a swell than a taper. Keep in mind that the original Cobras were handcrafted, hand-fitted revolvers; the new guns are the product of today’s manufacturing technology. Not a bad thing, just a different thing.

And then there are the grips. As much as I like the attractive optional factory ivory stocks on the original Cobra (as well as original Colt full-checkered walnut grips) the Cobra could have a bite when you pulled its nicely grooved trigger. The new Cobra picks up on the Second Issue model, which had oversized (hardwood) grips, only now you get a recoil-absorbing Hogue OverMolded rubber, a one-piece grip that fills the average-sized hand
and provides a better grasp.

There is one other detail well worth mentioning: safety. The original Cobras had their firing pins on the hammer. The new model uses a transfer bar and a frame-mounted firing pin. Not as slick-looking as an old Colt, but a great deal safer to carry with all six chambers filled.

The one feature that the new Cobra has hands-down over the originals is the trigger pull. Although both guns use a two-leaf mainspring, time and technology has weighed in favor of the latest model with a double-action trigger pull of just 8.69 pounds (on the test gun). This is a very smooth trigger press with mild stacking as the cylinder rotates clockwise. The trigger is slightly wider than the original Cobra’s, and the shoe is smooth, unlike the vertically serrated shoe on the 20th century model.

Firing in double action, there is a point as you pull through where the trigger can be staged, indicated by a tactile feel in the grip accompanied by an audible click as the cylinder locks into battery. This is easy to miss, but on the 1950s-era Cobras, the trigger pull had a clear and definite staging point when the cylinder rotated into battery.

The remainder of the pull on both guns is heavy but consistent from shot to shot with a very smooth break. Cocking the hammer on the new Cobra, however, results in a much lighter single-action trigger pull of 3.56 pounds. The double-action trigger’s total travel length is approximately 0.75 inches.

Going back in time, the 1950s Cobra had a narrower trigger with an average double-action pull of 10.13 pounds, a single-action release of 4.36 pounds and 0.8 inches of travel when fired in double-action mode. The advantage clearly goes to the new gun.

How much did you have to pull out of your 1950s billfold to purchase a Colt Cobra? About $71.50. That’ll cover the sales tax and paperwork fees in most states for the $699 MSRP of the new Colt Cobra. But keep in mind that today you’ll pay upwards of $1,250 for a 98-percent condition First Issue Cobra, and $850 for a Second Issue model.

Some gun writers like to test every handgun from a benchrest or, when possible, a Ransom rest at a range of 25 yards. Rarely will anyone carrying a snub-nose revolver find themselves in a situation where they will be shooting from a benchrest and at a prearranged distance. I have always preferred testing guns in a real-world environment, standing and firing off-hand at a reasonable distance from the target based on the gun, caliber, barrel length and practical defensive distance for that pistol.

With the Cobra’s 2-inch barrel, that distance is 21 feet to 45 feet (7 to 15 yards). A snubbie revolver is not a target pistol—it is a combat handgun. How well it shoots from a benchrest at 25 yards is a solid indication of its inherent accuracy, but for the average person (and law enforcement officer), a snub-nose revolver is a close quarters battle pistol.

For this test, I fired an old Cobra and the new one off-hand at 7 yards using a Weaver stance and a two-handed hold.

I selected three .38 Special loads—no +P rounds, since they are not for use in the old Cobra. To keep a level playing field, my first choice was a traditional Winchester 158-grain lead round-nose (LRN) load, followed by Sig Sauer’s 125-grain Elite Performance FMJs and Aguila Ammunition’s 130-grain FMJs.

Going downrange, the old Cobra’s average six-shot group measured 1.75 inches with a best five-shot group measuring just 1.5 inches. The new Cobra showed a solid advantage with a little more weight, a larger grip, smoother trigger pulls in both single- and double-action modes, and far better sights. With the new snake gun, the average six-shot group size measured 1.5 inches, and its best five-shot group measured 0.75 inches with three rounds out of the five overlapping on the target. The old gun is certainly better looking in a classic Colt revolver sense, and easier to conceal, but it can’t beat the new Colt for handling and accuracy.

This new .38 Special +P Colt revolver is definitely not your father’s (or your grandfather’s) Cobra, and it may look more like other modern snub-nose revolvers currently available on the market than an American classic, but it is still a Colt through and through—something that no other modern double-action snubbie revolver can claim to be. 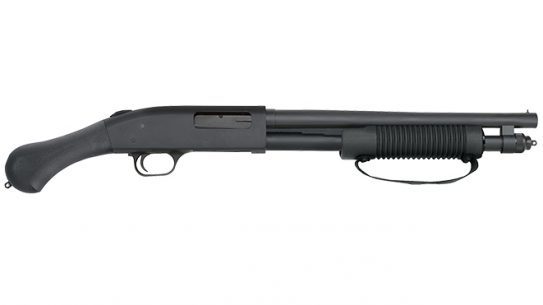 Now Available: A 20-Gauge Version of the Mossberg Shockwave