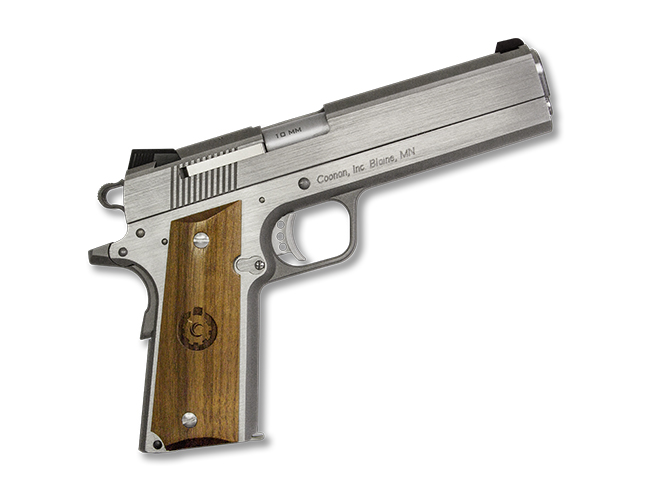 1 of 4
Coonan MOT 10: The ‘Lightest Shooting’ 10mm Pistol You’ll Find
Coonan employs extended controls on the MOT 10, as with the rest of the Coonan pistols. 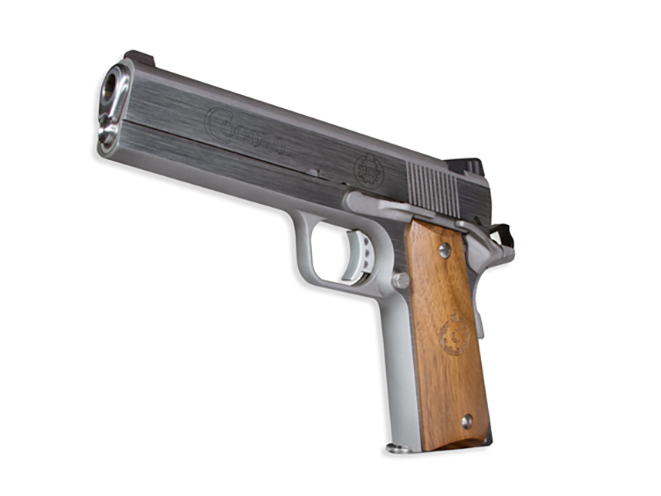 2 of 4
Coonan MOT 10: The ‘Lightest Shooting’ 10mm Pistol You’ll Find
On the range at typical competition distances, the MOT 10 is a flat shooter. 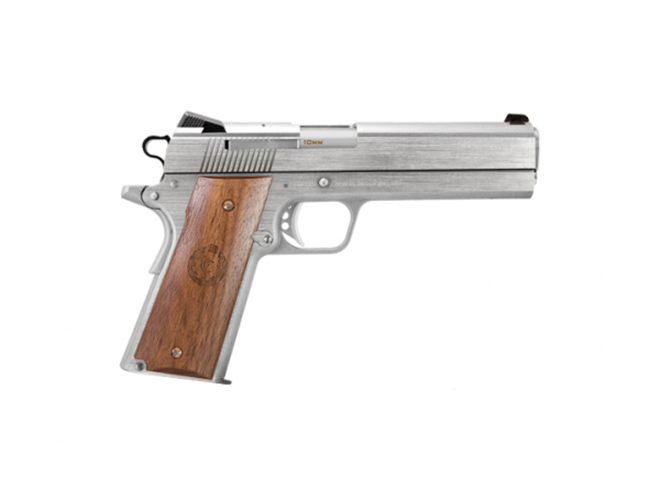 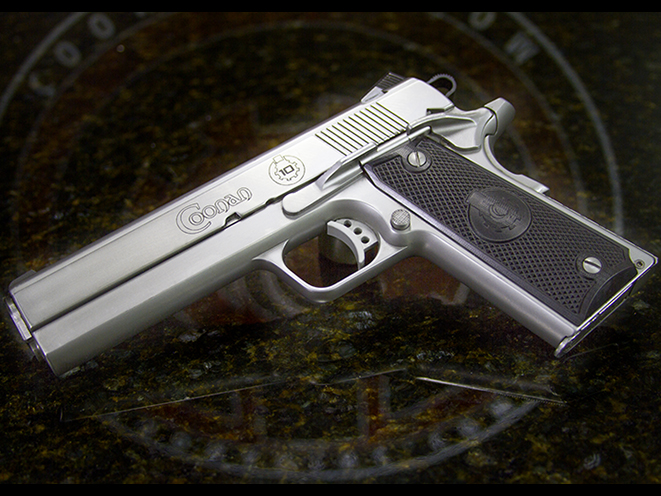 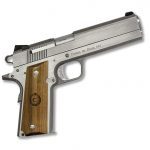 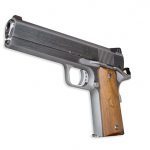 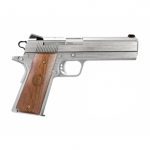 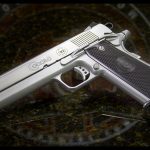 If a well-built pistol is a work of art, then a well-built pistol in 10mm could be considered a masterpiece. That’s just the kind work a small group of metal boom-boom artists in Minnesota are churning out these days at a company called Coonan, Inc. The aforementioned “masterpiece,” in this case, is the Coonan MOT 10.

There in Blaine, Minn., handgun lovers make stainless steel sculptures out of some of the world’s most powerful handgun calibers. Coonan’s latest masterpiece is the MOT 10. The package consists of a five-inch barreled 1911-based pistol that takes all the piss and vinegar the 10mm cartridge is known for and filters it through Coonan’s engineering genius so that shooters who fire the feisty .40 caliber swear they smell lemonade.

During the recent Athlon Outdoors Rendezvous at the Gateway Canyons Resort in Colorado, I had the privilege to see and shoot the Coonan MOT 10. I also spoke in-depth with Coonan Inc.’s Mark Dante about the new handgun.

So why did Coonan—a company already known for taming the even nastier .357 Magnum—finally join the 10mm crowd?

“When the re-emerging 10mm trend got to the point that it was clear that it was here to stay, we couldn’t ignore the customer requests to build a Coonan for this caliber any longer,” Dante says. “It was easily the most requested caliber for a future Coonan and the excitement behind the round is contagious. As soon as we got the first two working prototypes into our test-fire range—or what we refer to as ‘the box of death’—we knew we had a winner.”

If the idea of building a 10mm 1911 that shoots as softly as a fluffy bunny on one end while delivering every bit the fire and copper-coated brimstone we’ve learned to expect from the 10mm on the other doesn’t evoke passion in your soul, then you, sir, have no handgun-loving heart.

To start, Coonan drew from decades of experience it gained from building the .357 Magnum pistols.

“We started as a big bore pistol manufacturer, so we got past the hurdles a long time ago that we see other manufacturers dealing with now,” Dante says. “It is much easier to bring the size of something down a bit, rather than trying to modify a system to handle more pressure and energy. We realized back in the early 80s that the traditional toggle linked barrel in 1911s was a weak area in the system.”

“The .357 Magnum rounds were hammering this area, especially ‘back in the day’ when common, off-the-shelf .357 Magnum rounds were much hotter than the typical .357 Magnum cartridge you find on the shelf these days. That is when we came out with the Model B Coonan, trading the troublesome link for our current lugged barrel design,” Dante continued. “While the 10mm is thought of as a ‘hot’ round, it was an easy transition for us. You will not find any boxes of 10mm rounds out there with a ‘Don’t Use This Cartridge in Coonan Pistols’ sticker on the box.”

The Coonan MOT 10 shares the same system characteristics as every other Coonan pistol.

Coonan uses a link-less barrel, which gives its pistols a markedly reduced felt recoil along with more energy directed at the projectile.

“We also eliminate the issues surrounding the link in a traditional 1911,” Dante says. “We consider that a weak link in the 1911 platform, as did John Moses Browning. When the 1911 man decides to forgo a linked barrel in his last combat handgun design, it is something to heed. Our MOT 10 is the ‘lightest shooting’ 10mm handgun available.”

There was a lot more involved in designing a Coonan 10mm pistol than barrel work. For example, Coonan utilizes a pivoting trigger on Coonan pistols, once again following the footsteps of Browning.

“The pivoting trigger on the pistol always incites the same reaction the first time someone dry fires a Coonan: A smile and a nod,” Dante says.

The trigger is a two-part system — a trigger and separate trigger bar. This allows Coonan to build in a slight arc to the travel of the trigger, while still pushing the trigger bar in a linear movement. This creates what Dante calls a “superior trigger feel” when compared to a traditional single-piece trigger/trigger bar.

“We will get folks that look up after dry firing the gun and ask, ‘trigger job?’ and I always reply, ‘that’s not a trigger job, that’s a Coonan,'” he says.

Coonan’s external extractor makes for a gun that is easy to set up and maintain. The beefy extractor is robust and shrugs off high-pressure rounds without notice.

Coonan also employs extended controls on the MOT 10, as with the rest of the Coonan pistols. The result? Shooters with small or large hands are able to operate the system while keeping the firearm on target.

“The extended control group has been requested so often that we have begun to offer them as an aftermarket control group for 1911 owners,” Dante says.

So what and who exactly is a soft-shooting 10mm 1911 build for? According to Dante, just about anyone.

“The MOT-10 is a multi-function pistol,” Dante says. “We like to maintain a ‘Sport, Defense, Survival’ blanket over all our firearms and the MOT 10 does it well.”

As a hunting pistol, the Coonan MOT 10 is able to toss a large or small pill downrange at very high velocities with devastating effects.

On the range at typical competition distances, the MOT 10 is a flat shooter. It’s guaranteed to knock down the silhouette with very fast reloads facilitated by the extended controls.

Then there’s the Coonan MOT 10 as a self-defense platform. For those purposes, it delivers a very clear message downrange with outstanding follow-up shots due to its low felt recoil and light muzzle rise.

Coonan has been making big bore pistols for quite a long time in Blaine, Minn. That is by design, as any artist wants complete control over their work. All its pistols are not just entirely American made, but nearly entirely Minnesotan made with 98 percent of the firearms manufacturing process coming from the Land of 10,000 Lakes.

“We have packed a lot of CNCs, mills, EDMs and Swiss screw machines into a small area. The few elements we do not manufacture at our facility will soon be made under our roof,” Dante says. “We feel that the fewer the elements made from out of house the better control we have, and thus, the better quality we can give our customer. We are a company of firearm enthusiasts here, and it gives us great pride to pull a pile of raw material in one door and push Coonan pistols out the other.”

For more information on the Coonan MOT 10, please visit CoonanInc.com. 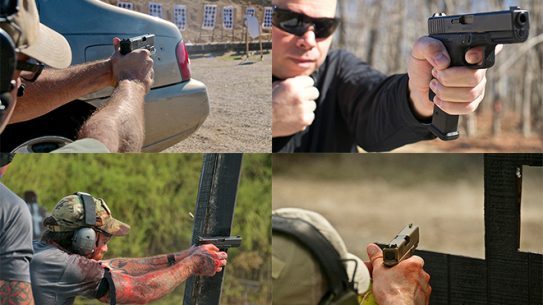 These five critical Glock 19 EDC pistol upgrades will only serve to bolster your...