A Detroit concealed carry permit holder shot an armed robber multiple times in self defense over the weekend.

The unidentified concealed carrier was walking with his cousin near a market on the city’s east side. They were suddenly approached by a man later ID’d as 29-year-old Sanchez Quinn.

Surveillance footage of the incident shows Quinn drawing his firearm. Unfortunately for him, one of his intended victims was ready to fight back with a gun of his own.

“I turned and looked and saw the other gentleman had a gun pointed at my face,” the Detroit concealed carry permit holder told FOX 2 Detroit over the phone. “I was able to knock his hand down and the gunfire rang out.”

Quinn and an accomplice were arrested and will undoubtedly face charges.

The concealed carrier—who can be seen in the video wearing a black and white T-shirt and shorts—said he immediately though to grab his CCW when Quinn brandished his firearm. Police said it’s a good thing he did, or the incident could have ended very differently for he and his cousin.

“It makes me mad because you have people out here that work every day. They are innocent; you want to take from them,” the Detroit concealed carry permit holder said. “These guys, I definitely feel don’t need to be back out on the street because someone else might get hurt and it might happen in a different way.” 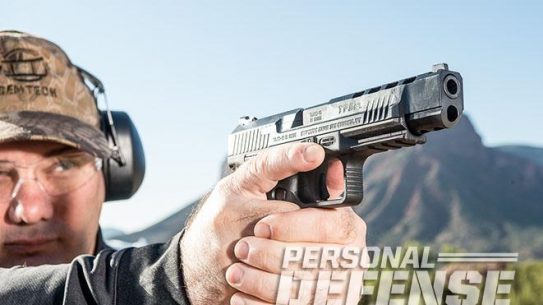 The TP9SFL is Turkish manufacturer Canik’s latest polymer pistol and US shooters will be...