An armed burglary suspect was shot and killed after breaking into the home of an off-duty Baltimore police officer last week.

WBAL says the officer was asleep at his house in northeast Baltimore at around 11:30 a.m. on Monday morning when the suspect—later identified as 20-year-old Darius Miller Jr.—broke in, accosted him with a gun and started demanding money.

“The police officer was a victim of a burglary. He wasn’t working, didn’t have his body-worn camera on. He wasn’t responding to a call for service,” Baltimore police Capt. Jarron Jackson said.

A struggle ensued, during which the officer managed to wrestle Miller’s weapon away from him and shoot him with it. Afterwards, the officer called 911, and Miller was transported to an area hospital where he died of his injuries. The off-duty officer was uninjured. The handgun used by Miller was recovered by police at the scene.

The officer—who won’t be identified because he was off-duty when the incident occurred—has been placed on routine administrative duty pending the results of the investigation into the shooting.

Miller, meanwhile, has a huge rap sheet that includes convictions for armed robbery, conspiracy to commit armed robbery, and car theft. He was actually due in court two days after his death for violating probation related to past offenses. In 2015, Baltimore state Parole and Probation officials named him as “the state’s most dangerous supervisees,” according to the Baltimore Sun.

Police don’t believe Miller and the officer had any interactions before the break-in.

“We think the suspect decided to break into his house, not knowing it was an officer, not knowing this would be the end result,” Jackson said. 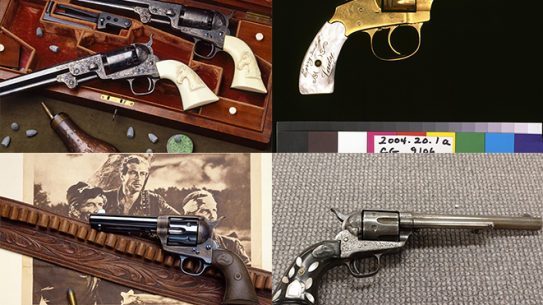 Journey back in time with us as we look at eight legendary old west...