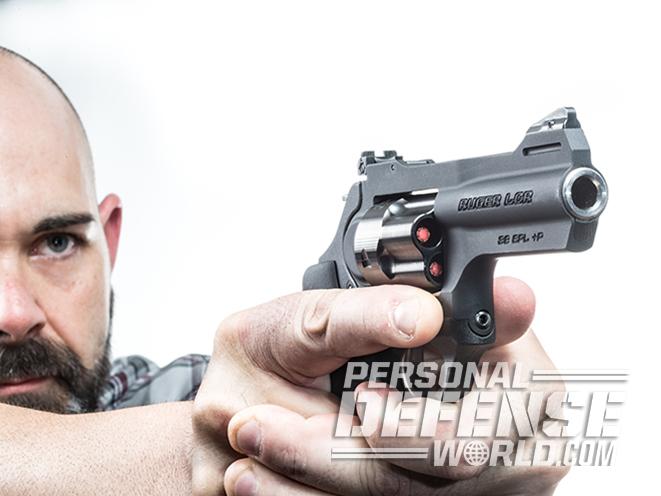 1 of 11
Photo by Alex Landeen
Ruger LCRx
“…I went back to the Ruger LCRx. It was just one of those guns that I fell in love with immediately…” 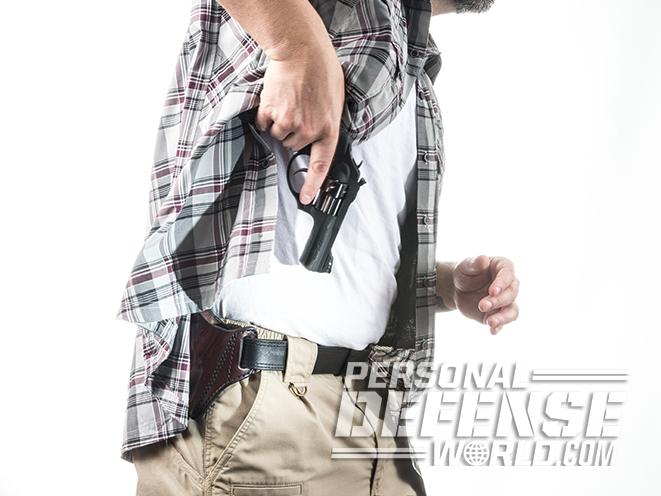 2 of 11
Photo by Alex Landeen
Ruger LCRx
Despite its longer 3-inch barrel, this particular Ruger LCRx would still make a potent choice for concealed carry. 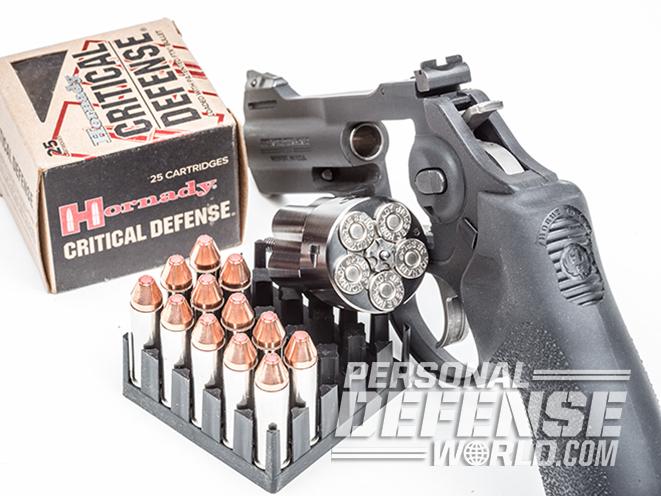 3 of 11
Photo by Alex Landeen
Ruger LCRx
The .38 Special LCRx was built from the ground up with a PVD-coated stainless steel cylinder to handle +P ammunition. 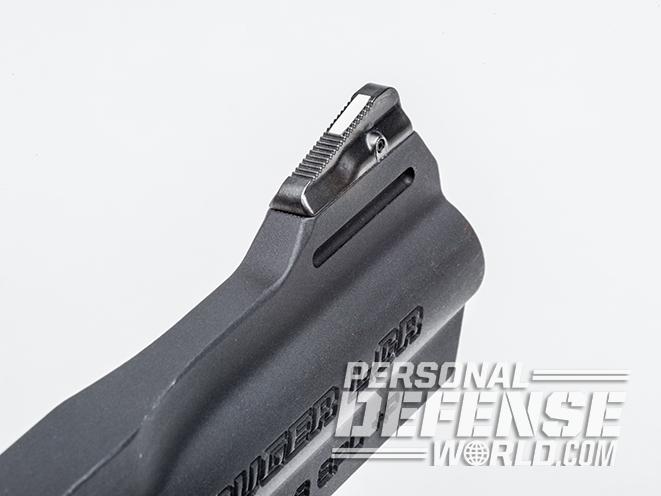 4 of 11
Photo by Alex Landeen
Ruger LCRx
The pinned front ramp sight has a white insert for fast targeting, and it’s easy to replace with aftermarket units if so desired. 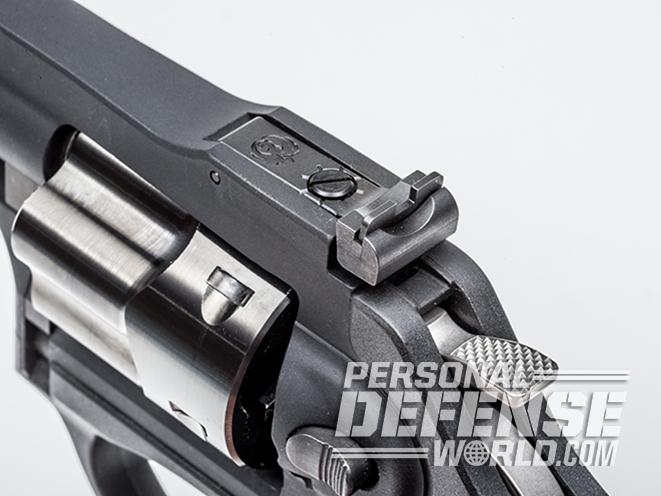 5 of 11
Photo by Alex Landeen
Ruger LCRx
Note the rear sight, which can be adjusted for both windage and elevation. 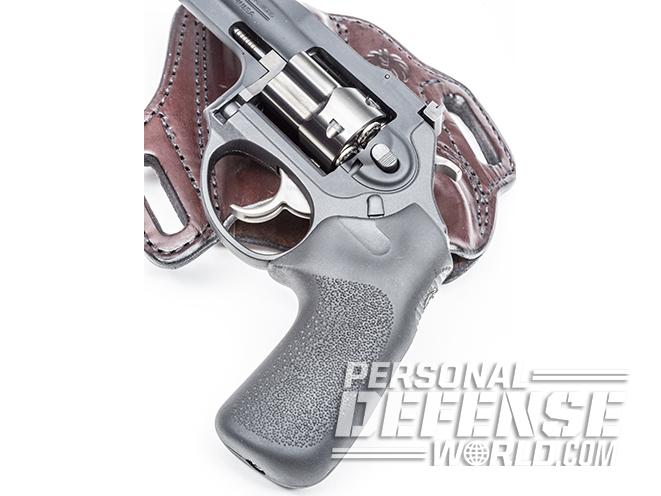 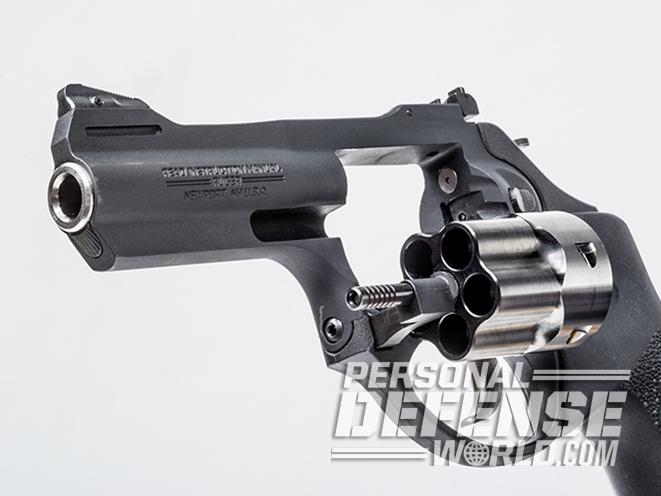 7 of 11
Photo by Alex Landeen
Ruger LCRx
The Ruger’s monolithic frame is made from aerospace-grade 7000 series aluminum to help save weight without sacrificing strength. 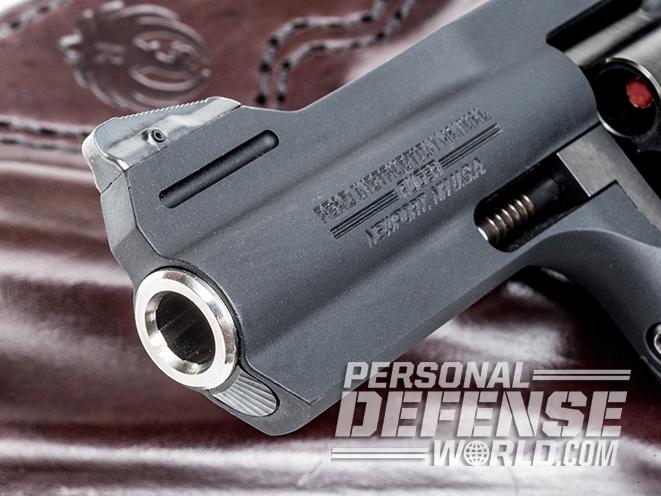 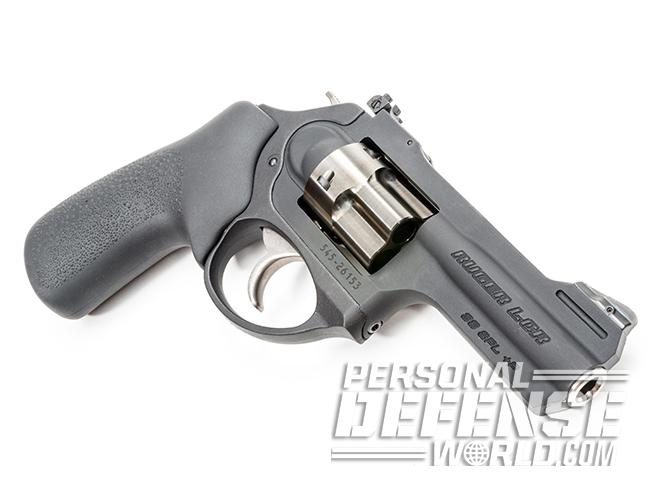 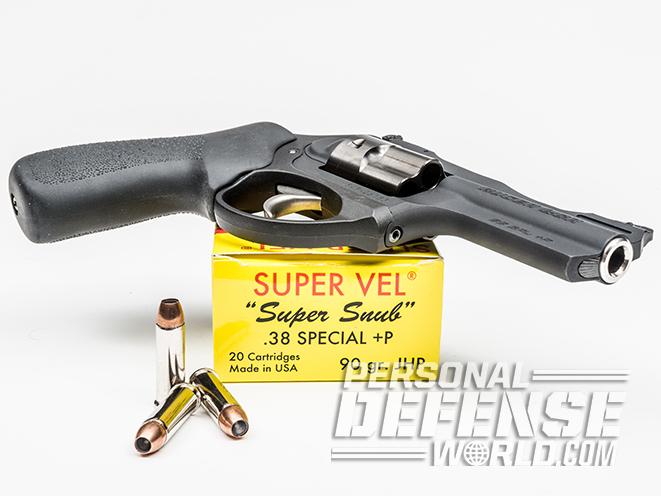 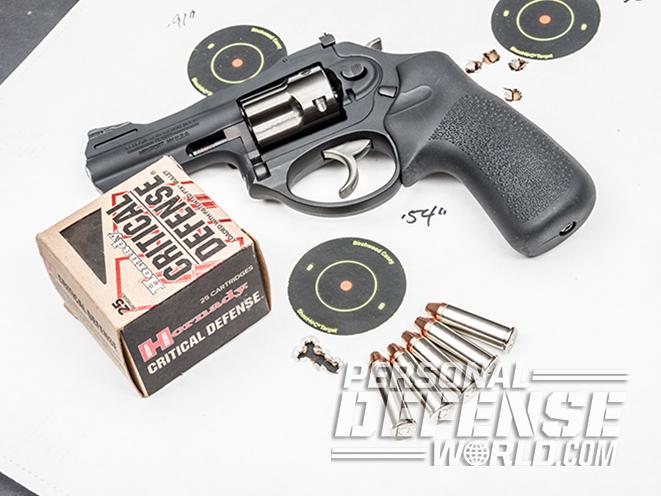 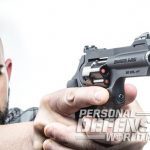 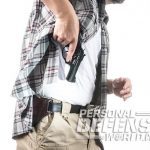 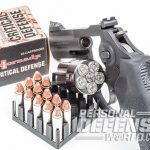 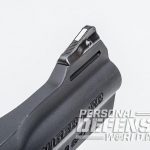 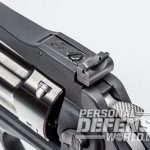 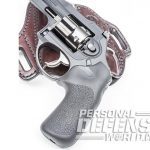 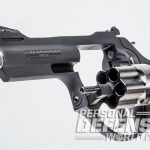 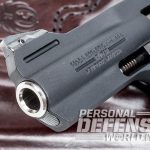 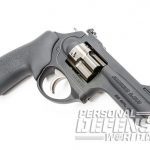 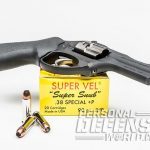 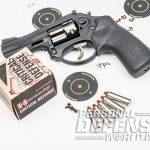 Last December I was invited to an outing at Gunsite Academy in Paulden, Ariz. I was one of a number of gun writers invited by the event organizer, Dick Williams. Our mission was to grab some range time and instruction with the wheelguns. We were told to bring whatever revolvers we wanted and a supply of ammunition and a carbine in a matching caliber, if we liked. I have a relatively small revolver collection in comparison to my 1911 arsenal, but I managed to pack a S&W Model 19 with a 2.5-inch barrel and a customized Model 19 with a 4-inch barrel, some Galco leather and a few hundred rounds of ammo into my car before making the four-hour drive from Tucson to Paulden, Ariz.

Between classroom instruction and supervised range sessions with Gunsite’s accomplished instructor, Il Ling New, we had a chance to see brand-new products from Ruger as well as the Korth revolvers now being imported by Nighthawk Custom.

Ruger had three new revolvers to display, the GP100 in .44 Special, the new eight-shot Redhawk in .357 Magnum and the LCRx, a .38 Special with a 3-inch barrel and an external hammer. Mike McNett from DoubleTap Ammunition supplied the rounds for our group to test-fire these new guns. We all stood in line to shoot the Korths. I believe it was the first time any of us had fired these wonderfully machined and finished revolvers from Germany, and they shot exactly the way you’d expect guns costing several thousands of dollars to shoot. The double-action (DA) trigger pull felt like it was less than 5 pounds, and the balance and accuracy were phenomenal—it’s a gun that is so easy to shoot you’d swear it shoots itself.

Everyone enjoyed shooting the new Ruger GP100 in .44 Special, too. The caliber is well celebrated, and the GP100 makes the perfect platform for it The new eight-shot Redhawk was fun to shoot, too, though everyone seemed to mention its uncomfortable grips.

While others stood in line to fire another cylinder full of bullets through the Korths revolvers, I went back to the Ruger LCRx. It was just one of those guns that I fell in love with immediately and, unlike the Korths, was in my price range.

Weighing less than a pound and sporting a 3-inch barrel, the little Ruger is what writers of yesteryear would describe as a “kit gun”—an all-around outdoorsman’s gun used to fend off wildlife, bag small game and defend against attackers. A perfect companion for hikers, campers and fishermen, the LCRx is also rated for use with +P ammo, making the little five-shot revolver a formidable defense option.

But what sold me on the Ruger LCRx was just how comfortable it was to shoot. Part of this equation was the DoubleTap wadcutter ammo that I shot through it that day at Gunsite. Using a 148-grain lead projectile seated flush with the case mouth and averaging just 836 fps, the wadcutters tore ragged one-hole groups on the paper targets set up at 15 yards. I’d forgotten how much fun it is to shoot a centerfire handgun with rounds designed for accuracy and not stopping power. The clean holes the wadcutters cut in the paper target made my hits easily visible. Besides the accuracy and ease of shooting, what really got my attention is the LCRx’s less-than-1-pound weight. It’s 15.7 ounces to be exact. How Ruger achieved this is a feat in itself!

The monolithic frame is made from aerospace-grade 7000 series aluminum. Note that the frame encompasses the area around the cylinder opening and also the barrel. A hardened and rifled steel barrel insert is affixed to the inside of the shroud.

Ruger machines the LCRx’s cylinder from stainless steel and carves all non-essential mass away, leaving a strong but lightweight five-shot cylinder. Ruger uses a PVD coating to blacken the cylinder, giving it a lubricious finish and making it impervious to corrosion.

The polymer fire control housing contains the hammer, trigger and mainspring and is attached to the aluminum frame. With two of the major components made from lightweight materials, Ruger engineers have ingeniously crafted a revolver chambered for a serious caliber and have managed to keep its weight under a pound.

For controllability, Ruger outfits the LCRx with a Hogue Tamer Monogrip, and it is an excellent choice to help tame the recoil of this lightweight revolver. It features a nearly straight backstrap and provides material between the frame and triggerguard to prevent the middle finger knuckle from taking a beating. Its slim dimensions are comfortable even in my large hands, and the tacky rubber material ensures a secure and comfortable firing grip. If you don’t care for these grips, there are a number of alternative grips that will fit the LCRx’s polymer grip peg. Not only do the thin grips help with concealability, but the LCRx is devoid of any excess material that would affect its ability to be carried unnoticed. The fat has been seriously trimmed.

Like most DA revolvers, the LCRx’s trigger pull is lengthy and heavy, needing about 12 pounds of pressure to break the shot. Ruger uses a smooth-faced trigger, about 0.3 inches wide, with rounded edges that fit the first joint of the trigger finger nicely.

The LCRx has an external hammer—that’s actually what the “x” refers to—and it can be cocked for precise single-action (SA) shots. It has a checkered hammer spur, and my test sample’s SA trigger pull broke at 6 pounds. The Ruger revolver uses a frame-mounted firing pin rather than a hammer-mounted pin, and there is a transfer bar to prevent the gun from firing unless the trigger is purposefully pulled.

One of the things about the LCRx that endeared me immediately is its front sight. It is removable and replaceable by pushing out a pin, but what I really like about it is its white insert, which helps me find it quickly when coming up on target. Also, while we’re at it, the rear sight is adjustable for both windage and elevation.

With a good supply of ammo from a variety of manufacturers, I took the LCRx out to my desert range and fired some groups. Shooting from my DOA Tactical bench, I used a Millett BenchMaster for support and fired five rounds for each group. I used 2-inch Shoot-N-C targets and set my target stand out at 15 yards. All of the groups were fired in SA mode.

Black Hills’ 148-grain hollow-base wadcutters (HBWC) were an absolute delight to shoot. Averaging just 663 fps from the LCRx’s 3-inch barrel, the target rounds produced hardly any muzzle lift. It made concentrating on the sights extremely easy while I applied the pressure to break the shot. DoubleTap’s 148-grain wadcutters possessed a little more oomph and averaged over 170 more fps but were still nearly recoil-less.

All of the rounds shot exceptionally well, but both of the Hornady loads distinguished themselves in terms of accuracy. The 110-grain +P Critical Defense rounds produced a five-shot group measuring just slightly more than half an inch. The Hornady 125-grain American Gunner XTP rounds printed a group just slightly larger.

If you’re my age or older, you’ll certainly remember the Super Vel company founded by legendary handgunner Lee Jurras. In the mid-1960s, most police officers carried .38 Specials loaded with lead 158-grain bullets that limped along at about 800 fps. Not surprisingly, those loads were pathetic fight stoppers. Jurras developed a 110-grain jacketed hollow point (JHP) that whistled along at 1,400 fps. First adopted by the Los Angeles County Sheriff’s Office, many other police agencies followed suit. But by the mid-1970s the larger ammunition companies who sold Super Vel components froze Jurras out of business. That was the end of Super Vel, or so we thought. Firearms industry insider and former editor of one the major gun magazines Cameron Hopkins obtained the rights to the name Super Vel and is now commercially loading ammo with the same goal of pushing lightweight JHP bullets at hyper velocities.

I had a sample box of the new Super Vel “Super Snub” 90-grain JHP rounds, which are loaded with powder designed to burn most efficiently in short barrels. Velocities averaged over 1,400 fps out of the Ruger LCRx and generated a whopping 400-foot-pounds of energy. It also proved to be accurate, placing five shots into a group under 1 inch at 15 yards. I won’t lie; these rounds were a handful to shoot out of the little revolver but not unmanageable by any means.

Using Hornady’s 125-grain American Gunner XTP rounds, I fired several cylinders at my MGM BC-C Zone steel target set up at 15 yards. It approximates a USPSA target with the D-zone removed. I used a Mitch Rosen strong-side leather holster, purchased from Ruger’s website, to carry the LCRx. The finely boned holster held the Ruger securely until presented, and my drawstrokes were smooth and unhindered. As I mentioned earlier, the DA trigger is a little heavy at around 12 pounds, but I was able to draw and fire the Ruger and make hits without any problems. I was able to pick out the front sight very quickly because of its white ramp and keep it on target throughout the full trigger press.

The Ruger LCRx is a versatile handgun. While it will find favor with outdoorsmen who like carrying a lot of gun in a little package, I believe it will also find a following with concealed carry folks who appreciate the slightly longer sight radius the 3-inch barrel offers over snub-nose barrels.

Judicious selection of ammunition makes this revolver prefect for introducing new shooters to centerfire handguns. For me, it makes the ideal companion for afternoon dog walks in the desert with the first two chambers loaded with snake-shot.

This article was originally published in “Gun Annual” 2018 #199. To order a copy, visit outdoorgroupstore.com. 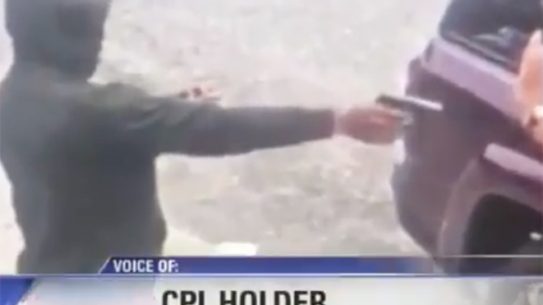 A would-be armed robber earned a trip to the hospital thanks to the brave...