by Richard Johnson
in Guns
0

"The Performance Center Model 986 is a fine example of the kind of modern revolver Smith & Wesson is capable of making. It looks good, feels good and shoots well."

I’ve always been fascinated by 9mm revolvers. I’ve never pinpointed the precise reason, but the idea of shooting rimless cartridges in a wheelgun appeals to me. I suppose it could be my inner tinkerer. From odd computer builds to unusual gun projects, I’m attracted to things others say are too difficult to accomplish.

In the 1990s, I really wanted to buy a Smith & Wesson Model 940. It was a Centennial revolver chambered for 9mm cartridges. However, at that time, I was a young cop trying to support a small family. Wants weren’t in the budget. Although you can find Model 940 revolvers on the used market, new ones are out of the question. Smith & Wesson ceased producing them some time ago.

So when I saw the Smith & Wesson Performance Center had introduced a new 2.5-inch-barrel Model 986 in the famous Luger cartridge, I was immediately interested. Sure, the gun is quite a bit larger than the old Model 940, but it offers many desirable features and is still a good size for concealed carry. Coming from the Performance Center, I suspected the gun would be a sweet shooter.

Producing beautiful guns that run exceptionally well is the hallmark of the Smith & Wesson Performance Center. From classy collectibles to serious combat weapons, the guns from this crew of artisans always deliver. The new Model 986 is a great example.

The Model 986 is an L-Frame gun, which is much beefier than the J-Frame I longed for 20 years ago. However, the larger frame gives the gun several benefits a smaller gun doesn’t have. First, the Model 986 is large enough to handle a seven-round cylinder. This gives it a greater capacity than some of the 9mm pistols being designed for concealed carry today.

The Performance Center went with an unfluted cylinder made of titanium. This gives it good strength without adding much weight to the package. The cylinder is gray, which contrasts nicely with the matte stainless finish of the frame and barrel. The colors give the gun an understated multi-tone look. Because the gun is designed for a rimless cartridge, it ships with moon clips to hold the ammunition.

More mass in the frame also helps the gun deal with “bullet jump” issues. Bullet jump, or migration, is a legitimate concern in some lightweight revolvers. This is a phenomenon in which the bullets of unfired rounds move. Bullets that move can increase the overall length of the assembled cartridge.

At best, an increased overall length in the unfired cartridges will negatively affect the performance of the bullet when shot. At worst, the overall length of the cartridge will increase to the point where the cylinder will bind and not rotate. This will take the revolver out of action until you remove the offending round and reload the gun. In the middle of a fight, that could have devastating consequences.

For most rimmed handgun cartridges, bullet jump isn’t a problem. Because these kinds of rounds are expected to be shot from a revolver, they normally have a roll crimp on the case mouth to help lock the bullet in place. A 9mm cartridge does not typically use a roll crimp. Most often, you will see bullet jump when combining a light revolver with a heavy-recoiling round. However, because the 9mm cartridge does not use a roll crimp, these rounds can migrate more easily.

A larger-mass revolver will help reduce bullet migration. The Model 986 is not a giant, but it’s not a featherweight, either. Unloaded, the gun weighs almost 32 ounces. In my experience, that should negate any meaningful bullet jump. Nonetheless, it’s something I would check at the range.

The Model 986 has a custom 2.5-inch barrel that’s much more than a typical production piece. First, it has a recessed precision crown. As many shooters know, the crown can have a significant effect on the accuracy of a gun. Recessing the barrel crown helps prevent accuracy-reducing damage to it.

When judging a revolver, many shooters start with the trigger. A poor trigger makes the gun a non-starter to many aficionados. The Performance Center doesn’t let shooters down with this gun. It uses a bossed mainspring that’s said to enhance the smoothness of the pull and help eliminate stacking. Additionally, the gun has a tuned action and an overtravel stop.

The trigger pull is smooth, with a somewhat- heavier-than-expected double-action weight of 11.3 pounds—an average of 10 pulls as measured with my Lyman digital scale. The 5-inch-barreled Model 986 released by the Performance Center a few years ago had a double-action trigger pull closer to 10 pounds on the model I tried. However, the single-action pull is light and crisp, measuring 4 pounds.

S&W uses a front ramp sight with a bright red insert. The rear sight has a black notch that’s fully adjustable. Should you decide to swap out the sights, the front ramp is dovetailed instead of being integral to the barrel.

I found the sights natural and easy to use. The red ramp is easy to find in almost any lighting condition. The rear sight is not much larger than the front sight, meaning there’s a little daylight on either side of the front sight when properly aligned. For target shooting, that generally means an increase in accuracy. However, for self-defense shooting, I like a little wider rear sight for faster front sight acquisitions. That’s a matter of preference, though, and there’s certainly nothing wrong with the sight setup as it’s delivered.

As with any semi-custom revolver, the grips are important for aesthetics and ergonomics. The Performance Center uses a set of custom wood grips on the Model 986. These have smooth polished areas with textured side panels. The fitting between the halves was precise, with a barely perceptible seam along the front edge. The Smith & Wesson logo is engraved in the polished area high on both sides.

Finally, the Model 986 has an internal lock. Almost all modern Smith & Wesson revolvers have it, and I don’t expect it will go away soon. I experienced no problems with it during my testing.

Although we live in the age of modern striker-fired pistols, I’m not ashamed to admit I really like shooting revolvers. One of my favorites is a Model 10 that I bought more than two decades ago. I think it has the smoothest trigger of any gun I own.

To say I was eager to get the Model 986 on the range is an understatement. The gun looked and felt amazing, and I wanted to see if shooting it would live up to my expectations. Happily, it did.

Double-action shooting was smooth. In a full-sized semi-automatic pistol, the 9mm is a relatively tame cartridge. In a revolver, though, the round can feel a bit jumpier. Wheelguns don’t have recoil- operated ejection and loading mechanisms that soak up some of the recoil energy when shooting. Consequently, a 9mm revolver can sometimes surprise a shooter unaccustomed to it.

The Model 986 is no different than other 9mm revolvers insofar as it has a little zip to the recoil. However, it’s manageable and offers much less recoil than some of the other 9mm revolvers I have shot, such as the Taurus 905. Anyone used to shooting +P .38 Special loads will have no problems with it. For someone who doesn’t shoot anything more than .38 Special target loads, the gun might have a touch more kick than expected.

I love the look of the wood grips, but I had a less-than-excellent experience with them when shooting. The stock design was good at the top of the grip, as it allowed for good placement of the finger on the trigger. However, the lower portion of the grip seems larger in girth than the rest of the grip. That made it difficult for me to best use the additional gripping strength of my pinky to control the handgun. Yes, the pinky is probably the least important of the fingers on the shooting hand, but that doesn’t mean it’s not important. If you have large hands, you will probably like the grips a lot.

As I mentioned, bullet jump is a concern with 9mm revolvers. Though this gun is not ultra-light, I was planning on shooting +P ammo and was curious to see if that would introduce the issue. Thankfully, I had no problems with bullet migration in this gun. I took time to measure a few rounds before and after firing a partial cylinder. I did not record any movement. 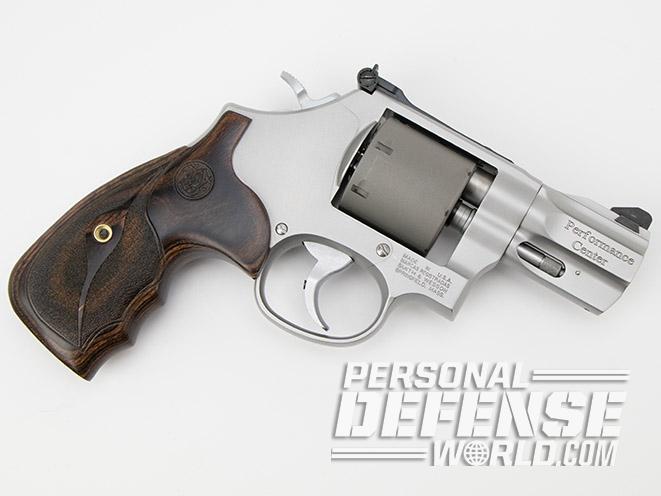 The Performance Center Model 986 is a fine example of the kind of modern revolver Smith & Wesson is capable of making. It looks good, feels good and shoots well. If you have a penchant for Performance Center guns or 9mm revolvers, you will be pleased with this addition to your collection. Although the $1,129 price tag might move it out of reach for average buyers, it’s a real bargain for a wheelgun collector.