An armed robber who tried to hold up a North Carolina convenience store got a nasty surprise when the clerk working behind the counter pulled a gun of his own and started shooting.

The Durham Police Department released three separate surveillance videos that captured the incident from different angles. In the first clip seen above, the suspect—clad in a black mask and holding a gun—is seen in the parking lot casually walking into the Smoke 4 Less store.

In this next video recorded from inside the store, the suspect enters and points his firearm at the clerk, who immediately begins shooting. The would-be armed robber fires back and then immediately flees without taking anything. As the Daily Caller points out, it appears likely the clerk saw him approaching from the parking lot.

The third clip put out by the Durham Police Department shows a different angle of the incident.

According to CBS North Carolina, the store clerk was shot in the arm during the shootout.

Thirty minutes after the events shown in these videos, officers responded to an armed robbery call at a Hardens nearby. The description of the suspect in that case—black male with a skinny build and wearing a black mask, dark clothing and brown Timberland boots—matched the man seen in this video. He’s still at large. 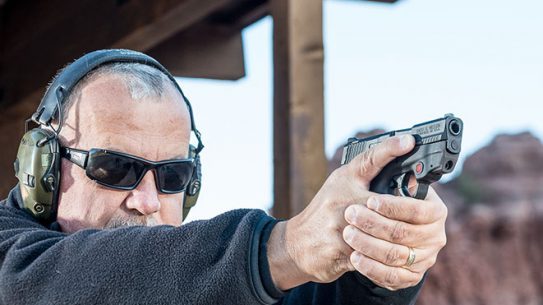