Gun control group Everytown for Gun Safety has released a new video that features various celebrities calling on American citizens to “Reject the NRA” and its push for national concealed carry reciprocity and hearing protection legislation.

The video, which appeared on YouTube on Wednesday and is entitled “Call Congress to #RejecttheNRA,”starts off with actress Emma Stone saying that “The mass shooting in Las Vegas has all of us grieving, scared and angry.” Other celebrities—including Sheryl Crow, Bill Hader, Julianne Moore, Gina Gershon, Laura Dern, Adam Scott and more—soon appear, instructing the viewer to text “REJECT” to Everytown. From there, participants will be connected to Everytown and given contact information for their local lawmakers, along with “guidelines on what to say” to them.

The Everytown video hits out at the NRA’s “radical” and “dangerous” agenda. It particularly takes aim at two critical pieces of legislation for Second Amendment supporters: H.R. 38, also known as the Concealed Carry Reciprocity Act of 2017, and H.R. 3668, better known as the SHARE Act.

On its website, Everytown says concealed carry reciprocity—in which your concealed carry permit would be valid in all 50 states, similar to a driver’s license—”would allow people to carry hidden, loaded handguns in public throughout the country without ever getting a permit, passing a background check or receiving gun safety training.”

The SHARE Act—an omnibus bill that contains the Hearing Protection Act as a provision that would remove suppressors from NFA regulation, eliminate the $200 transfer tax and replace the transfer process with an instantaneous NICS background check—”would make it easy for anyone — including domestic abusers and felons — to get a silencer,” Everytown says.

Watch the video above. 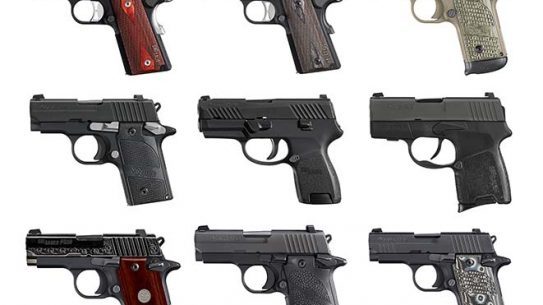 A rundown of nine subcompact Sig Sauer pistols that are easy for the user...