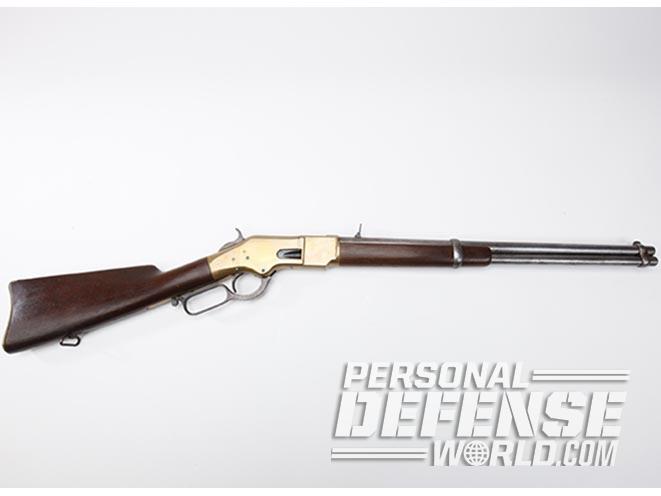 1 of 7
Photo by All photos courtesy NRA Museums
Winchester Model 1866
Number Made: Approximately 170,000; Years Of Production: 1866 to 1898; Identifying Features: Brass frame, no sideplate, half-oval loading gate; This model holds the distinction of being the first gun made under the Winchester name, and it’s a direct descendant of the Henry lever-action rifle. A handguard and loading gate patented by Winchester factory superintendent Nelson King in 1866 were the major alterations in creating what became the Model 1866. The loading gate made for faster and easier reloading while the handguard saved the shooter’s hand from the scorching metal of the magazine tube. Because of its unique brass frame, this gun was often called the “Yellow Boy” on the American frontier. Rifles and muskets chambered for the .44 rimfire cartridge carried 17 rounds, while carbines held 13. 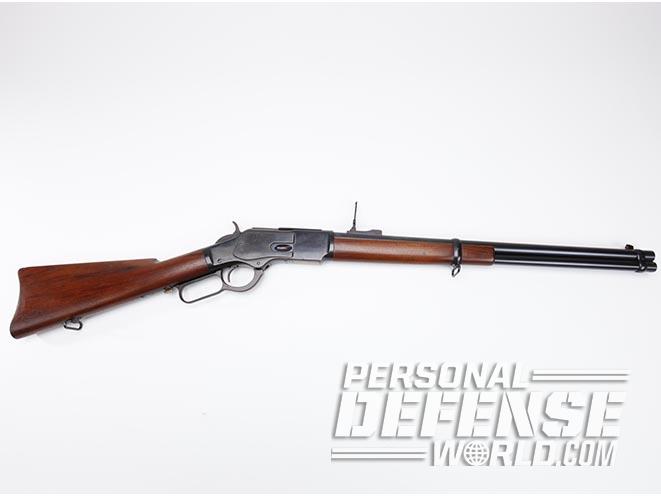 2 of 7
Photo by All photos courtesy NRA Museums
Winchester Model 1873
Number Made: Approximately 720,000; Years Of Production: 1873 to 1919; Identifying Features: Irregularly shaped sideplate with pointed lower-left corner, full oval loading gate; Sometimes called “The Gun That Won the West,” the Model 1873 was the first Winchester to use centerfire cartridges (as opposed to rimfire) and to have an iron frame with a removable sideplate. The gun came in a variety of standard configurations, including the 20-inch round-barrel carbine, 24-inch octagonal or round-barrel rifle, and the 30-inch round-barrel musket. Standard calibers included the .44-40 (also known as the .44 Winchester Center Fire), .38-40 (.38 WCF) and .32-20 (.32 WCF). Early Model 1873s were only available in .44 WCF, so these guns do not have caliber markings. But with new calibers, markings were emblazoned on the barrel, just in front of the receiver, and on the brass elevator.As the Model 1873 fired pistol-caliber cartridges, many owners benefitted from the convenience of only having to carry one caliber for both rifles and revolvers. Between 1884 and 1904, .22 rimfire models joined the lineup, with fewer than 20,000 made.Premium-quality guns had “One of One Thousand” or “One of One Hundred” markings. Particular care went into these guns to ensure the highest-quality assembly and the best possible accuracy. Only 136 “One of One Thousand” and eight “One of One Hundred” Model 1873s ever emerged.Plenty of famous figures in the Wild West owned Model 1873s. In 1880, William H. Bonney—better known as “Billy the Kid”—posed for his only known photograph. In it, he has a holstered revolver and a Winchester Model 1873 rifle. In 1883, Buffalo Bill began his traveling Wild West show. One of the many guns he used during this period was an engraved and gold-plated Model 1873 in .44 WCF. The gun’s engraving features a picture of Buffalo Bill himself on horseback while hunting bison. 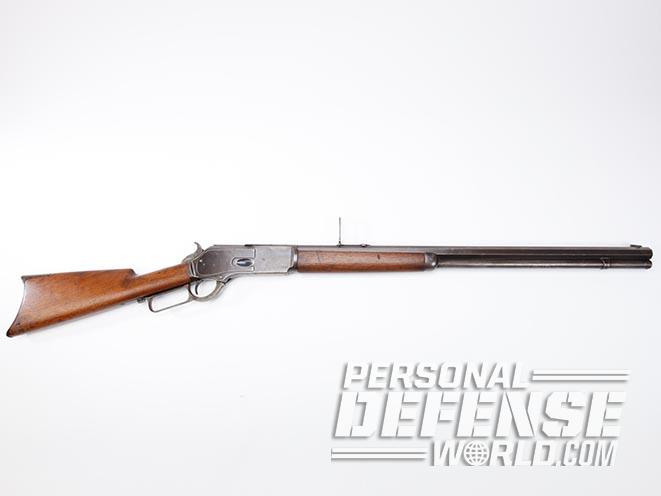 3 of 7
Photo by All photos courtesy NRA Museums
Winchester Model 1876
Number Made: Approximately 63,800; Years Of Production: 1876 to 1897; Identifying Features: Irregularly shaped sideplate with rounded lower-left corner, full oval loading gate; Essentially just a bigger version of the Model 1873, the Model 1876 featured a larger and stronger receiver to handle big calibers like the .45-77 WCF, .50-95 Express, .45-60 WCF and .40-60 WCF. This rifle’s ammunition was not compatible with revolvers—a small sacrifice toward gainining a rifle with more punch. The Model1876 was available with different barrels: 32-inch round-barrel musket; 28-inch round, octagonal or half-octagonal sporting rifle; 26-inch round, octagonal or half-octagonal express rifle; and 22-inch round-barrel carbine. This rifle was also the first Winchester model available with a pistol-grip-style buttstock. Like the Model 1873, premium-quality Model 1876s had “One of One Thousand” or “One of One Hundred” markings on the barrel. Winchester only made 54 of the former and eight of the latter. Theodore Roosevelt said the Model 1876 was “by all odds the best weapon I ever had, and now I use it almost exclusively.” His first custom order from Winchester was in 1881—a consecutively numbered pair of 1876s. He ordered another 1876 that he was very fond of—serial number 38647—in 1884. The rifle, chambered in .45-75, had a half-octagonal barrel and a half magazine. It also had a color-casehardened receiver, checkering on pistol grip and forend, and fill engraving by John Ulrich. Roosevelt posed for many photos with this gun. 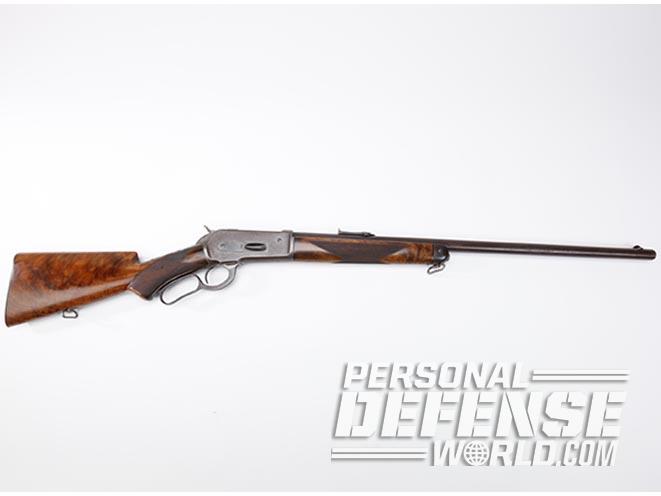 4 of 7
Photo by All photos courtesy NRA Museums
Winchester Model 1886
Number Made: Approximately 160,000; Years Of Production: 1886 to 1935; Identifying Features: Solid frame with no sideplate, full oval loading gate; The Model 1886 was John Moses Browning’s first attempt at a high-powered lever-action rifle. Distinguished by its vertical locking bars, this model was designed to take the caliber advantage of the 1876 one step further. These rifles were capable of firing even more powerful cartridges suitable for big game, such as the .45-70, .45-90 and .50-110. The Model 1886 came in 10 calibers, which made the rifle very popular with hunters in the American West. To aid in portability, Winchester created several versions of the 1886, including takedown and lightweight versions. But, in the 1930s, evolving cartridge designs and high Depression-era production costs doomed the Model 1886. Color casehardening was standard on these receivers until 1901, with serial numbers reaching up to approximately 122,000. Blued finishing replaced casehardening as standard in 1902 until the end of production in 1935. The first Model 1886, serial number 1, holds the record for the highest price ever paid for a single firearm. Sold in April 2016 by the Rock Island Auction Company, the rifle fetched $1,265,000. 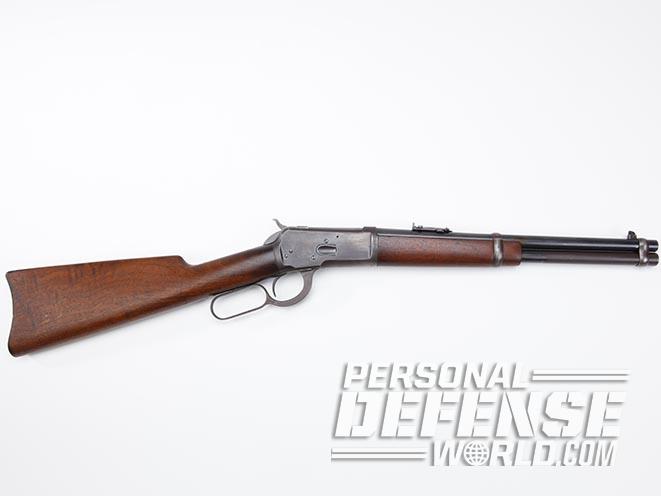 5 of 7
Photo by All photos courtesy NRA Museums
Winchester Model 1892
Number Made: Approximately 1 million; Years Of Production: 1892 to 1945; Identifying Features: Solid frame with no sideplate, half-oval loading gate; This model was a scaled-down version of the Model 1886. It was also the first Winchester rifle designed for smokeless-powder cartridges. The rifle came in the same lower-powered calibers as the Model 1873, plus the .25-20, but the .44-40 variant was the most popular. This model was destined for fame on both the small and big screens in the hands of cowboys and outlaws alike. The Model 1892 was anachronistic in some Westerns, but that little detail didn’t matter because of the rifle’s ability to fire 5-in-1 blanks. John Wayne’s Rooster Cogburn character in True Grit carried a Model 1892, as did Chuck Connors’ character Lucas McCain in the TV series The Rifleman. Annie Oakley used a Model 1892 during her performances in Buffalo Bill’s Wild West show. Chambered in .44-40, her rifle was elaborately engraved, sported a half-octagonal barrel and had a shotgun-style buttplate. “Little Miss Sure Shot’s” rifle was a smoothbore and had no rifling because she used birdshot during performances to avoid the risk of errant rounds injuring spectators in the arena. 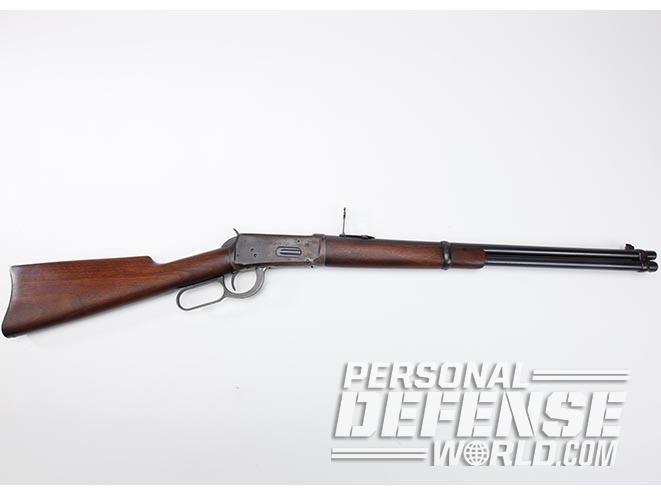 6 of 7
Photo by All photos courtesy NRA Museums
Winchester Model 1894
Number Made: Approximately 7 million; Years Of Production: 1894 to 2006; Identifying Features: Solid frame with no sideplate, three-quarter oval loading gate; The Model 1894 came in a variety of calibers, but more than 80 percent of them were chambered for the .30-30 cartridge—a pairing that would form the quintessential American deer rifle during much of the 20th century. Indeed, it’s still popular among many hunters. Thus, the Model 1894—later called the “Model 94”—is the first commercial sporting rifle to sell more than 7 million units. In 1924, the Model 55, a Model 94 variant, replaced the 94 until production ceased in 1932. Then, the Model 64 was introduced as a replacement in 1933 with two different periods of manufacture: 1933 to 1957 and 1972 to 1973.  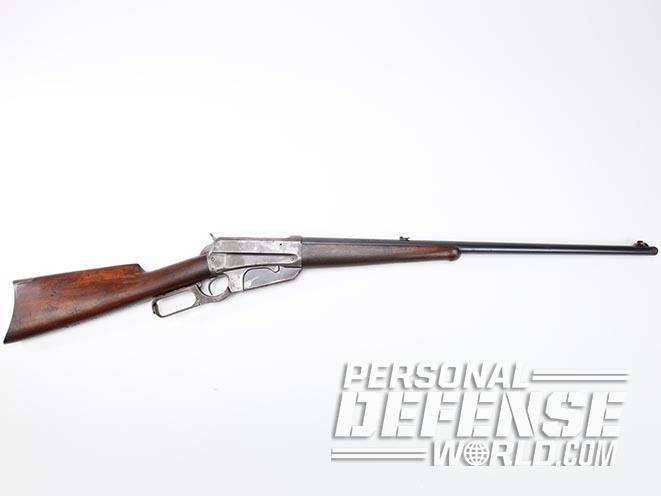 7 of 7
Photo by All photos courtesy NRA Museums
Winchester Model 1895
Number Made: Approximately 425,000; Years Of Production: 1895 to 1940; Identifying Features: Box magazine below the action, no loading gate; Patented by John Browning in November of 1895, this rifle was a departure from Winchester’s previous offerings—both functionally and visually. The Model 1895 was the first Winchester rifle to incorporate a box magazine below the action. All previous models had a tubular magazine that loaded cartridges tip-to-primer, which was fine for earlier cartridges with flat- or round-nose bullets. The Model 1895, however, accepted higher-powered spitzer cartridges with pointed-nose bullets, and loading pointed bullets tip-to-primer increased the potential of an accidental primer detonation. But, by incorporating a box magazine, the cartridges could be stacked horizontally, curbing the risk of primer mishaps. The Model 1895 had two distinct frame styles. Rifles made between 1895 and 1896, within the first 5,000 models, sported a “flatside” frame with no fluting or ridge contours. The remaining 420,000 rifles had frames with fluting and ridges. The Model 1895 was another favorite of Theodore Roosevelt. He used one on his 1909 African safari that was chambered in .405 Winchester. 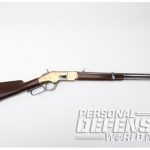 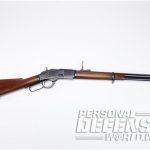 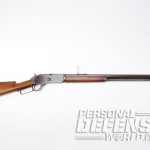 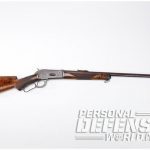 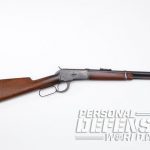 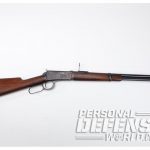 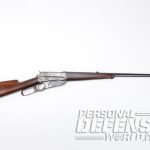 Some of the most visually and culturally iconic lever-action rifles in American history sprang from the New Haven, Connecticut, company established in 1866 through the leadership of savvy entrepreneur Oliver Winchester. But unless you’re a lifelong student of Winchester Repeating Arms Company, it can be hard to understand how the various rifles differ. What follows in the gallery above is an effort to help identify different models so you can tell them apart visually and learn some of the history behind each one. The list is by no means exhaustive, but it’ll ensure you don’t confuse a Winchester lever-action Model 1876 with a Model 1894, or a Model 1873 with a Model 1886.

There are far more variations in barrel lengths, shapes, calibers, metal finishes and wood grades than could be covered here. Despite the many differences between the models, there is one feature that they all share: Carbines have barrel bands while rifles and muskets have caps.

While this article was not intended to be the definitive source on Winchester lever-action rifles, I hope it provides enough information to pique your interest so that you’ll seek out one of the many weighty tomes about Oliver Winchester and his ubiquitous rifles. But a word of caution: A bite from the collector bug leads to a lifelong affliction.

This article was originally published in “The Complete Book of Guns” 2018 #200. To get a copy, visit outdoorgroupstore.com. 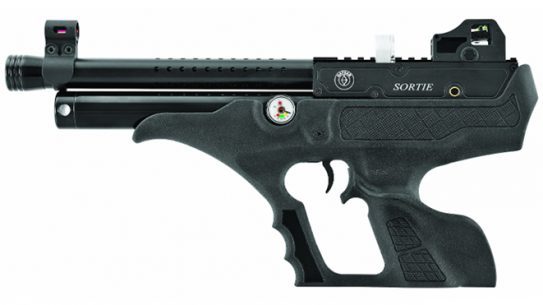 HatsanUSA follows up the release of its Barrage and BullMaster semi-auto air rifles earlier...